The idea of making a live action movie based on a manga or anime series has been around for years. Back in 2012, a film called “Rurouni Kenshin” came out and stood out from the rest however. It’s based on a popular Shōnen manga of the same name (also known as “Samurai X”) written and illustrated by Nobuhiro Watsuki. Steeped deeply in samurai culture and Japanese history, the manga did well at capturing action, adventure, drama, and even comedic moments. Following in its footsteps while wearing its own shoes, this adaption brilliantly walks the fine line of recreating those superb qualities while also showcasing itself as a stand-alone great.

Takeru Satoh stars as the masterful swordsman known as Kenshin Himura. Alongside him, Emi Takei takes on the role of Kendo school owner Kaoru Kamiya. Munetaka Aoki comes in as Sanosuke Sagara, the street fighter who loves to slug it out (and also enjoys a good break to devour food and drink). Another fighter with a lot of heart is Taketo Tanaka’s character; the young, street-smart and smart-mouthed Yahiko Myojin. Yōsuke Eguchi does well in his role as Hajime Saito, a police officer working for the Meiji government who has a past that intertwines with the main protagonist’s. Yū Aoi steps into the role of Takani Megumi, a beautiful healer who is forced to make opium for the bad guys. Speaking of bad guys, Kōji Kikkawa captures the menacing presence of the blood-thirsty revenge driven Jin-e Udo quite well. Teruyuki Kagawa adds to the list of baddies, playing the greedy and ruthless businessman Takeda Kanryū. By his side, Go Ayano stars as Gein and Genki Sudo as Banjin Inui.

Formerly a legendary man-slayer during the time of the Bakumatsu war, Himura Kenshin now strives to live a peaceful life, wandering around and helping those in need. After vowing to never kill again and leaving his old sword behind along with his bloody past, he now travels the countryside of Japan with a reverse-bladed sword, a sword seemingly incapable of killing, at his side. The past isn’t as keen on letting go however. A greedy business with an opium scheme and an old adversary carrying his previous blade come into his life, testing the limits of how far Kenshin can go without breaking his no-kill vow.

Kenichi clashes with an assailant who stands in his way

Even against rough thugs Kenshin keeps his sword under control

Kenichi pauses after striking down an opponent

A touch of Zen

Have you ever watched a comedian perform live? What really gets a belly laugh isn’t always the structure of the joke but how it is told, the small details that accompany the joke. With Rurouni Kenshin, it’s a similar thing. The choreography alone is highly entertaining and refreshing! That isn’t the end though, what truly elevates this is how it is all executed. Speed and precision accentuate the fight choreography that is portrayed and one can truly believe many of the characters are hardened fighters when watching the movie. Each fight is entertaining for more than the prospect of a violent blow however.

Whether it’s the pacing of a fight that leads to a comedic mid-fight break or the look on a thug’s face as he is about to receive a blow so powerful it seems like it would make Bruce Lee wince in sympathetic pain, “Rurouni Kenshin” finds ways to add bits of humor to even the most thrilling fights.

Tension builds in the forest 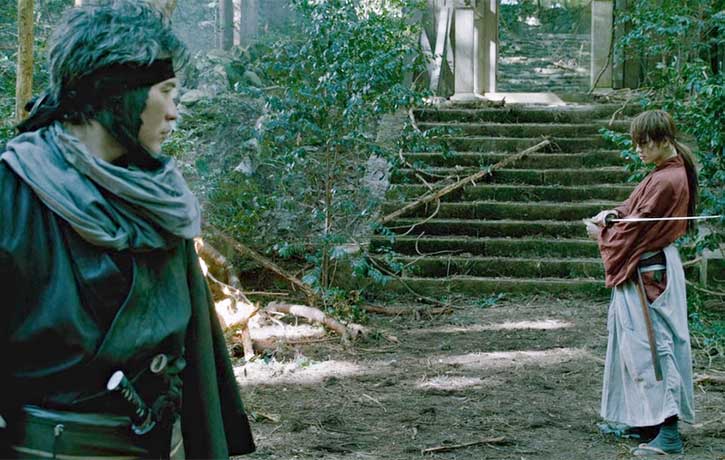 Many of the action scenes are accompanied by a slow-mo moment to highlight the peak adrenaline moments. While this can be an excellent finishing touch that complements an already exciting fight, the amount of reliance on it comes close to being a little too much. Though a little more restraint with the effect would have helped, the movie stops shy from using it to an intolerable level. From beginning to end, a full spectrum of emotions are directed by the beautiful music played in the background of casual everyday moments, life or death battles, and everything in between.

The bad guys seem to have an advantage

Fake Battousai gets ready to strike

During some of the more heartfelt moments, the music flows into the foreground, guiding emotions while there is no dialogue from the characters. A flashback to Himura Kenshin’s days as an assassin showcases this well, accentuating the reveal of why he has the “X” shaped scar on his cheek. The fact that the film can simply use pacing and music to orchestrate emotion is a testament to the value of this film. No mean feat.

An exhilarating samurai adventure set in the early days of the Meiji Restoration, this is a must watch for anime fans, movie goers and martial arts nerds of all ‘styles’!

Kenichi contemplates the consequences of his actions

Noodle dish of the day

The reveal of a game changing weapon

Have you seen “Rurouni Kenshin”? What did you think of the live-action portrayal of this beloved sword-wielding manga character? What are your favourite samurai or sword-fighting flicks? Let us know in the comments below; Like, share and join in the conversation on Facebook and follow us on Twitter & Instagram. SAMURAIS and wandering warriors…swing your sword with style, and point it to the FUNIVERSE, check out these Top 10 Samurai movie fights, master your skills whilst garbed in KFK gear, and don’t forget to subscribe for videos on YouTube!