Drop “John Wick” down into the late 80’s and perform a quick gender swap, and “Atomic Blonde” is what you get: a Cold War-era spy thriller which solidifies Charlize Theron’s place right next to Cynthia Rothrock, Michelle Yeoh, Sigourney Weaver and Linda Hamilton in the tough chick Hall of Fame. Though first and foremost a spy caper that slows things down more than it should in parts, “Atomic Blonde” boasts some of the hardest hitting action sequences of 2017 and, like “John Wick”, makes a compelling case that stunt veterans should henceforth have the right of first refusal on directing action films in Hollywood.

Berlin, 1989. With the Berlin Wall on the verge of collapse and the Cold War nearing its end, British MI6 agent James Gascoigne is murdered by Russian KGB agent Yuri Bakhtin, stealing from him “The List”, which identifies every active intelligence agent in Berlin. MI6 dispatches Gascoigne’s fellow agent Lorraine Broughton to Berlin to retrieve The List, with the assistance of Berlin-based operative, David Percival. Over the course of her mission, Broughton loses allies, gains new ones and finds herself battling through hordes of opponents single-handedly on multiple occasions. 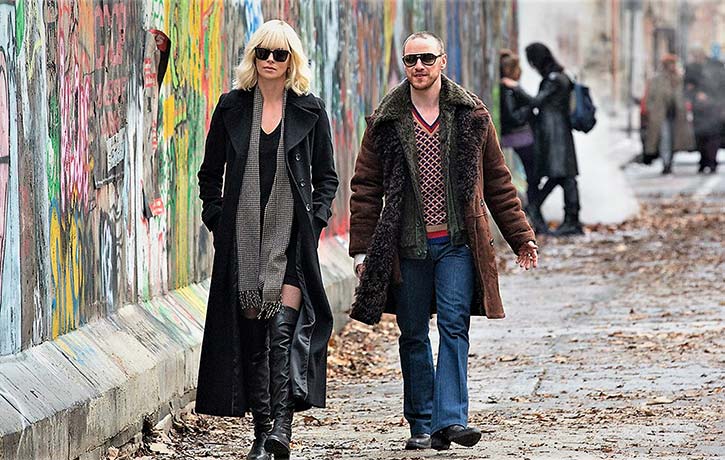 Broughton takes on two opponents at once

“Atomic Blonde” is most definitely a spy thriller first and an action film second and the pacing of the film certainly leans more towards the former. The story is told in a non-linear manner, with Broughton recounting the events of the film to her superiors in an interrogation room, while flashing back to her operations in Berlin. While the comparisons it earned to “John Wick” are fully warranted – so much so that “Jane Wick” would have been a perfectly fitting title – “Atomic Blonde” is much more measured in the bursts of action it unleashes on you.

None of this is to say that it’s a lacklustre actioner, but you should enter the film with the understanding that the approach the film adopts is akin to watching a geyser burst – you have to be patient for the payoff to arrive, but you most certainly get your money’s worth when it does. Charlize Theron’s performance is curiously indicative of the feel of the film overall – she consistently speaks in a tone of voice just barely above a whisper, and remains as cold and poker-faced as the film’s nearly black-and-white cinematography. However, when the time comes to get physical, she and the film absolutely explode into a hard-hitting action machine that leaves Berlin littered with dozens of faceless henchmen either as dead as a doornail or writhing in pain.

The first big set piece of the film sees Broughton going head-to-head with a cadre of adversaries in a vacant apartment complex, with a rope and the swinging door of a refrigerator as her primary weapons. The brawl leaves the place so thoroughly trashed that you come just one centimeter shy of thinking that Ms. Theron didn’t get to smash enough heads in “Mad Max: Fury Road”.

She also throws down in a handful of other fight sequences in the film, including one in the backseat of a taxi where her opponent finds himself on the wrong end of the heel of her stiletto. That said, the centrepiece of the film and by far one of the most incredible action sequences of 2017, is the second act stairwell brawl where Broughton battles her way to the bottom floor past a veritable army of enemies. 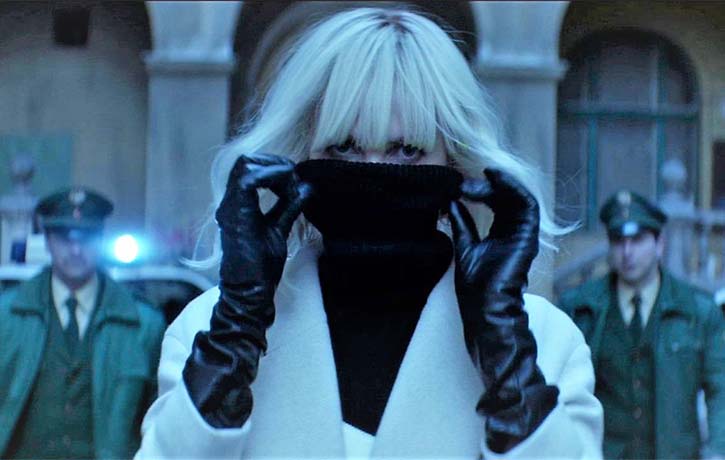 Get ready for a disguise

Blasted up yet still up for the ride

Broughton brings down her determined enemies

The stairwell fight, which plays out like “Daredevil“, “Old Boy”, and “The Raid” all rolled into one, is so packed with adrenaline and gob-smashingly brutal that you may very well think it was singularly constructed for the sole purpose of crafting this single sequence into an all-time Hall of Famer, a goal which it unquestionably achieves.

As is the case for the rest of the film, Ms. Theron refuses to relegate the dangerous stuff to a stunt double and is very clearly right in the thick of the action from start to finish. She most certainly takes as good as she gives, especially by the end when “John Wick” and “Bloodsport II” star (Bernhardt) steps into the dance to give Broughton her most challenging single opponent yet. It’s no easy task to craft a single action sequence that moviegoers will be wowing over for years to come, and “Atomic Blonde” absolutely smashes its way into the action movie history books with its crowning achievement of bashing heads in!

“Atomic Blonde” isn’t a non-stop action film, but that doesn’t stop it from blowing viewers away with show-stopping fight sequences that rank among the best of last year. The film holds off on its most pulse-pounding battles with a sharp sense of tact leaving jaws agape when it finally does let them rip out of the cage -between Lorraine Broughton and Imperator Furiosa, Charlize Theron more than earns her star on the action heroine Walk of Fame! 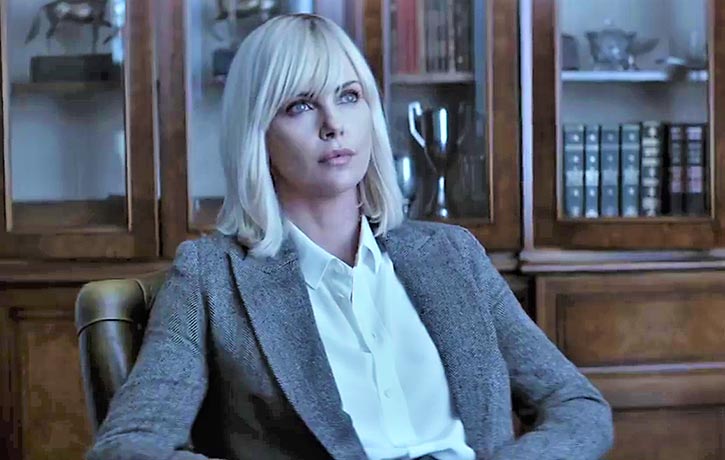 Broughton has spent years as an MI6 agent 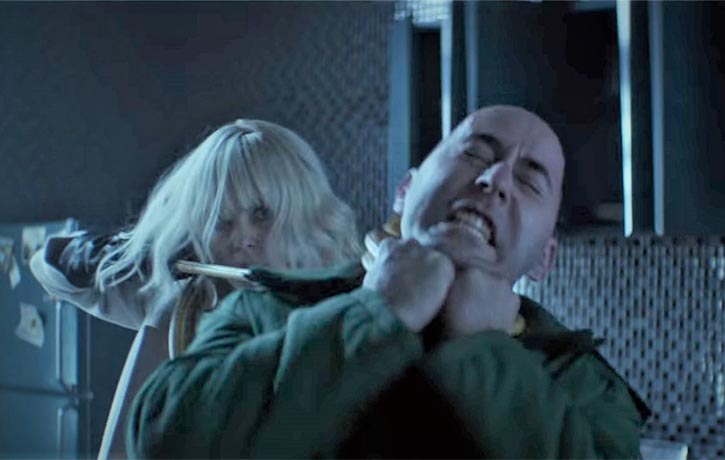 Broughton can turn anything into a weapon of war 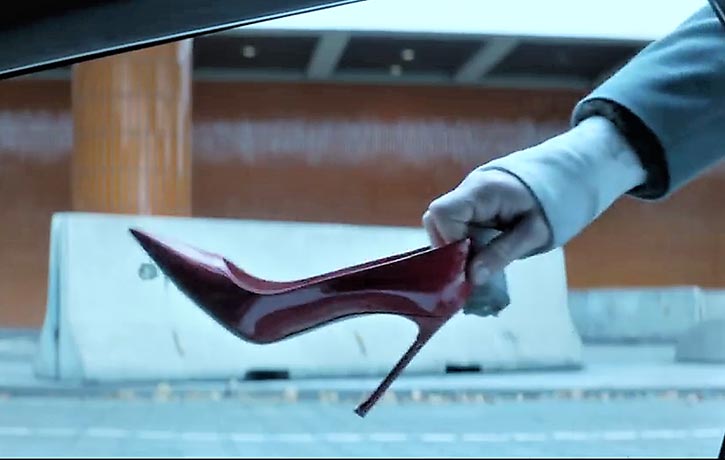 Percival waves a red flag of surrender for Broughton 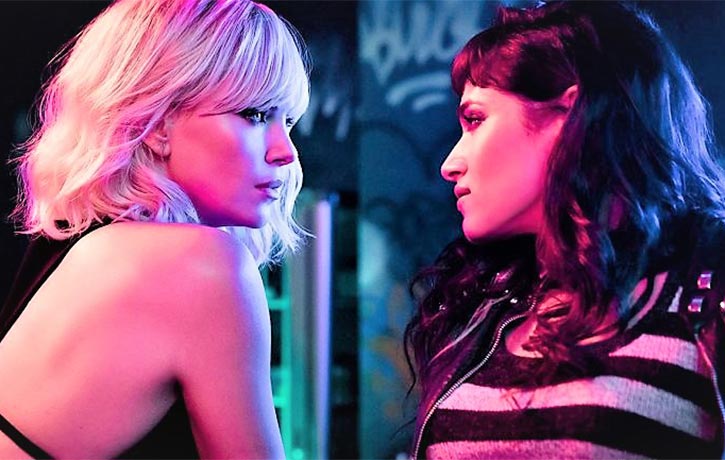 Broughton isnt the only spy in Berlin

Today Broughton is an Atomic Redhead

Broughton and Percival blend into the world of Berlin

Seen “Atomic Blonde”, what did you think of Charlize Theron’s onscreen fighting performance? Let us know in the comments below, join in the conversation on Facebook and follow us on Twitter (don’t forget to check out our previous movie reviews)!