Sometimes it can be hard to know if martial arts actors are just on-screen tough guys or actually the real deal. There can be no debate that the multi-talented Olivier Gruner falls into the latter category.

Not only was he a kickboxing World Champion but he was also in the Special Operations Force of the French Navy, their version of the Navy Seals. In this elite outfit Gruner trained in boat assault techniques using zodiacs, all of this being accomplished before he turned thirty.

He then turned his attention to films with “Angel Town” being his first role. This fish-out-of-water, street-level actionfest allowed him to break into the movie industry and showcase his skills to a far wider audience.

Olivier Gruner takes on the role of Jacques Montaigne, a French student who comes to Los Angeles for graduate studies at the University of Southern California but gets embroiled with a local gang that is threatening the family of his landlady Maria Ordonez, played by Theresa Saldana.

Uzi-toting gang leader, Angel, played by Tony Valentino, is trying to force Maria’s son, Martin, portrayed by Frank Aragon, to join the ranks. In the hopes of preventing this, Jacques takes on the violent gang with the help of old friend and martial arts gym owner Henry Lee, played by Peter Kwong.

Jacques Montaigne a stranger in a strange land

Stepping into the role of Henry’s wife, Sue Kim, is Linda Kurimoto. The cast is rounded out by Mike Moroff who takes on the role of gutsy disabled veteran, Frank, who also backs up Jacques, and by Gregory Cruz who plays another gang leader, Stoner.

Jacques Montaigne has barely arrived in Los Angeles when he runs afoul of a vicious local gang that is terrorizing the neighbourhood where Jacques is planning to live.

The gang’s main objective? To coerce young Martin Ordonez into their murderous mob thorough a constant campaign of intimidation against him, his mother and his grandmother. When the Ordonez’s house is the only place where Jacques can find a room to rent, he is thrust into the middle of the conflict.

Jacques and Henry take Martin under their wings

Luckily, he’s not in Los Angeles just to study. He’s also a world kickboxing champion and there to train some fighters at his friend Henry’s gym for the next Olympics. That means he’s got some useful skills necessary to fight back against the gang.

On top of that, Jacques can identify with Martin’s plight. Like Martin, Jacques’ father was also killed by a gang so taking on Angel and his cohorts has a more personal edge. But with many members in the gang, Jacques can’t fight them all on his own. He enlists Henry’s help to not only lend a hand in protecting Martin but lend fist and feet in taking the fight to the gang in an attempt to end their reign of terror once and for all.

“Angel Town” does take a good twenty minutes to set up the situation and characters before delving into the first proper fight scene, but from there on in, the action is pretty consistent.

Even though gang leader, Angel, always has his uzi on hand, almost all of the conflicts are unarmed rather than armed, which is a great thing for the martial arts enthusiast. There are some shoot-outs, but Jacques himself relies on punches and kicks to deliver punishment.

It might seem a bit of a contrivance that, apart from Angel, the gang does not use guns, but it is a forgivable scheme as it does not detract from the movie and the fight scenes are solid throughout.

Jacques and Martin hunted through the inner city

When the first fight scene graces the screen, Gruner’s fighting style is immediately evident. Being a world champion kickboxer, it will come as no surprise that kickboxing is the specific method he uses to deliver beatdowns on gang members that are harassing students at a university ball. When things get physical and Jacques is forced to step in, among the techniques he employs are elbow strikes, side knees to the torso, rapid fire low roundhouse kicks and a Muay Thai clinch with powerful knee strikes.

While Gruner does mix some techniques from other styles, for example a wrist lock to counter an incoming knife attack, the vast majority of attacks in “Angel Town” are kickboxing or Muay Thai in origin.

Sometimes in martial arts movies, actors draw on an eclectic range of moves from different styles to make the fight scenes more varied and interesting. This, of course, can be a good thing and lead to some exciting encounters, but there is something to be said for a uniform and identifiable style throughout a movie. Probably the most flamboyant moves Jacques executes are spinning crescent- kicks and high-spinning back kicks. Gruner, keeping his style consistent, adds a layer of believability and realism to his character and to the movie in overall.

There are numerous battles throughout the film culminating in a pulsating confrontation where Jacques, Henry and his students take on the gang in a mass brawl. Peter Kwong (Henry) is a talented martial artist in his own right along with being a dancer and choreographer so his skills and agility really add to the final battle – providing a satisfying cap off to this entertaining action movie.

Jacques turns the tables on Angel

Lets see what you got

While “Angel Town” may not have created as big a splash as “Bloodsport” (1988) did for Jean-Claude Van Damme or as “Above the Law” (also 1988) did for Steven Seagal, it is nonetheless an enjoyable and solid lead debut for Gruner.

Jacques is a likeable main character and Gruner carries a magnetic presence. His kickboxing skills, athleticism and dexterity really make for some very physical and engaging fight scenes. Also, the movie does a great job of making you loathe the gang and sympathise with the Ordonez family, especially the long-suffering mother, Maria. This adds a more visceral, primal component to the combat. You really want Jacques to punish the villains which he summarily delivers in no uncertain terms across the length of the movie. If you haven’t already done so, this film is well worth checking out or revisiting if you love your martial arts flicks!

Jacques avoids a bomb meant for him

Maria Ordonez and son Martin live in fear of the gang

Things not going to Angels plan 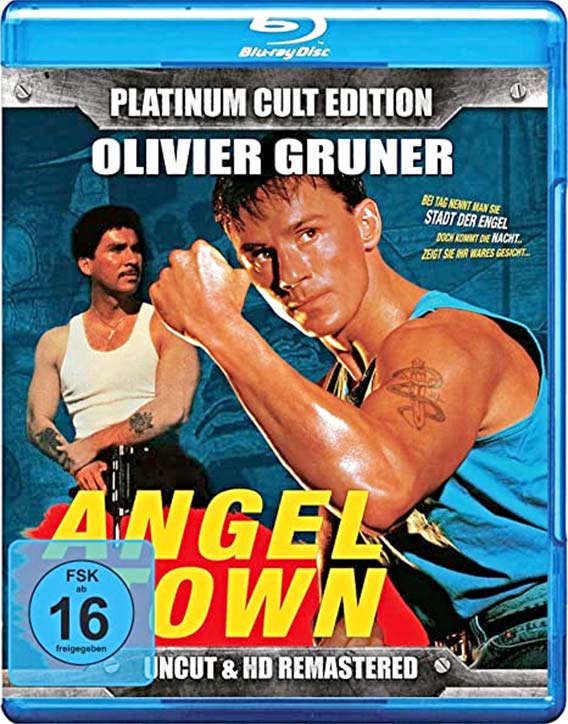 You can order this title via Amazon on Blu-ray!

DO YOUR PART TO KEEP UP THE FIGHT AGAINST THE CORONAVIRUS to restore our angel town! Meantime take refuge a FUniverse of news, Top 5’s, Top 10’s, interviews, order your KFK Official gear online and subscribe for more virus-beating fight action on YouTube!