As any anime or manga fan can tell you, bringing either medium to life is a tricky proposition on a good day, but then by the same token, nobody does live-action cartoons better than the Japanese. Based on Hideaki Sorachi’s eponymous manga series, “Gintama” brings its source material to life with a vigor and energy worthy of “Tai Chi Zero” and “Scott Pilgrim vs The World“!

Leading the way is Shun Oguri as the heroic former Samurai, Gintoki Sakata. Kanna Hashimoto and Masaki Suda step into the roles of his close friends, Kagura and Shinpachi Shimura. Takayuki Yamada provides the voice of the living duck mascot, “Elizabeth”, while villainous duties fall to Hirofumi Arai in the role of Nizo Okada, who finds himself possessed by a mystical katana that Japan’s new occupiers will stop at nothing to get their hands on.

In an alternate timeline, Japan falls victim to a massive alien invasion during the Edo period, seizing control over the land and forcing all samurai to lay down their arms.

Once known as the “White Demon”, former samurai Gintoki Sakata nows makes a living as a handyman, but he inexplicably finds himself thrust back into the life of a samurai. A mysterious swordsman tasks him with keeping a cursed sword with supernatural abilities out of the hands of the alien invaders intent on getting their hands on it to strengthen their grip over the world. With the help of his good friends Kagura and Shinpachi Shimura, Gintoki takes up the mantle of the “White Demon” once more to keep the mystic relic from falling into the wrong hands. 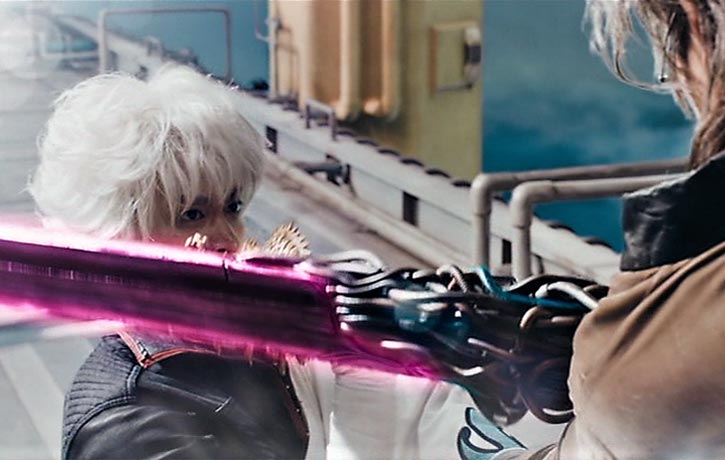 Gintoki must think quickly to get out of this

Most adaptations of a popular source material make the leap to live-action with the understanding that they’ll need to make some kind of stylistic transition from one medium to another, but not “Gintama”. The film adapts the visual and narrative outlandishness of the manga and anime that spawned it with such a degree of literalism that you’d swear that the Wachowskis had some kind of creative input.

The film wears its out-and-out craziness and visual insanity as a badge of honor; not two minutes go by without the film incorporating either some cartoonish sound effects or heavily stylized CGI (though admittedly, its rather hit-and-miss quality-wise in this regard) into the action sequences or as a tool to punctuate the dialogue – or sometimes, just simply because it can.

If you’re the type of fan who prefers adaptations of their favourite IP to be painstakingly literal in how closely they hew to the source material, you’ll leave “Gintama” one happy camper, while everyone else will be in for a live-action cartoon in the “Who Framed Roger Rabbit” sense of the term. 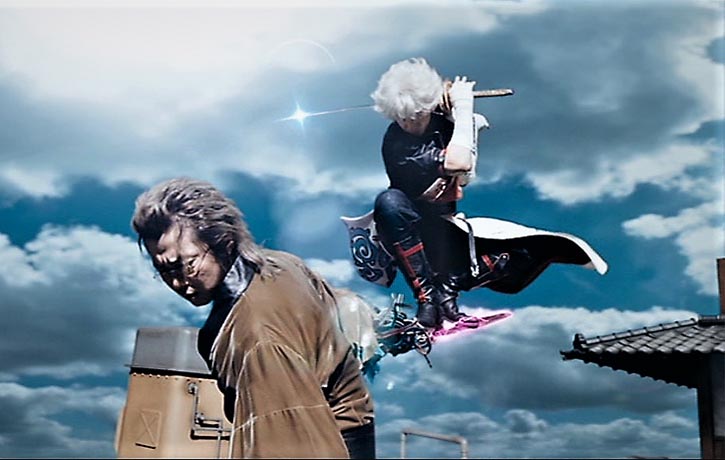 Gintoki gets the drop on his enemy

The film is no less nuts in its plentiful katana-based fight sequences, and in fact, this is where “Gintama” is most eager to ratchet up its wackiness. Not even the delightfully bonkers “Kingsman” films had this flagrant a disregard for the laws of gravity and physics. Pinning down the film’s best action sequence would be hard, as “Gintama” only gets more and more unorthodox as it goes along – no small feat for a film that features a man in a life-sized beetle suit in its first fifteen minutes.

Gintoki’s opening rescue of Shinpachi sets the tone for what kind of action madness the film has in store for the viewer, and indeed, the first sword duel between Gintoki and Nizo is probably about as close as the film gets to “down to Earth” in either the action or the overall tone. The last third is where the film really offers up the best of what it has to offer, with Kagura and Shipachi battling an army of opponents aboard a flying cruise ship before being joined by Gintoki.

Perhaps the most understated success of “Gintama”, however, is how well the action is captured on screen. This is especially true in the final one-on-one duel between Gintoki and a traitor in Japan’s midst, with the camera sweeping and encircling both combatants to capture the over-the-top action in superb detail. In a film where the term “subtle” doesn’t apply whatsoever, it’s a reminder of the value of keeping shaky cam and overly fast editing to a minimum, executed with great subtlety!

Gintoki lives by the way of Bushido

Gintoki holds his own in the fight

Gintoki with a super polite greeting 1

Gintoki comes in with a backhanded strike

Gintoki clashes blades with his foe

Gintoki Kagura and Shipachi go on a bug hunt

For anime and manga fans (also known as “otaku”), “Gintama” is the stuff that dreams are made of. Meanwhile, martial arts fans and casual viewers alike can delight at the astonishing levels of “Looney Tunes” action insanity that the film dishes up. Although a little longer than it needs to be, and marred by some CGI of the below-average variety, if it’s an evening of utterly wacked-out action-comedy zaniness you crave, you could do far worse than “Gintama”!

What’s your favourite manga or anime-based movie, which other manga or anime would you most like to see adapted to live action? Let us know in the comments below, join in the conversation on Facebook and follow us on Twitter. (Be sure to check out our check out our other reviews for more FU-mongous action!)