If my calculations are correct, it’s been approximately forty-six years since the passing of the legendary Bruce Lee – meaning that the arrival of “Warrior” on Cinemax is very likely the longest stretch of time between the conception of a television series and is eventual debut. Remember the next time you hear someone drop the phrase “Good things come to those who wait”, that the ten episodes that make up “Warrior” is some of your best evidence of that claim available!

Ah Sahm tries to adapt to his new life in America

San Francisco, 1878. When Ah Sahm arrives to the local port of entry, he’s just another Chinese immigrant viewed with disdain by the local authorities. However, after fending off an attack by some hostile customs officials, Ah Sahm attracts the attention of Young Jun, son of the leader of the local Hop Wei gang, and swiftly finds employment as an enforcer with them.

However, Ah Sahm’s real quest in San Francisco is to find his estranged sister Xiao Jing, only to discover that she now goes by the pseudonym “Mai Ling” and is married to Li Yong, enforcer to the rival Long Zii gang, and has no interest in abandoning her new pampered lifestyle to return to China with her brother. Ah Sahm’s challenges only escalate when he is arrested after fighting off an assault on Penelope Blake, the wife of San Francisco’s mayor. Though both her husband and the local police view Ah Sahm with hostility due to his immigrant status and association with the Hop Wei, Penelope is determined to come to the aid of her heroic rescuer.

The first thing that jumps out about “Warrior” in its first twenty minutes is that the show has absolutely no intention of holding anything back. On top of fight sequences as hard-hitting and brutal as anything shown in the likes of “Daredevil” or “The Night Comes For Us”, “Warrior” is very much an adult-oriented series, packed to the gills with F-bombs, drug abuse, and sexual content.

To be clear, none of that is gratuitous, especially given the period setting and backdrop of the Tong Wars, but it’s genuinely surprising just how much “Warrior” rivals the recently concluded “Game of Thrones” in pushing the envelope.

While it’s no secret that the show is a product of the mind of Bruce Lee, “Warrior”, very much to its benefit, also doesn’t go out of its way to constantly remind viewers of that fact, and really allows Andrew Koji to stand on his own in the role of the poised and stoic Ah Sahm.

Our hero is a man who never speaks without having something to say, but who also doesn’t stay silent in the face of injustice, whether toward himself, his fellow Chinese immigrants, or the Mayor’s wife. Virtually every episode puts him in some kind of scenario of having to maintain his cool for an extended period and only striking when the timing is right, and Koji absolutely nails Ah Sahm’s internal struggle of yearning to battle the prejudice facing the local Chinese while doing so in a way that doesn’t do more harm than good to his cause.

It’s also fun to see the little Easter Eggs to Bruce Lee’s filmography sprinkled about whenever “Warrior” does decide to tip its hat to him, and how well Andrew Koji handles the task in each case. (My personal favorite is the homage to Roper’s enthusiastic response to Mr. Han’s concubines in “Enter the Dragon” – you’ll know it when you see it!)

When it comes to the show’s plentiful martial arts action, “Warrior” more than lives up to its title. It’s barely five minutes into the first episode when Ah Sahm puts his foot down, literally and figuratively, on a gang of local cops harassing him and his fellow immigrants just off the boat. Being a Cinemax series, “Warrior” absolutely relishes the absence of handcuffs, and under Brett Chan’s action direction, the fights are as exquisite as they are punishing.

In the role of Li Yong, Joe Taslim is a real showstopper whenever he’s on-screen, and he easily positions himself as the villain that viewers most love to see in action, especially in his battles with Ah Sahm (emphasis on the plural).

Mai Ling has a hidden connection to Ah Sahms past

Despite the relative brevity of his role, Dustin Nguyen is also a splendid addition to the show, and aside from his performance in the action scenes, the sinister, shadowy manner in which he phases into and out of every scene feels like he’s being built up as a more prominent foe for the future.

Where “Warrior” really gets creative, however, is in the different scenarios it cooks up to challenge Ah Sahm with. Whether he’s a coolie, a Hop Wei enforcer, an immigrant just off the boat, a wandering stranger just trying to get a drink at a saloon, or battling in a ring of fire, nearly every episode saddles Ah Sahm with a new set of circumstances to wrestle with on top of whatever set of opponents he finds himself facing.

With the show constantly calling upon our hero to adapt to a new set of circumstances, whether in life or in combat, the essence of what Bruce intended for “Warrior” really has survived for forty-six years to finally make an impact on television screens. Not a bad way to finally escape development hell! 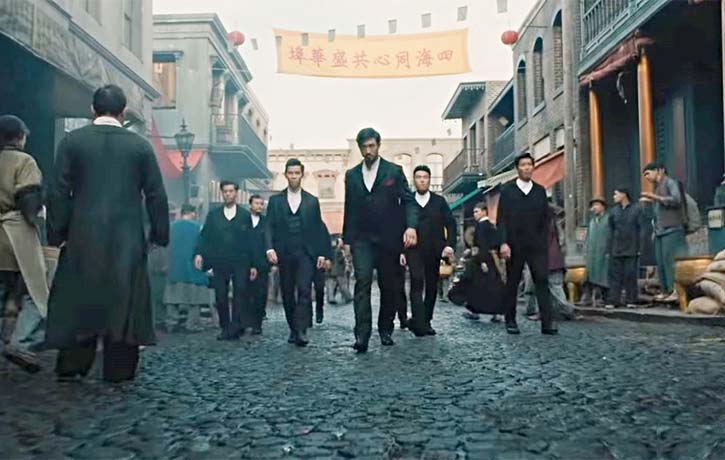 The Hop Wei are ready for gang war

Ah Sahm about to ride off into the sunset

Big Bill OHara fears hes made a a major mistake

It may have taken nearly five decades for “Warrior” to finally be realized, but it was well worth the wait. Andrew Koji is more than up to the task of carrying the series on his shoulders as its calm-yet-determined hero, the sets and costuming are on par with any big-screen period piece, the fight sequences get more outstanding with each passing episode, and Joe Taslim is quite literally, a killer villain. In the endlessly fascinating arena of posthumously published material, “Warrior” earns its place at the table and does its creator proud.

Have you seen “Warrior”? What are your thoughts on the show’s high-impact martial arts action in a Western setting? Season 2 is around the corner, what cultural and kung fu challenges do you think Ah Sahm will wrestle with next? Let us know in the comments below; Like, share and join in the conversation on Facebook and follow us on Twitter & Instagram. WARRIOR, walk on…straight into the Funiverse…and check out our interview with Bruce Lee’s daughter Shannon, these Top 10’s, get your own cool KFK merch, and subscribe for more videos via YouTube!