Triple Threat: Behind the Scenes — Interview with Michael Jai White

For fans of massive fight action, Michael Jai White’s reputation more than precedes him. Over the course of nearly three decades, he’s done everything from battling the forces of hell in 1997’s “Spawn” to putting a stop to RichardNixon’s sinister machinations in the Blaxploitation send up, “Black Dynamite”. Never one to just leave it at that, he’s also gone head-to-head with The Most Complete Fighter in the World in Undisputed 2: Last Man Standing”, along with stepping into the director’s chair with 2011’s “Never Back Down 2: The Beatdown” and its sequel, “Never Back Down: No Surrender”, and making unforgettable appearances on the CW’s “Arrow” and 2008’s “The Dark Knight”.

Always a powerful screen presence, Mike’s left his mark on popular culture with the kind of discipline and drive that are a natural byproduct of his decades ‘of experience as a dedicated martial artist. One of Mike’s latest projects is his contribution to the explosive martial arts action ensemble, “Triple Threat” –  which unites a veritable dream team of martial arts royalty, including Tony Jaa, Iko Uwais, Tiger Chen, Scott Adkins Celina Jade, Michael Bisping, Jeeja Yanin, and Ron Smoorenburg!

Today, Mike sits down with KFK to share a behind the scenes look at the making of “Triple Threat”, and the genesis of how he joined the film’s illustrious ensemble, along with offering a glimpse at some other exciting projects he has coming up this year.

Hi Brad, I’m doing great, thanks for having me back today.

Terrific. Okay, well let’s go ahead and dive into how you first became involved with “Triple Threat”? What can you share about making the film alongside its massive cast of action stars, including Tony Jaa, Iko Uwais, Tiger Chen, Scott Adkins Celina Jade, Michael Bisping, and Jeeja Yanin, along with director Jesse Johnson, and action director Tim Man?

Well, I’d been told about “Triple Threat” even before the script was done, and I could see that the cast was going to be this big martial arts ensemble, so I was already all in at that point. I’d already worked with Tony Jaa and Scott Adkins a number of times before, but obviously, “Triple Threat” had a whole lot of other players on board, as well, so I was really looking forward to being a part of it right from the start. I’d met Iko Uwais before, and I’d always wanted to work with him specifically, so this was finally our big chance. I’d also worked with Jesse and Tim before, as well, so we had a great rapport going into “Triple Threat”.

Great to hear. So, what were some of the most memorable experiences from the making of “Triple Threat”?

I think for me, the most interesting aspect of “Triple Threat” was the movie underneath the movie. The whole cast was a bunch of martial arts nerds from all over the world, being brought together, almost like we were the X-Men, and it was just something that we really hadn’t seen done before. So there was a real sense of camaraderie among the entire cast, and we all had an amazing amount of fun making the film.

No doubt. On that note, were there any injuries or mishaps during the making of “Triple Threat”?

Nothing major, although Michael Bisping was still recuperating from a knee injury when we started the film. He was still kind of in rehab as we were getting underway, but it didn’t really slow him down.

Tough trooper. Looking ahead now, what can you share about filming your fight sequence with Iko Uwais of “The Raid” fame?

It was fun doing a fight sequence with Iko for the first time, but it was also something I had to adapt to. Since Iko is so much smaller than me, I had to adjust how I would throw kicks, in particular. If I’m kicking to his head, it’s going to be at a lower height than I’m usually kicking. Meanwhile, he was always jumping and kicking higher than usual for himself, so in a way, I was a little envious of that (both laugh). But it was still fun to put our fight sequence together.

It certainly turned out impressively. So, how would you say making “Triple Threat” compared to another recent ensemble you were a part of, “Accident Man”? 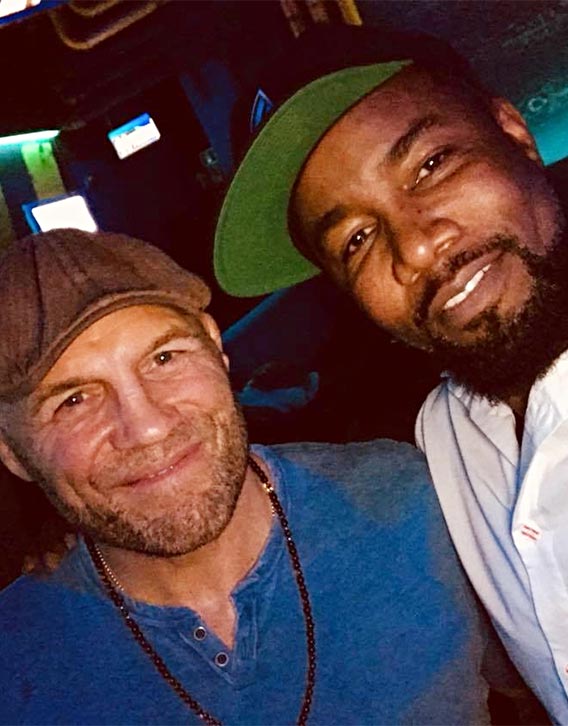 Mike with Mel Gibson Dragged Across Concrete film coming up

Well, every movie has its own set of circumstances, but “Triple Threat” just had a great team of people to be involved with. With something like “Accident Man”, it’s a lot more comedic and farcical than “Triple Threat”, which is a lot more straight ahead and amped up in its tone. And, doing a movie in the jungles of Thailand obviously is a whole different experience than cold England (laughs).

Speaking of that, what were some of the challenges that came with filming “Triple Threat” in Thailand?

For me, my biggest concern was just not getting bitten by anything, especially in the opening sequence. The production had two teams of paramedics standing by, one in yellow outfits and one in orange outfits, and that kind of made me worry a bit about what their specialities were! (both laugh) But they were on standby the whole time, so I would kind of watch whatever they were watching, and most of the time, they were looking down at the ground. That led me to think they were bug people and snake people, but nobody said exactly what they were, so that really kept me on my toes about not stepping on anything that might bite back.

That’d keep anyone super alert. What other projects do you have in the works following the release of “Triple Threat”?

The next movie I have releasing is “Dragged Across Concrete” with Mel Gibson and Vince Vaughn. It’s a very unique, dark, and comedic thriller, and it’s actually being released around the same time as “Triple Threat”. I actually have four other movies being released in 2019 after those, so it’s quite a big year for me.

Mike and crew are ready to rock

Well, we definitely look forward to seeing those. Thank you so much for the chance to speak again today, Mike. We wish you continued success with “Triple Threat” and look forward to checking out all your other releases for 2019!

“Triple Threat” is currently available on Video on Demand platforms in North America from Well Go USA, and releases in international markets soon! Are you Trippin’ in anticipation to see the huge ensemble that makes up “Triple Threat” come together? What is your favourite Michael Jai White fight scene from amongst all his movies? Let us know in the comments below; Like, share and join in the conversation on Facebook and follow us on Twitter & Instagram. Want more DYNO-MITE? Then check out KFK’s FUniverse of official gear Top 10’s, giveaways and subscribe to our YouTube channel for videos too!