Put James Bond and Jackie Chan in a blender, and you get 2002’s “The Tuxedo” – but that’s not what we’re here to discuss today! No, we’re here for another blend of 007’s tech-savvy spy adventures with Jackie’s patented cocktail of comedy and kung fu, Jingle Ma’s “Tokyo Raiders”. Though hobbled by an unnecessarily convoluted plot, the film mostly compensates for that shortcoming with a charismatic performance by leading man Tony Leung and a plentiful supply of martial arts action enveloped in equally plentiful comic relief.

Tony Leung gives an enlivening performance as Lin, a 007-esque Chinese superspy, with a trio of Japanese karate assistants, played by Kumiko Endo, Maju Ozawa, and Yuko Moriyama, always by his side. Kelly Chen portrays the lovelorn Macy, who ventures to Tokyo to locate her wayward fiancee Takahashi, played by Toru Nakamura, while the pair’s interior designer Pat Tai-yung, played by Ekin Cheng, tags along to collect his overdue payment. Hiroshi Abe also appears as the villainous crime boss Ito Takeshi, while Cecilia Cheung rounds out the cast as another of Lin’s associates, Saori.

After her fiancee Takahashi leaves her standing at the alter of their Las Vegas wedding, Macy returns to the couple’s home in Hong Kong, only to be confronted by her beau’s interior designer, Pat Tai-yung, determined to collect his fee after his payment bounced. Macy and Tai-yung travel to Takahashi’s second home in his native Tokyo, only to be confronted by a cabal of gangsters also trying to locate him. After Tai-yung fights off their attackers, he and Macy are rescued by a young woman in the employ of Lin, a private investigator also hot on Takahashi’s tail for his connection to some illicit activities in the Japanese underworld. She believes that Macy may be the key to locating a microchip her fiancee stashed away before going on the lam. 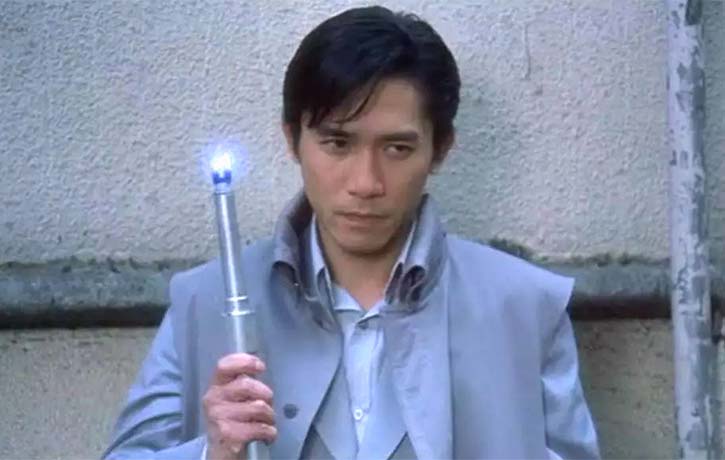 Lin keeps a shocking tool by his side

That last part is where the 007 influences come in for our hero Lin, a Hong Kong native with a trio of lovely female assistants at his beck and call when his operations take him to Tokyo (or elsewhere, as seen in the film’s 2005 sequel “Seoul Raiders”).

Tony Leung gives the film’s most standout performance as the consistently cool and assured Lin, and while Ekin Cheng makes a decent partner for him to riff off of. His character is far more entertaining in the English-dub, which is the rare case where a dub is arguably preferable to seeing the film subtitled. One scene in the English-dub sees Tai-yung (named “John” therein) attempt to communicate with one of Lin’s Japanese assistants by shouting “Haiku! Sushi! Much Kunichiwa! Tsunami!”. Tai-yung perhaps doesn’t quite channel the Jackie-Chan-Chris Tucker level of culture shock, but the English dub certainly brings him a heck of a lot closer to it, and gives the film a whole new layer of entertainment value, as only a goofy English-dub can!

Lin may have a bit of a problem

When it comes to the action, “Tokyo Raiders” isn’t the most Earth-shattering martial arts comedy you’ll ever see, but it gets the job done admirably with Jackie Chan influences as strong as those from James Bond. Lin has a particularly nice trick up his sleeve in the form of an extendable stun gun, which gives way to one of the film’s funniest gags when he encounters an enemy from an earlier encounter who mistakenly thinks he knows how to counter it.

Most of the fight sequences stay in the line with the overall goofy tone of the film, including Tai-yung’s one man battle against the gang in Takahashi’s apartment or his defense of a heavily sedated Macy from one particular heavy hitter. He and Lin also get to go at it when it becomes clear that Tai-yung has his own set of secrets he’s kept under wraps.

While the finale, involving a chase and fight aboard a power boat, doesn’t quite have the necessary zip to stick the landing, the film does offer up a minor twist in its final moments that’ll get enough of a chuckle to compensate for that and bring a genuine smile to your face.

Lin discovers that Tai yung is more than he seems

Saori is one of Lins Japanese associates

Lin is a master of disguise

Macy is left heartbroken at the altar

As an attempt to merge Jackie Chan’s blend of action and comedy with a James Bond spy thriller, “Tokyo Raiders” works pretty well. Tony Leung is charismatic as ever, the fight sequences are thrilling and comedic in equal measure, and the film overall carries a modest charm about it, elevating it nicely. The English-dub is preferable if you’re going down the subtitle route for the fun, little campy dose it injects into the film – and anyone who’s ever heard me talk about the notoriously dreadful English dub for “Black Mask” knows how rarely I dish out THAT kind of praise!

Tai yung in a tight spot

Macy is determined to bring her fiancee home

Lin has finally cracked the code

Seen “Tokyo Raiders”, what was your favourite action or fight scene?
Excited to see Tony Leung as Superspy guy, Lin, again in the newly released third film in the series, “Europe Raiders“? Let us know in the comments below; Like, share and join in the conversation on Facebook and follow us on Twitter & Instagram. (Raid this link for access to the FUniversity!)