Back in October 2016, pop music legend Madonna, posted video footage on Instagram of Hollywood star, actor and producer, Idris Elba fighting in a professional kickboxing bout at the famous York Hall in Bethnal Green, London. The “Luther” and “Thor” star had been quietly preparing to go from amateur to his first professional fight in just twelve months. “It has been a lifelong ambition of mine to fight professionally. Entering the ring to further test myself as a human being is a challenge I have been looking to take on for quite some time.” – Idris Elba

Elba was inspired by his best friend and Luther co-star, Warren Brown, a former two-times World Thai Boxing champion, to challenge himself to confront and overcome the extreme physical and psychological tests it takes to be a fighter.

Shown over three episodes, Double K Gym’s trainer to the champions, Kieran Keddle takes Idris under his wing. In the first episode, Kieran tests Idris to see if it is physically feasible for a man in his forties with a hectic acting career to meet the requirements of fighting professionally. The drama is immediate with Idris having to undergo an operation on his back. Thankfully, the procedure is a success, and training can commence properly. Kieran takes his new protégé to Japan to be drilled in iron body conditioning by Okinawan karate master Shinjo Sensei, where he also receives expert advice from Japanese K1 kickboxing legend Masato. 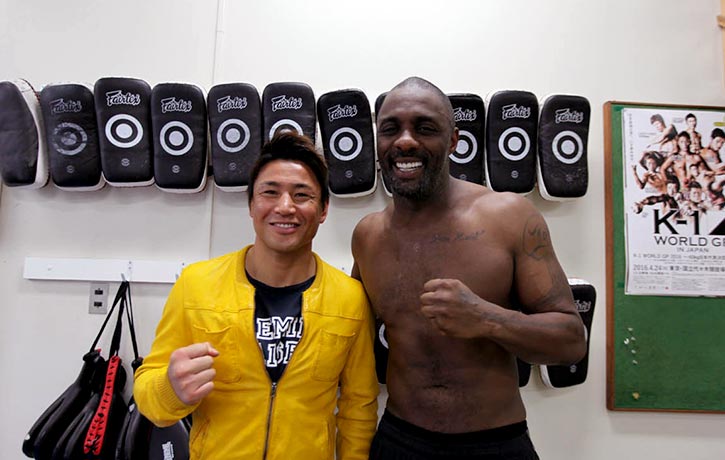 There is no holding back just because Idris is a Hollywood star – he really does go through the genuine pain and suffering that many serious martial artists expose themselves to as part of their conditioning. The final test Kieran wants to see Idris pass before he puts his reputation on the line is how he copes with a heavyweight sparring session. Initially, it doesn’t look good as Idris is easily out-manoeuvred and tagged. But this only serves to make Idris dig deep, and he strikes back with good, clean shots of his own. For the first-time Kieran sees a glimpse of the fighter in Idris and believes the challenge could just possibly be met.

Highlights of Episode One: Pain and Fear (Contains strong language)

The second episode steps up the training to a more professional level. Idris struggles with the required regime due to his filming commitments and describes candidly the impact it is having on his family. Whilst making a movie in South Africa, he tries to overcome his fighting weaknesses by training with legendary fighting coach Steve Kalakoda and taking on Francois Botha. Botha is a former boxer who has been in the ring with Mike Tyson, Lennox Lewis, Wladimir Klitschko and Evander Holyfield.

Kalakoda is quick to spot some shortcomings in Elba’s boxing technique. Alongside some gruelling toughening exercises, Kalakoda begins to make Idris more efficient with his punching power. A major part of ring craft is movement, something that Kieran recognises Idris is seriously lacking. He decides to take Idris to the home of some of the best boxing talents in the world – Cuba. Idris spars with Cuban boxing champion and Olympic silver medallist Emilio Correa. He is barely able to land a glove on his opponent, as Emilio dances around the ring.

With the days counting down to Elba’s first amateur bout, Kieran pushes him to the extremes of exhaustion in the punishing 40-degree heat of Havana. Looking more like the finished article, Idris returns to London to face amateur champion Patric Halforty at London’s Repton Boxing Club. Starting brightly Elba was on the front foot dominating the first round. However, the limitations of his fitness were exposed, as his energy was sapped in the second and third rounds, resulting in taking an eight-count. As he has done so many times throughout the series, Elba digs deep into his lion’s heart, and manages to complete his bout.

This series has been equally gripping and inspirational in its no-holds-barred coverage. Idris Elba has no need to demonstrate his impressive acting skills here as all the drama unfolds for real in each episode. He is given no special treatment in his training and many fighters will recognise the highs and lows this movie star goes through in preparation for his fight.

There were times when Idris questioned his commitment

Training in Cuba helps Idris with his movement

If you haven’t caught this show yet, we would urge you to seek out the first two episodes on catch-up. Don’t miss the enthralling final episode featuring the main event itself on the Discovery UK channel, today, Tuesday 31st January 2017 at 10pm!

Preparing in Tokyo for Heavyweight sparring with Nori