After a fantastic first season, “The Legend of Korra” returns for the second book of its four part saga, and continues to match the greatness of its predecessor series “Avatar: The Last Airbender”. The stunning animation, masterful storytelling, and incredible bending action is all in top form here, but easily the best new addition to the mythos of the series comes in the form of something that die-hard fans, the casually curious, and everyone in between have waited years to see – the story of the first Avatar!

All of the primary cast members of Book One return for Book Two, and as with “Avatar”, the show just wouldn’t be the same without them. Janet Varney returns to voice the heroine Korra, while J.K. Simmons reprises his role of her Airbending mentor Tenzin (along with, in the tradition of his signature role of J. Jonah Jameson in the original “Spider-Man” trilogy, continuing to really, REALLY look like his character). David Faustino, P.J. Byrne, and Seychelle Gabriel are back as Korra’s allies in the new Team Avatar, Mako, Bolin, and Asami, while Kiernan Shipka, Darcy Rose Byrnes, and Logan Wells return as Tenzin’s children Jinora, Ikki, and Meelo, along with Maria Bamford again voicing their mother Pema. Korra’s ally on the Republic City Police Force, Lin Beifong is back, again voiced by Mindy Sterling, while her father and uncle, Tonraq and Unalaq, voiced James Remar and Adrian LaTourelle respectively, return as key characters in Book Two, as opposed to their minor roles in Book One.

The returning cast is also joined by a number of new characters, such as John Michael Higgins as the eccentric business tycoon Varrick, Tenzin’s Waterbending sister Kya and his wacky brother Bumi, voiced by Lisa Edelstein and Richard Riehle, Raava and Vaatu, the spirits of Light and Darkness voiced by April Stuart and Jonathan Adams. In addition, a very welcome appearance by the elderly Katara, voiced by Eva Marie Saint reprising her role from her brief appearances in Book One, and last but most certainly not least, Wan, the first Avatar himself voiced by Steven Yeun!

Six months after fighting back the Equalist Movement and its war on Republic City, Korra believes she has mastered the martial art of Airbending, and feels that her continued training under her master Tenzin is holding her back from her duties as the Avatar. Her friends, meanwhile, are adjusting to their new lives – Mako has joined the Republic City Police Force, Bolin strives to bring the Fire Ferrets back to the former pro-bending glory, and Asami struggles to save the Sato Family business Future Industries, on the verge of bankruptcy after her father’s involvement with the Equalist Movement. 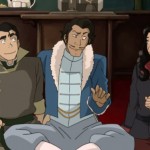 Varrick has some business advice for Asami

Tenzin has a word with his sister Kya

Team Avatar ready themselves for the mission ahead

Team Avatar arrives in the Spirit World to stop Unalaq

To take their minds off of their problems, Team Avatar and the Tenzin family travel to the Southern Water Tribe for the Glacier Spirits Festival, but things get more heated when Korra’s uncle Unalaq tries to take Korra under his wing. Despite the pleas of Tenzin and her father Tonraq that she continue her Airbending training, Korra chooses to go with Unalaq after he succeeds in fighting off dark spirits that have managed to escape from the Spirit World. Unfortunately, Korra soon discovers that Unalaq has a sinister plot that requires the help of the Avatar to set into motion. To stop him, she will have to truly master the spiritual aspects of the Avatar and take a trip down memory lane to her earliest life – Wan, the first Avatar.

“The first Avatar” – those three words alone open up an infinite number of possibilities, and “Book Two” takes full advantage of them. One must remember that “The Legend of Korra”, at its inception, was only intended to be a twelve-part mini-series, and watching Book One shows how much was poured into what the series was originally going to be. By the end of the season, it seemed as though there was no way that the series even could go on, until a cameo from Aang in spirit form swung the door wide open once again.

A battle of such proportions and emotional impact told in just twelve episodes simply demands a truly worthy follow-up – and how better than to go back to where it all started for the Avatar? In a two-part episode, aptly titled “Beginnings”, we learn that the Avatar began 10,000 years ago as a young man named Wan, banished from his homeland to live among the spirits. After interfering in a duel between Raava and Vaatu, the spirits of Light and Darkness, Wan realizes that he’s unwittingly set Vaatu on a world rampage. Together, he and Raava join forces, and by the time Vaatu is imprisoned once more, Wan is granted mastery of all the elements and bonded with Raava, allowing him to be reborn after his death to maintain balance in the world.

Meelo is ready for some adventure

Korras treacherous uncle has deceived her

Korras father and uncle has a complicated history

Just as a history lesson for the series, “Beginnings” is absolutely to die for, and the series cleverly adjusts the animation style of the episodes to differentiate it from the events of the present. Once Wan is fully realized as the Avatar, his battle with Vaatu is truly everything fans of the show have come to expect, especially with Wan’s method of using the four elements in tandem, that’s a clever visual nod to Aang’s battle plan in the final episode of “Avatar”. However, Vaatu cannot be destroyed, for there must always be balance in the universe – light and dark, good and evil, yin and yang, and every 10,000 years brings with it the Harmonic Convergence, where Raava and Vaatu must do battle for the fate of the world, leaving Korra with the task of stopping Vaatu and setting the stage for the events of the entire season. If you couldn’t already tell, the goal Book Two has in mind is be even more epic than Book One with the stakes about a million times higher, and the result is some of the most amazing action sequences “The Legend of Korra” has ever created!

In narrowing down the best episodes of the season, there’s no question that parts one and two of “Beginnings” are top contenders. However, as with the original series, there’s a generous helping of comic relief as well. Book One mostly supplied that in the form of Bolin, who continues to essentially serve the same role Sokka did in “Avatar”.   In Book Two, there’s plenty more laughter to be had thanks to Varrick, who plays a role in Unalaq’s villainous plot without truly becoming a villain. Bolin and Varrick are where most of the comedy in Book Two emerges from, such as Bolin becoming a star of Varrick’s revolutionary “movers”, and Bolin’s uneasy romance with Korra’s cousin Eska, voiced by Aubrey Plaza. Then there’s her brother Desna, voiced by Aaron Himelstein, who has a personality roughly equivalent to your average cyborg. Still, Book Two is absolutely dead set on topping the scale and magnitude of Book One, and not only does it raise the stakes to the absolute highest summit they could possibly reach, but gives us another “Avatar”. First by taking its two main villains and quite literally merging them – Unalaq and Vaatu, joined together to become UnaVaatu, the Dark Avatar.

If “The First Avatar” sounded too good to be true, “Avatar vs Avatar” sounds like the battle of the century, and sure enough, Korra’s battle against the Dark Avatar takes the series into “Pacific Rim” territory – two colossal giants, each master of the elements, battling for the fate of the world. The duel of the Avatars spans the final three episodes of the season, “Harmonic Convergence”, “Darkness Falls”, and “Light in the Dark”, and all three sit right next to “Beginnings” among the best of Book Two.

Battle of the Avatars

Talking about Book Two of “The Legend of Korra” feels like listing off a series of pitches that surely must have gone down in crafting the season – “Bring in the first Avatar!”, “Pit one Avatar against another!” Indeed, that’s exactly as it should be! Book Two is a series of firsts for the “Avatar” franchise, all of those things that every fan of the series has ever dreamed of seeing on the show, finally brought to life at last. Getting the fans also pumped for the next season is what “Avatar” does best, and that’s exactly the way to feel at the end of Book Two. Stay Tuned for “Book Three – Change”, coming up next!

The Legend of Korra - Book One: Air