Home » Reviews » Movies » The Legend of Korra – Book One: Air

The Legend of Korra – Book One: Air

The legacy of the Avatar continues in “The Legend of Korra”. The sequel to Nickelodeon’s hit animated series “Avatar: The Last Airbender”, the titular Avatar returns in the form of the headstrong Waterbender Korra. First arriving on Nickelodeon on 14th April, 2012, the series is just now concluding its fourth and final “Book”, as the series likes to call them.

Fans know not to take this for granted, however, since “The Legend of Korra” as we know it almost didn’t happen! Originally conceived as a twelve episode mini-series, its scope was later expanded to fifty-two episodes spread over four seasons. Still, one can see the amount of energy that was poured into the original concept of the show in its first season – if these twelve episodes were all the world got of “The Legend of Korra”, even the most cynical of fans would be hard-pressed to feel unsatisfied by the season’s conclusion!

Janet Varney leads the way as the voice of Korra, the newest incarnation of the Avatar. Her character’s assertive, confident, and at times slightly bull-headed personality is fully enlivened by Varney’s voice acting, but the supporting cast is equally strong, lead by J.K. Simmons as the voice of Korra’s Airbending mentor Tenzin. She also has a few additional allies in the form of Tenzin’s wife Pema, voiced by Maria Bamford, and his three Airbending children, Jinora, Ikki, and Meelo, voiced by Kiernan Shipka, Darcy Rose Byrnes, and Logan Wells. David Faustino voices Korra’s close friend and love interest, the Firebender Mako, while his Earthbending brother Bolin, voiced by P.J. Byrne, brings fantastic comic relief to the show. Asami Sato, voiced by Seychelle Gabriel, rounds out the new Team Avatar with her technological skills and business savvy. Korra also finds herself initially butting heads with police chief Lin Beifong, the Metalbending daughter of Toph Beifong voiced by Mindy Sterling. Her first true test as the Avatar, comes in the form of conniving politician Tarrlok, voiced by Dee Bradley Baker, and even more so from Amon, the villainous leader of the Equalist movement voiced by Steve Blum.

Seventy years ago Aang, the last of the Air Nomads, defeated Fire Lord Ozai and realized his destiny as the “Avatar” – the spirit of light tasked with maintaining balance in the world, and the only person capable of mastering all of the elements. The Hundred Year’s War now at an end, the Four Nations co-exist and prosper together. With his wife, the Waterbender Katara, Aang fathered three children, bringing new Airbenders into the world. Now, Aang’s youngest son Tenzin, will carry on his late father’s legacy as the Airbending teacher for the new Avatar, a seventeen year-old Waterbender named Korra.

Korra joins him in Republic City, the capital of the United Republic of Nations founded by Aang and the new Fire Lord Zuko after the Hundred Year’s War, to commence her Airbending training. Korra also has a great love of the sport of pro-bending, and after sneaking away from her studies at Air Temple Island one night, manages to become the newest member of Republic City’s pro-bending team, the Fire Ferrets. There she bonds with two brothers on the team, Mako and Bolin. Korra ends up taking a very strong liking to Mako, but she faces competition in the form of Asami Sato. However, pro-bending matches and blossoming romances become an increasingly lower priority for Korra with the rise of the Equalist movement, composed of people born without bending abilities. As Korra and Mako discover, the Equalist Movement’s mysterious leader Amon has power to permanently strip people of the ability to bend, and is planning to launch a war on Republic City.

The Equalist Movement plots their attack on Republic City

The Equalist Movement is gaining traction

Pro bending makes use of all the elements

In crafting the new Avatar, series’ creators Bryan Konietzko and Michael Dante DiMartino intended for their heroine to be the complete inverse of Aang – while the latter quickly masters the spiritual aspects of being the Avatar. Whilst requiring more intensive training for the physical side, Korra is able to master the physical elements swiftly while the spiritual side proves the most challenging for her. In her very first appearance in the show’s pilot episode, “Welcome to Republic City”, that aim is accomplished like a slam dunk when the four-year old Korra proudly proclaims, “I’m the Avatar! You gotta deal with it!” while effortlessly bending earth, fire, and water before a group of Southern Water Tribe elders.

In the context of the mythos of the series, this is particularly important, given that the Avatar is typically not made aware of who he or she is until their sixteenth birthday. In just the opening scene, “The Legend of Korra” shows fans that it will be far more than a mere rehash of its predecessor – the adventures of the new Avatar will follow a very different path, one that will chart its own unique trajectory but being always careful to retain the, well, elements (insert Dr. Evil pinky grin here!) that made its predecessor a consistently amazing and unforgettable saga.

The animal population of the show exemplifies this, as well– the new spirit animal of the Avatar is a “polar bear dog” named Naga that Korra rides like a mighty stallion, but fans still want to see a flying bison, and they get one named Oogie flown by Tenzin and his family. However, the setting is what really gives the show an identity all its own. While the time frame of “Avatar” is one that most viewers would peg at somewhere around the 18th or 19th century, “Korra” updates its time frame to evoke the Roaring Twenties. It models the location of Republic City to resemble, in words of the show’s creators, “if Mahattan had happened in Asia”, complete with a Statue of Liberty in Aang’s likeness!

Korra is not amused 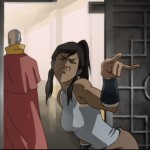 Korra has her eye right back on the chief

One of the most welcome additions to the series, one that leads to some of the best bending action, is the sport of “pro-bending”. With three members to a team seated atop of a lei tai platform, the goal is to gain as much territory as possible or knock the opposing team off the platform into the pool below. Although Korra is enthralled by the sport, Tenzin initially disapproves of her competing, seeing as a distraction from her training. However, in the episode “A Leaf in the Wind”, Tenzin sees that Korra’s experiences in pro-bending have greatly improved her Airbending abilities which she had been struggling with, and agrees to let her remain on the team. The major overarching conflict of Book One comes in the form of Amon and the Equalist Movement, who quickly graduate from a simple protest to an all-out terrorist group with their mission to rid the world of all the bending arts.

The issue of people lacking bending abilities was touched upon in “Avatar” with the episode “Sokka’s Master”, and chi-blockers were also introduced in the original show. They had always only been capable of temporarily deactivating the skills of a bender, unlike Amon who sets about depowering those capable of bending at an alarming rate. The exclusion and envy that anyone would feel, lacking the kind of power masters of the bending arts possess, makes this arguably the most emotional season either series has ever produced. In addition, the constant challenges that Korra and her allies are put up against by the Equalist Movement are as devious and cruel as the Joker’s reign of terror in “The Dark Knight”. Amon’s mission is given some background in the second half of the season, which also leads to some very welcome cameos of the young-adult versions of Aang, Katara, Sokka, Toph, and Zuko, and by the final third of the season, it’s an all-out-war in Republic City that sees casualties on both sides. This leads to, by far the best, and certainly most unexpected, money shot when Korra finally unlocks the secret of Airbending.

If “The Legend of Korra” had only consisted of these twelve episodes, “Avatar” fans would still have had their loyalty to the series rewarded. It’s similar to “Avatar” in all the ways it needs to be, and distances itself from its predecessor in all the ways it must in order to have an identity of its own. Even better, the love triangle that develops between Korra, Mako, and Asami thankfully doesn’t stoop to the tired trope of demonizing the latter. The bending action is as great as ever, the sport of pro-bending is a fantastic addition, and the overall animation is arguably a step up from the gorgeously animated “Avatar”. Nevertheless, fans of the series can rest easy knowing that while it may have been conceived as just twelve episodes, “The Legend of Korra” has only just begun. “Book Two – Spirits” is coming up next!

Korra assumes the mantle of the Avatar from Aang

Im the Avatar You gotta deal with it