With the popularity of big names in the fighting game genre such as “Street Fighter”, “Tekken” and “Mortal Kombat” among Western fans, it could be easy to overlook the “King of Fighters” (or KOF) series.

Developed by Japanese video game company, SNK, the fun, fast-paced, team-based 2D fighting game franchise returned to the fighting game scene with its latest installment “The King of Fighters XIV”, which was released two years ago a few months after “Street Fighter V”. Taking place after the Ash Crimson Saga, KOF XIV introduces new bosses Antonov, a Russian billionaire who has acquired the rights to the KOF tournament, and Verse, the game’s antagonist. In addition, the game presents new protagonist, Shun’ei, a student of Tung Fu Rue who happens to be associated with Verse and shares some of Verse’s powers.

Joe Higashi chops down the tree

“The King of Fighters XIV” has brought some major changes to the franchise. First and foremost, much like “Street Fighter IV”, this one makes the move towards 2.5D territory with its use of 3D stages.

Several characters such as Kyo Kusanagi, Joe Higashi and Iori Yagami don new outfits and/or are voiced by new voice actors. Despite these changes, however, KOF XIV manages to revert the series back to it origins by bringing back some old faces such as the Fatal Fury antagonist Geese Howard, Geese’s son and Garou: Mark of the Wolves protagonist Rock Howard, Terry Bogard and Geese Howard’s mentor Tung Fu Rue, the psychopathic Ryuji Yamazaki and Terry’s love interest Blue Mary.

Gameplay-wise, KOF XIV replaces EX special moves with Max Mode, which allows characters to perform EX-like moves until the Maximum meter runs out. In addition, the game features a new Time Attack mode, in which players select a character to fight through 10 different opponents in the shortest time frame.

Kim goes for a final blow

Joe Higashi finishes the fight with a Slash Kick

Kyo Kusanagi finishes the match with a solid kick

Last, but not least, KOF XIV has taken a beginner-friendly approach such that players can perform rush combos, which end with a special move or super move, by just repeatedly pressing the light punch button. In my opinion, this is an excellent option for those who want to pick up KOF from scratch and fairly quickly become familiar with the game.

Each character has his or her own fighting style, from mainstream martial arts styles like Taekwondo, Karate or Muay Thai to fictionalized disciplines. As heir to the Kusanagi clan, Kyo Kusanagi uses a mixture of Chinese Kenpo and Kusanagi-style martial arts.

Despite being a singer Athena Asamiya is a warrior of justice

Kyos flames burn brighter than ever

The rivalry between Kyo and Iori is as heated as ever

Similarly, Kyo’s rival Iori Yagami, who has finally retained his Power of Flames, employs the fictionalized Yasakani-style martial arts, which puts an emphasis on claw-like attacks in addition to purple flames.

The other flame-wielding character of the game, K’, has his style labelled as “Pure Violence”. However, he does employ some Jeet Kune Do techniques such as the One-Inch Punch (as does his partner-in-crime Kula Diamond) and flying kick.

Then we have characters who use a personalized variation of traditional martial arts. For instance, the Art of Fighting team, consisting of Ryo Sakazaki, Robert Garcia and Yuri Sakazaki practice Kyokugenryu Karate, which involves fast and hard attacks, based on Kyokushin Karate. Mai Shiranui, one of KOF’s most well-known female characters, adopts Shiranui-ryū ninjutsu.

K subdues his opponent with a one inch punch

On the other half of the KOF XIV roster are our straight-up traditional martial artists that includes the likes of characters such as Kim Kaphwan and Joe Higashi. As the franchise’s staple Korean character, Kim Kaphwan is the epitome of a pure Taekwondo practitioner. Not only is he a champion of justice, but also his arsenal is 95% kicks and contains every kick in the Taekwondo kicktionary alongside Kim’s signature, acrobatic-like moves such as the Hangetsu Zan and Hien Zan (aka the bottle/flask kick).

As a Muay Thai champion, Joe Higashi is arguably SNK’s most recognizable Muay Thai character, and Joe’s style stays true to the Thai martial arts. For the most part, Joe Higashi uses basic punches, kicks, knees and elbows that are essential to Muay Thai, although Joe has some signature moves that are more reflective of other striking arts like Taekwondo and Karate. A good example of this would be Joe’s Slash Kick, which is based on the spinning back/side kick.

Kyo Kusanagi’s teammate, Goro Daimon is primarily a judo practitioner, as the majority of his move-set consists of throws, although Goro does use some striking techniques. SNK’s iconic American character, Terry Bogard, simply has his style classified as “Martial Arts”, but his style consists of techniques from a variety of disciplines including boxing, karate and kickboxing.

Master and student duke it out

This old mans still got some tricks up his sleeve

This is one intense fight between Kyo and Iori

As Meitenkun is asleep or sleepy half the time, this style allows Meitenkun to conceal his power and equips him with some explosive techniques, giving the character a rather erratic fighting style rather like drunken fist.

Aside from Shun’ei and his team, Nelson of the South American team uses boxing. His style is more technical like Dudley from “Street Fighter” and Steve Fox from “Tekken”. In fact, some of his moves are similar to that of Steve Fox.

For instance, like the British boxing champion, Nelson has a command to move in on his opponent with his footwork, and his grappling move, the Belly Crusher, will remind “Tekken” fans of Steve’s Sonic Fang technique. Although Nelson has very few special moves as compared to other characters, he relies more on hard-hitting combos.

Terry Bogard is about to deliver a mean punch

Nelson’s teammate Zarina does Capoeira, although her style is officially identified “Kicking techniques”. Kim Kaphwan’s new teammates, Gang-il and Luong, also use Taekwondo. As Kim’s master, Gang-il shares some of Kim’s special moves, which are slower but more powerful compared to Kim’s. This could even be hinted at due to Gang-il’s beefy frame. Luong, who serves as Gang-il’s companion, resembles Juri from “Street Fighter” in terms of looks, personality, costume color-scheme and moveset.

“King of Fighters XIV” was released around the same time of a then-beta-version, like “Street Fighter V”, which offered very few characters and game modes back then. With fighting game fans dissatisfied at the highly anticipated “Street Fighter V” at the time, they were able to relieve their disappointment with KOF XIV, as the team-based fighting game provided much more than what the franchise was normally expected to offer. 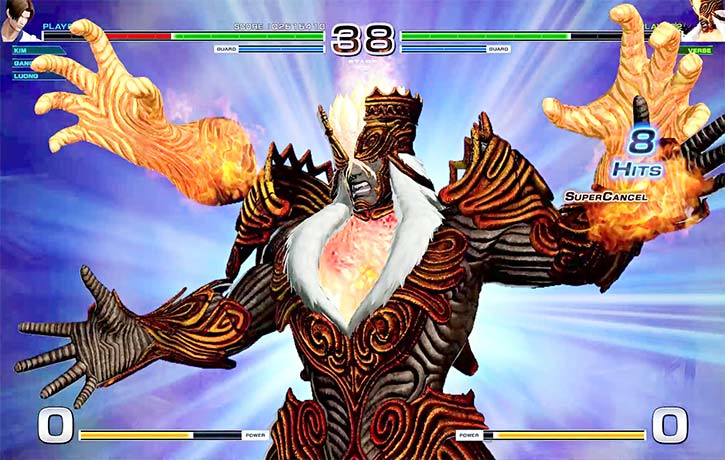 The final boss Verse has an intimidating presence

The Bogard brothers have quite the rivalry between each other

ShunEi knocks out Verse with a spinning hook kick 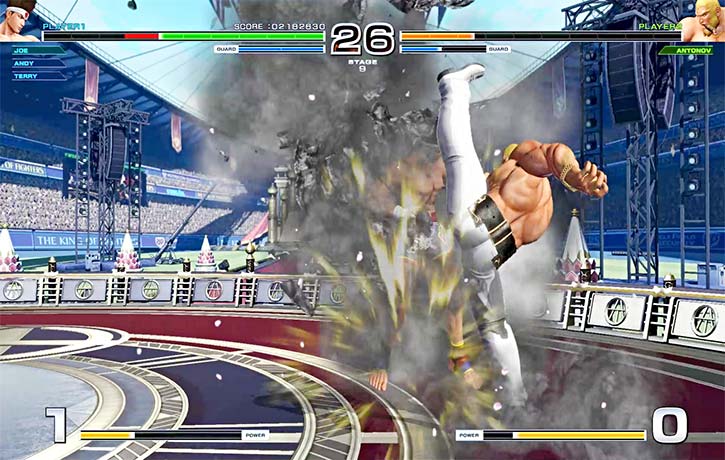 The tournament host Antonov is a formidable foe

“King of Fighters XIV” has arguably the largest roster of all the KOF games and has brought back some popular characters and introduced some new and interesting faces. Furthermore, the move to 3D models and environments as well as the beginner-friendly ‘Rush combo’ feature represented a huge leap forward for the KOF series. Why the 2016 Game Awards chose “Street Fighter V” over KOF XIV, as the Best Fighting Game, I really don’t know!

Benimaru Nikaido adds some shock to his punches

K starts the fight with a flying kick

Kim throws his kicks with authority

Zarina is a master of Capoeira

Mai Shiranui throws down with the big boys

Verse about to deliver a devastating blow

ShunEi possesses some of Verses powers

Mai Shiranui uses a fan as her weapon of choice

Are you a fan of “The King of Fighters” franchise – what did you think of XIV? Among the vast roster of characters to choose from, who’s your favourite and what martial arts style do you resonate with the most? Let us know in the comments below and join in the conversation on Facebook, Twitter and Instagram!

Whether you’re a warrior-in-games or in the chess- game-of-life, ENTER THE FUNIVERSE and UP YOUR CHI-FORCE, check out these other games, interviews, Official KFK wear, and subscribe to us on YouTube for more Mortal Martial Mayhem!