Thoughtful tale of the last surviving Wing Chun master’s quest to pass down his art in pre-Second World War China. The film stars Liao Fan, Jiang Wenli, Chin Shi-Chieh, Song Jia and Song Yang. “The Final Master” is directed by Xu Haofeng, writer of Wong Kar Wai’s “The Grandmaster” and is adapted from his own novel.

A Tianjin native, actress Jiang Wenli stars as “Madame Zou”, a Machiavellian martial arts master. She made her movie debut in the critically acclaimed “Farewell My Concubine”.

Prolific actor Chin Shi-Chieh appears as “Zheng Shan’ao”, the Grandmaster of the Tianjin martial art community. In a career spanning forty years, Chin has appeared in movies such as “Reign of Assassins”, “The Guillotines”, “The Grandmaster”, and both Brotherhood of Blades films.

Song Jia plays Chen’s wife “Zhao Guohui”, who lives under a cloud due to a past indiscretion. She has appeared in the movies “Red Cliff”, “Bruce Lee – My Brother”, and guest starred in Sammo Hung‘s “The Bodyguard”. 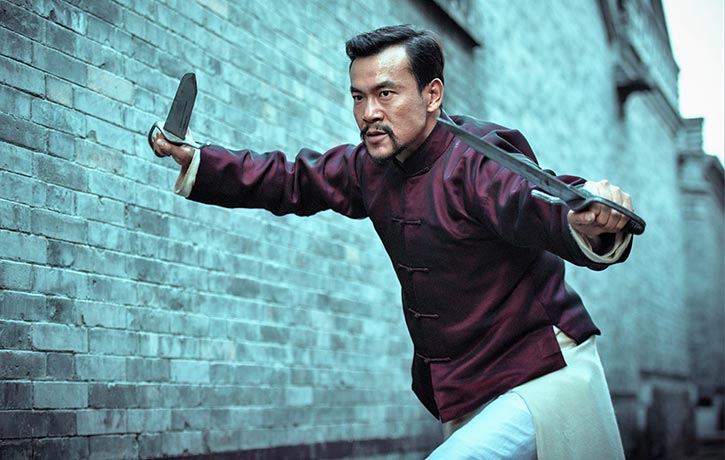 Some of the finest Wing Chun weapons choreography committed to film

Chen takes Geng on as his apprentice

In 1930’s China, unrest rules the nation. Chen Shi is the last surviving Wing Chun master, tasked by his own master with keeping the art alive. In 1932, Chen travels to Tianjin, a northern Chinese city renowned for its martial arts culture. Chen’s plans to open a martial arts school result in him being caught in the middle of a power struggle between Madame Zou and the city’s military leaders.

The northern masters are reluctant to pass on their martial arts skills to the masses, but Chen hopes to spread his southern art extensively to ensure its survival. Chen must earn permission to open his school, by training an apprentice in his style, who must defeat eight of the nineteen established schools in Tianjin.

Aside from the ramifications of his friction with the traditions of the arts, Chen faces the societal ostracization of his wife, who gave birth to a foreign baby at a young age.

In the face of changing times and lost traditions, Chen must use his Wing Chun skills to ensure his own survival, and that of his master’s art.

Straight out of the blocks, a butterfly-sword duel in a coffee house is swiftly followed by a fight with multiple pudao wielding assailants.

Leading a simple life away from the city, Chen teaches a local hothead a lesson with some simple, but beautifully effective butterfly knife counters. Each attack is deftly countered with a potentially fatal move, should Chen wish to complete it to its lethal conclusion.

What we are witnessing in the most part is the art of Pushing Hands but with knives. It’s less about the aggressive stabbing and slashing that you might expect from a bladed weapon, and more about the intelligent use of redirection, defence and countering.

The action is not exclusively restricted to knife fighting though. Following a demonstration of some simple chin na techniques, Chen holds back a gang of thugs with a long pole whilst nonchalantly sat on a bench. During a challenge match, a girl dressed like Street Fighter’s Chun Li has an amusing fight, using her flexibility to great comic effect. In a street brawl, Chen’s apprentice Geng battles with a mix of more traditional-style chin na and Wing Chun.

For the epic final battle, Master Chen takes on challenges from all nineteen Northern-style martial artists. I imagine the northern Chinese city of Tianjin was chosen deliberately by writer Xu Haofeng to illustrate the Southern Wing Chun techniques defeating the traditionally longer weapon styles of the north. Combined with the confines of the alleyway location, the concluding battle appears to be a metaphor, for a relatively modern style of martial art overcoming the traditions of old, in the face of the westernisation of China.

There is a power struggle between Madame Zou and the military

“The Final Master” is a thoughtful martial arts film that requires the viewer’s attention. The plot follows many strands, lamenting about the loss of old traditions if they do not adapt to the times. There is also the not-always-clear Machiavellian chess playing of Madame Zou. It discusses the nature of respecting the secrets of a master’s art, and the duty of balancing that with passing on the art to ensure its survival and a master’s legacy. There is some wonderful reflective dialogue when Chen discusses the teachings of his master. I can completely relate to the weight of responsibility of passing on a master’s teaching.

Although “The Final Master” has some of the art house sensibilities of Wong Kar Wai’s “The Grandmaster”, it boasts some truly pure martial arts choreography; there is no wirework here. The action is nearly all about the butterfly knife. There aren’t many films that pay such attention to the authentic techniques of this weapon and its accompanying footwork and postures. I am sure Wing Chun fans in particular will devour each fight scene with enthusiasm. Although the pace can be a little slow in between, the frequent action scenes are well performed and filmed. Alongside Ip Man 3, it features some of the finest Wing Chun weapons choreography committed to modern film. If you enjoyed “The Grandmaster” you will love this!

Chen learns there is no such thing as a free meal

“The Final Master” releases today on Blu-ray, DVD and digital formats courtesy of Cine Asia. What are your impressions or have you already seen this movie? What’s your favourite wing chun flick? Let us know below, join in the conversation on Facebook and follow us on Twitter. (Check out our other kung fu-elled reviews too!)