Action-horror is one of the most unimpeachable, time-tested unions of genre-hybridity, with everything from zombie movies to “The Raid” serving up delicious cocktails of gore, suspense, and cutthroat action that enthusiastically lives up to its name. Still, with even such a formula being a proven recipe for success, the idea of a Korean exorcism movie with both supernatural and MMA-driven martial arts action is such a Hail Mary (no pun intended) gamble that the very idea itself can’t help but arouse curiosity.

Fortunately, “The Divine Fury” impressively brings together such diverging concepts, curdling viewers’ blood with souped-up exorcism scenes with an “Evil Dead” edge while bookending the film with exhilarating and at times, quite literally supernatural martial arts action!

MMA fighter Yong-hoo, played by Park Seo Joon, has grown hostile towards the concept of God, following a tragedy in his youth that left him an orphan. However, he begins to reconsider his antipathy towards religion after a crucifixion-type wound inexplicably appears on his hand, eventually leading him to consult with Father Ahn, played by Ahn Sung Ki, an expert in the arcane field of exorcism.

Soon, Yong-hoo’s disbelief in the divine is put to the test through his interactions with Father Ahn, and he soon discovers that the wound may foretell Yong-hoo possessing the supernatural power to battle demons.

As an action-horror movie, “The Divine Fury” decidedly places its emphasis on the latter. The bulk of the film is a dark slow-burn, with increasingly nightmarish scenes of characters major and minor being made the tools of otherworldly forces. With “The Exorcist” forever standing as the bar for the genre that is its namesake, “The Divine Fury” assaults viewers with sequences of demons and exorcisms of an exceptionally hard-core, almost heavy metal quality.

Chillin at the blues bar

So committed is “The Divine Fury” to unnerving its audience, in fact, that Bill Skarsgard’s Pennywise of the contemporary “It” movies would be right at home here. On the horror end of the action-horror union, “The Divine Fury” gets the job thoroughly done, while offering periodic sprinkles of the former before giving it a full pay-off in the final act.

It must be emphasized that “The Divine Fury” compartmentalizes its action, with Yong-hoo’s MMA career being glimpsed in the beginning in a relatively short cage bout before the movie shifts its emphasis to enemies of the spookier kind. However, rest assured, the pay off of a clerical smackdown right out of “Blade II” is well-worth it.

As cliche as it sounds to make the obligatory video game comparison, it’s not only warranted, but fully complimentary in the final, demon-swarming act of “The Divine Fury”. In keeping with its supernatural gimmick, the movie also adds a few extra layers of clerical finesse to it’s finely-tuned martial arts action. 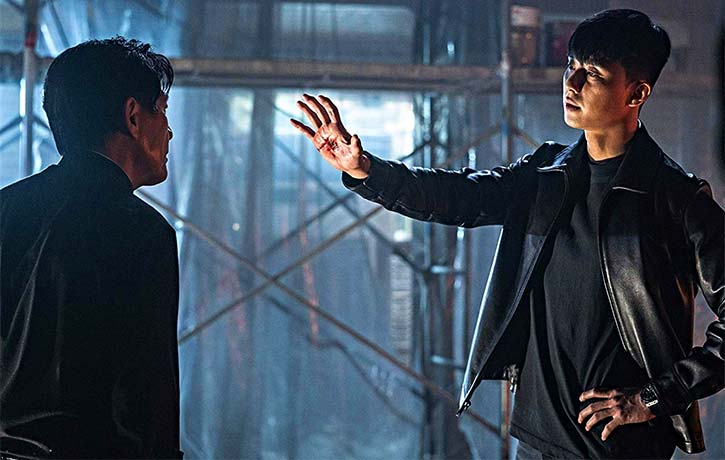 The battle rages on

There aren’t many precedents for the use of Holy Water as a tool of combat in an action scene, but “The Divine Fury” utilizes it beautifully with the heads of demons bursting into flames upon contact with our hero’s soaked palm. In an era where motion capture and CGI can create almost anything the human mind can dream up, “The Divine Fury” is very likely the only place this year where you’ll see a scaly, clawed demon in pitched battle with a holy man with a literal flaming fist. Now that’s action movie innovation!

The marriage of action and horror is as strong a genre bond as any, and “The Divine Fury” gives everything its got on both. Admittedly, the degree to which it devotes itself to scares and suspense leaves the quantity of martial arts action a little on the lighter side, but in placing its emphasis in that aspect on quality, the movie delivers some of the most memorable and unique action sequences of the year.

“The Divine Fury” bides its time, but doesn’t let you down – it’s a story of rediscovering the power of faith, wrapped up in chills and thrills – perfect for this time of the year I’d say.

Demonic forces lurk in the shadows

The power of God is a valuable assest in battle.

Father Ahn brings the power of faith to the fight

Enter the Divine gate of sweet action Fury with KFK’s movie reviews and exclusive interview, including this one with leading man Bruce Khan, on his superb Korean action fight-fest “Revenger”. Don’t forget to buy your KFK gear in time for Xmas and subscribe to our YouTube channel for more!