In this action-crime piece, a dangerous and mysterious hit man completes contract killings for the New York mafia.  Going by the name Ghost Dog, this cerebral assassin with a rocky past, lives by the samurai code, a rarity in the modern Western world.  When one of his hits goes wrong, Ghost Dog suddenly finds himself in the crosshairs of the Mafioso that once employed him, requiring the use of all his Samurai skills.

Ghost Dog is portrayed fantastically well by renowned dramatic actor Forest Whitaker. Although an action role is not one in which he would historically thrive, Whitaker’s brooding and thoughtful style helps bring believability to the character’s adherence to the samurai way.

John Tormey plays a local mobster Louie, who engages Ghost Dog to complete mob hits.  Tormey’s turn as the classic Italian gangster is apt, although not quite the caliber of Al Pacino in The Godfather, or Robert De Niro in Goodfellas.  Still, he brings a sassiness and subtle comedy to the role that we’d expect.

Isaach De Benkole is Raymond, a Haitian ice cream salesman.  Raymond provides Ghost Dog’s only friendship in the movie, and acts as somewhat of an ethical sounding board.  Whilst Raymond only speaks French and Ghost Dog English, the connection between the two is obvious and well characterized.

The firearms exchanges in Ghost Dog were high intensity

When a young Ghost Dog was accosted by a gang of youths, mobster Louie intervenes, saving Ghost Dog from certain death.  Ghost Dog, adhering strictly to the samurai code, is now indebted to Louie and becomes the local mob’s most efficient and effective hit man.

After a hit goes wrong, Ghost Dog finds himself hunted by a hoard of gun-toting gangsters intent on his destruction.  Italian mafia sweep the New York streets and rooftops in a desperate attempt to find the elusive victim.  Unfortunately for the mafia goons, Ghost Dog’s adherence to the samurai lifestyle has made him an extremely difficult target.

The story culminates in a series of shootouts, most of which end badly for the mobsters.  However, could Ghost Dog’s stubbornness in adhering to the samurai code ultimately bring about his undoing? 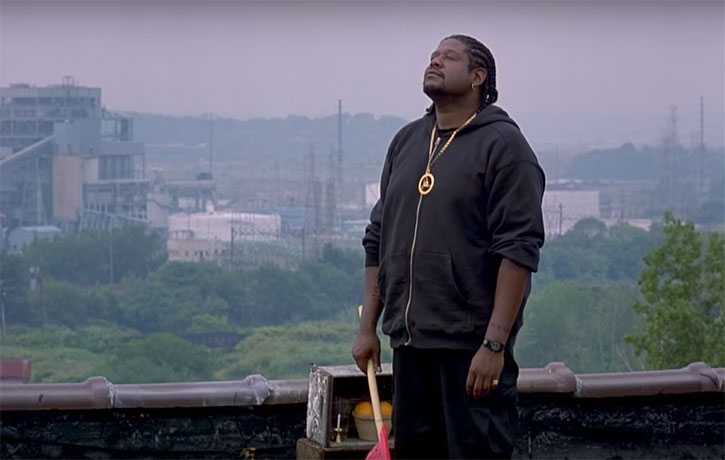 Ghost Dogs relationship with Pearline showed his characters softer side

Ghost Dogs only friend Raymond acted as an emotional sounding board

Written and directed by Jim Jarmusch, “Ghost Dog” has long periods of inactivity interspersed with scenes of extreme violence.  Although “Samurai” is in the title of the movie, this is only in the philosophical sense, as all of the fight scenes involve firearms and no traditional weapons. This will be a disappointment for action purist martial arts fans and the only glimpse of traditional weaponry is during a clunky Ghost Dog training sequence.

Despite the lack of swordplay, Ghost Dog’s precision with a 9mm pistol is surgical and exemplifies some of the key ideas of attack we see in samurai engagements.  Attacking in plain sight, striking quickly and accurately are all hallmarks of this style and are shown in the film.

Ghost Dog’s first act in the film is to complete a contract killing of a connected mobster.  This is undertaken with a calm, unemotional disposition, placing a bullet squarely in the target’s head. This shows the audience that Ghost Dog does indeed eschew the virtues of bushido, particularly self-control and loyalty to his retainer.

Ghost Dog had a complicated relationship with his retainer Louie

Ghost Dog dispatching half a dozen henchmen with as many bullets whilst commandeering a large country compound is just one example from the movie. Using an array of firearms, Ghost Dog is able to infiltrate the property, calmly dispatching his foes.  The lack of emotion displayed plays into Forest Whitaker’s calm and destructive performance.

It is obvious, however, that Ghost Dog gradually evolves throughout the film to display more emotion.  This is evidenced by his run in with two illegal hunters.  Unhappy with their ethics, Ghost Dog kills both men, but not before imparting some samurai philosophy to his victims.  Although relaxed, it is obvious that emotions are running high as the film progresses, adding another impressive layer to Whitaker’s performance.

Whilst low on martial arts-specific action, “Ghost Dog” does take the viewer headlong into many of the key philosophies of the samurai as taken from Yamamoto Tsunetomo’s “Hagakure” (which is a book offering practical as well as spiritual guidance for the warrior). For this reason alone, the film is a worthwhile watch.  Add Whitaker’s deep performance as Ghost Dog and you have a film that is surprisingly interesting and engaging.

Ghost Dog training with his blade

Forest Whitaker brought depth to his portrayal of Ghost Dog

Matt Ho is a physiotherapist and martial arts enthusiast, originally drawing inspirations from Jackie Chan’s "Police Story". Himself Asian he spent time in South-East Asia and possesses a deep appreciation for the culture. He trained in Karate briefly as a child and took up boxing six years ago training for fights in late 2015. He's had one amateur bout and several “smoker’” events. Matt now lives and trains in London, where he has also taken up Brazilian Jiu Jitsu with a goal of competing in MMA in the future. Matt also has a keen interest in the politics, matchmaking and economics behind professional MMA.