After kicking off its MMA franchise in 2014, EA Sports returns to deliver the series’ third instalment, “UFC 3”. The series has been an interesting one for gamers and MMA fans alike, with consistently improving graphics, gameplay, and schematics since its inaugural chapter.

Joanna Jedrzejczyk chops down the tree

Bruce Lee steps into the Octagon

Getting a little testy at the weigh in

With “UFC 3”, EA Sports hits the series’ highest mark yet, with a hard-hitting gaming system that is at once the most challenging and user-friendly of the series and with, in my humble opinion, perhaps the best conveyed sense of impact that the greatest MMA fighters in the world can deliver.

Michael Bisping weighs in for his next challenge

Conor is ready to rumble

A staple feature of EA Sports’ UFC series has been its vast and expansive player roster, consisting of seemingly every active UFC fighter in the world, along with many of the sport’s retired legends. “UFC 3” continues that tradition and offers up a smorgasbord of fighters that MMA fans and gamers alike will absolutely relish the opportunity to play. Everyone will have their personal favourites, but combing through the “UFC 3” roster, I’m partial to the game’s avatars of Lyoto Machida, Georges St-Pierre, Chuck Liddell, Conor McGregor (who features very heavily in the marketing), Michael Bisping, and of course, Bruce Lee. A signature character of the franchise from the start, Bruce boasts his widest array of fighting techniques in the series yet, though I’ve probably gotten him knocked out far more times than he’d be comfortable with whilst getting to grips with his control scheme -I can only hope his family and The Shaolin Temple aren’t too offended!

Bruce Lee vs Conor McGregor anyone?

The UFC series has consistently gotten better with each successive instalment, and “UFC 3” keeps the momentum going. By far the biggest improvement over the past two iterations of the series is the significantly updated grappling system, which I found to be far more easily adaptable and manoeuvrable than the first two instalments, particularly the first. Gamers will not only find the grappling dynamics of “UFC 3” much easier to manage, but it’ll also provide them with more tools to put their skills to the test. For example, if a player finds himself or herself on their back facing a mounted opponent, the game presents you with several options for how to either escape or counter-attack, from sprawling to applying your own grappling technique.

Of course, the AI of the game is careful not to make things too easy for you and that proves to be another of the game’s strong points –with “UFC 3”, players will find a more simplified set of controlling dynamics for them to learn, while the game itself makes sure to put up a challenge for the player in every fight. The striking system is some of the best seen in the series and together with the sound effects really delivers the impact of each hit to the player on an almost visceral level. Rest assured, you’re feeling it when you get kicked in the face, as well as when your opponent is.

Aside from basic match-ups in the cage, “UFC 3” also offers a variety of secondary modes and tutorial programs to allow players to sharpen the skills of their favourite fighters, along with the “Make Your Own Fighter” feature that will surely bring out a lot of gamers’ creative sides and combat adventurousness. You can also participate in online gaming, which includes the game’s ‘team’ feature. This allows you to assemble your own cadre of heavy hitters to compete against other players online, another sure-fire favourite feature amongst gamers across the world. If you ever find yourself battling some combination of Bruce Lee, Chuck Liddell, Lyoto Machida, Conor McGregor, GSP, and Michael Bisping online, that just might be me with whom you’re trading some KO blows! 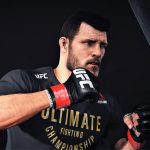 Michael Bisping works the bag for his next fight

MMA fighters can kick with the best of them

The UFC holds a press conference

“UFC 3” is EA Sports’ most finely-tuned and refined instalment in their UFC gaming franchise to date. Players will find every aspect of the game, from graphics to fighting dynamics, not only the most polished of the series, but also designed in such a way as to more easily guide them through the techniques of each fighter whilst still pitting their wits up against an exciting and dynamic, vigorous challenge to conquer. Three titles in and EA Sports continues to simultaneously evolve and refine their “UFC” series. After “UFC 3”, with the advances we’re seeing made month on month in the tech and virtual reality worlds, it’ll be more than just a cyber thrill to see what’s in store for the next one!

What are your impressions on UFC 3, or if you’ve played it, what do you like about it or think could be improved? Let us know in the comments below, join in the conversation on Facebook and follow us on Twitter. If you’re into fighting games check out our other combat game reviews. You might also like our Top 10 Fighting Games From The 1980’s! and Top 10 Video Game Movie Fights!