“Crazy Samurai Musashi” isn’t a movie, it’s an experiment. It’s not a hero’s journey, it’s a battle for survival. It’s not telling viewers a story, it’s setting a battle of impossible odds in motion with all onlookers just being along for the ride. In its brisk, hour-and-a-half run time, it’s all of these wrapped up in the celluloid suicide mission of capturing one man’s hack-and-slash last stand against over 500 enemies in a single 77-minute long shot.

Quite simply, it is, as its title implies, crazy. And with Japan’s answer to Donnie Yen single-handedly carrying the movie’s non-stop chop-aganza as the king of all samurai, crazy is as high a compliment as there can be for the out-and-out wild action blowout that is “Crazy Samurai Musashi”!

Tak Sakaguchi assumes the role of the legendary samurai, Miyamoto Musashi, with Akihiko Sai portraying Baiken Shishido. Kento Yamazaki plays Chūsuke with Masaaki Takarai appearing as the head of the Yoshioka clan. A few dozen stuntmen also appear on-screen, interchangeably playing the hundred upon hundreds of samurai adversaries our hero is forced to single-handedly hold his own against.

The Yoshioka clan is preparing for a duel against the famed samurai Miyamoto Musashi, following the death of their master Seijuro, by his blade. With literally hundreds of members of their clan waiting to pounce on their enemy the moment he arrives, Musashi takes them all by complete surprise, arriving out of nowhere and vanquishing his opponent with a single slash. From that point on, it’s an all-out war with Musashi standing his ground against tidal waves of sword-wielding enemies, with only his own trusted blade standing in their way.

Chusuke is losing his patience

When it comes to story, screenwriting, and character development, “Crazy Samurai Musashi” has got nothing for you, but to call that a knock against it is to miss the point altogether.

The film isn’t a biopic of history’s most famed bushido master or even of an adventure steeped in historical fiction like so many period epics. It’s a go-for-broke, swing-for-the-fences, Hail Mary exercise in single-take action that sets the bar insurmountably high.

In everything from the off-the-chain single shot action scenes in “Daredevil” to “1917”, structuring an entire movie to resemble one continuous shot, single-take action is a marvel to behold when it’s pulled off well. “Crazy Samurai Musashi” sets a new standard for all of that – set up the camera, hit record, and catch every slice, cut, chop, and slash until the battle’s over.

Chusuke thinks his trap for Musashi will all work out

Despite only running for 91 total minutes, no movie has ever been more fittingly referred to as “exhausting” than “Crazy Samurai Musashi”. Its title character spending perhaps one-tenth of the whole film not surrounded by sword-wielding foes, the battles are periodically broken with the increasingly winded Musashi vanquishing one wave of opponents to just about catch his breath and gulp down some water as time permits. These pit stops never last long however, with our hero soon finding himself facing down a wall of blades once again.

Prepare for an Intense, Sword-Action Extravaganza

It’s easy to bestow video game comparisons upon action movies that just hit the gas from the moment they get started, but “Crazy Samurai Musashi” feels like being dropped into the middle of a video game like almost no samurai movie ever has.

Curiously, the more basic nature of the way it’s filmed also gives it the feel of a found footage movie, certainly a first for the samurai genre. 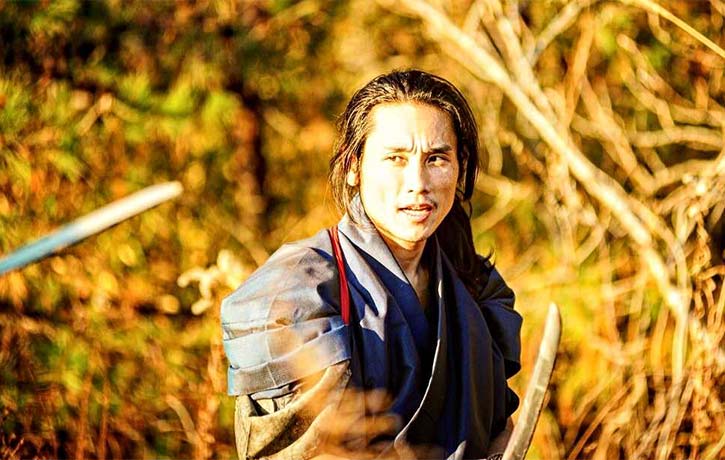 Musashi knows he must remain alert at all times

Soaking up the Battle against Odds & Steel…

Whichever track of comparison one chooses to make, it’s impossible not to get submerged in one man’s battle against odds that are overwhelmingly against him at every turn.

That doesn’t mean one couldn’t split hairs here and there if they were so inclined. The premise of the movie being so basic can make the action feel a little too down to earth at times, with Musashi frequently felling individual foes with a single chop to the head or shoulder. Additionally, a noticeable nitpick emerges after a while by the fact that Musashi and his enemies should be stepping over literal piles of bodies to get to one another.

Whatever issues one may find to take, they all take a back seat to the universality of a warrior who simply will not back down. As perhaps a bit of a cool down from the arduous trek that the rest of the film represents, a final, rain-soaked one-on-one duel along with Musashi fending one last cadre of enemies, the latter a traditionally edited battle, act as the curtain closer – taking the movie out on a note as clean and efficient as Musashi’s own swordsmanship.

Musashis enemies have no idea how much theyve underestimated him

Whatever issues one may find to take, there’s no denying that “Crazy Samurai Musashi” is a mammoth samurai war that Kurosawa himself would be in awe of. Moreover, in carrying a movie that calls upon him to spend practically the entire run time chopping up hundreds of opponents, Tak Sakaguchi’s place among the greatest action stars of all-time is forever set in stone (though that arguably happened right after “Re:Born”.) Speaking as someone who recently fan cast Tak for “John Wick 4”, “Crazy Samurai Musashi” single-handedly makes that case the no-brainer of the year!

Musashis enemies have tracked him down

You will have the chance to see “Crazy Samurai Musashi” through its upcoming release via Well Go in the USA. Stay tuned for more details about other territories soon! Excited to see “Crazy Samurai Musashi”? What are some of your favourite samurai movies and what do you consider to be your favourite one-shot action scene of all time? Let us know in the comments below; Like, share and join in the conversation on Facebook and follow us on Twitter & Instagram!

ROUSE YOUR INNER SAMURAI in the FU-niverse of these Top 5’s, Top 10 Samurai Movie Fights as well as these extra Top 10’s, exclusive interviews, test your metal in KFK OFFICIAL gear and subscribe for more incredible on-point combat action via YouTube!

Jorge Masvidal: Inside the Mind of a Real-Life Street Fighter

Khabib Nurmagomedov: Inside the Mind of the Russian Eagle