The battle for the fate of the realms commences once again in “Mortal Kombat Legends: Scorpion’s Revenge”. Brought to life by the animation studio behind many of the greatest DC animated movie hits, “Scorpion’s Revenge” doesn’t cover much new territory for the MK devoted, but is still a cornucopia of hard-hitting, blood-soaked battles between supernatural warriors, no-nonsense military commandos, and overconfident movie stars that lovers of the games won’t want to sit out!

Goro is as intimidating as ever

Scorpion is determined to get his revenge on Sub Zero

Hanzo Hasashi once lived humbly in feudal Japan, rearing his young son Satoshi in the ways of the Shirai Ryu ninja clan. However, his world is destroyed when Shirai Ryu’s sworn enemies the Lin Kuei, led by Sub-Zero, massacre Hasashi’s village before killing both of them. Hasashi soon finds himself in a new plane of existence known as the NetherRealm, where he is given an opportunity by the sorcerer Quan Chi – to enter the upcoming celestial martial arts tournament known as Mortal Kombat and steal a key that can free Quan Chi’s master Shinnok, in exchange for the chance to take his vengeance on Sub-Zero, one of the tournament’s competitors, along with resurrecting his wife and son.

Hasashi agrees, and arrives just as the opening ceremony of Mortal Kombat begins. Little does Hasashi suspect that the fate of Earthrealm hangs in the balance. Should the forces of Outworld, led by Shang Tsung, win their tenth consecutive victory in Mortal Kombat, Earth will fall into their hands, with only the Thunder God Raiden and his chosen warriors Liu Kang, Sonya Blade, and Johnny Cage standing in their way.

If there’s anyone who thought an animated “Mortal Kombat” couldn’t deliver the goods on the unapologetically gruesome action and off-the-chain fatalities that the series is famous (and upon its original debut, infamous) for, they’re in for a rude awakening with “Scorpion’s Revenge”.

If anything, the animation team has so perfectly encapsulated the essence of the movie’s namesake that there are moments that are genuinely hard to watch here, from Jax’s loss of his human arms to two-thirds of the instances of Scorpion deploying his spear. Speak of the devil, with Scorpion being one of the signature characters of “Mortal Kombat”, moving him into the spotlight gives the movie a fresh feel, even if it at times seems to forget that while drifting back into being an ensemble.

The movie also absolutely nails the trio of Liu Kang, Sonya Blade, and Johnny Cage, with the latter being relentlessly cocky even by his own egotistical standards, though Kitana is sadly underutilized. Once everything arrives on the island, the movie settles into a non-stop barrage of martial arts showdowns and one-liners, and with that comes both its greatest strength and its Achilles’ heel.

From the halfway point on, “Scorpion’s Revenge” is almost nothing but action, and it certainly delivers with gory fatalities and each character’s signature moves from the games.

The battles are also intercut with X-rays of the internal damage being inflicted, directly carrying over the X-rays incorporated into modern “Mortal Kombat” titles. The movie also has some fun in holding off on Johnny Cage’s genuine fighting prowess by having him bumbling around mistaking the whole tournament for a reality show, surviving largely by luck (and taking multiple disgruntled kicks to the crotch from Sonya Blade) before fully leaping into action in a truly satisfying coup.

Scorpion and Liu Kang prepare to face off

Johnny Cage realizes that Raiden has a surprisingly strong grip

Scorpion throws everything hes got at Sub Zero

The film also dials back Liu Kang’s usual physical omnipotence a bit while adding a new shade to his character with his desire to prove himself to Raiden driving him just as much as his determination to save Earthrealm.

Where “Scorpion’s Revenge” stumbles, ultimately, is the fact that it’s largely following the normal tournament-based template of the franchise and its characters while not injecting all that much in terms of new material beyond the shifting focus to Scorpion. Still, this very added element pays off splendidly in the climax, with Scorpion, having largely been disinterested in the battle of the realms unfolding around him, then finally picking a side and unleashing all hell as only he can.

Lord Raiden brings the thunder as only he can

Scorpion gets his bearings for Mortal Kombat

“Scorpion’s Revenge” doesn’t reinvent the wheel of the “Mortal Kombat” canon, but it does give fans of the franchise everything they demand while the plot gives Scorpion a rare opportunity to step into the driver’s seat.

The movie hits the bull’s eye on virtually every one of the series’ beloved kombatants, with Johnny Cage in particular being even more of a motor-mouthed know-it-all than normal, while the action scenes are both relentlessly frequent and relentlessly ferocious. For anyone looking for 80-minutes of over-the-top, supernaturally-powered butt-kicking, “Scorpion’s Revenge” entertains with unparalleled vengeance!

Sonya Blade is amused by how often her enemies underestimate her

Liu Kang summons all of his might to defend Earthrealm 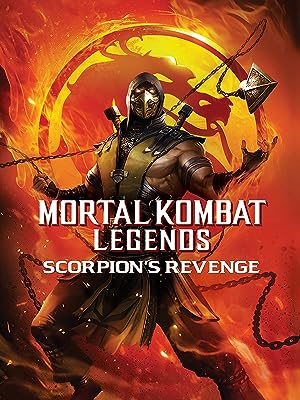