“Mechanic: Resurrection” does exactly what it says on the tin, if you want high-paced exciting and audacious action then this is the film for you. Explosions, guns, plenty of martial arts crossover action and Jason Statham in full force are the film’s greatest assets and it holds no shame in utilising them to full effect.

The film is well thought out and some of the narrative set pieces are very clever, adding an extra layer to the bone-crunchiness of the rest of the film, the Mechanic’s signature move of making his missions look like an accident lead to some creative and original assassinations that seem to come straight out of comic books!

Jason Statham is a reliable action star and does not disappoint in his role as the enigmatic Bishop. His character has a personal vendetta with the lead antagonist, Crain and this dynamic allows Statham’s character to explore some back story and flesh out the narrative. The film does not make the mistake of having an action star overact, Bishop lets his fists (elbows, knees etc..) do the talking and that is exactly what he does best!

Jessica Alba plays opposite Statham as the damsel-in-distress, Gina. This damsel is a tad feisty however, as she has plenty of fight and chips-in with some KravMaga style moves of her own during some of the fight scenes. As the love interest and co-star, Alba has a large role and shoulders many of the film’s more emotional and narrative-driven scenes, allowing room for Statham to focus on the action.

Other roles include England’s Sam Hazeldene of “Peaky Blinders” as the main antagonist. Tommy Lee Jones, with typical flair, plays an eccentric arms dealer who Bishop is assigned to assassinate. Martial arts film fans will enjoy the appearance of legend Michelle Yeoh (“Crouching Tiger, Hidden Dragon”, et al) who provides Bishop with a safe haven and acts as a maternal figure for Statham’s robust action hero.

Despite efforts to lay-low and technically no longer existing, Bishop is tracked down by crime boss Crain, an old acquaintance, and is forced into executing three of his enemies. Bishop’s new partner Gina is captured by Crain and used as collateral, in order to force Bishop to carry out the assignments. Every mission includes a seemingly impenetrable fortress, a time limit and must look like an accident (handy for Bishop it’s his speciality!).

The plot serves as a vehicle for the action set pieces, which takes the film across the globe in some impressive locations including Thailand, Malaysia, Australia and Bulgaria. The locations add a genuinely scenic quality to the film and provide an excellent backdrop for a stunning action adventure. 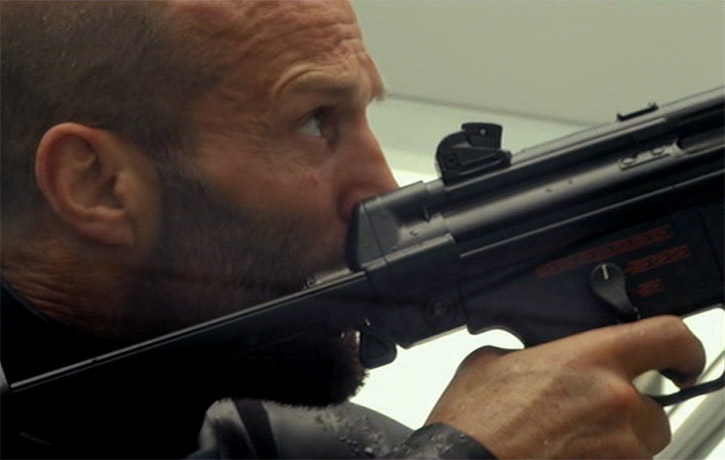 Bishop and Gina in action

Action is off and running from the start of this film and it doesn’t take too long before fists or bullets are seen once again hurtling through time and space. The opening fight scene is one of the best in terms of fist-fighting and plenty of martial arts style techniques are displayed in the combat, as well as more conventional western combat moves based on boxing. Aikido and Krav Maga seem to be the main influences in terms of the combat style, and there are plenty of good joint manipulations and self-defence style striking. At one point Bishop savagely uses a shoulder lock variation to shove someone’s face into a barbeque, gruesome!

The film blends the use of fists and guns well, guns have to play a part in this genre of action movie, unless there is a plausible narrative reason to remove them then it would seem incoherently uncanny. The film still has plenty of hand-to-hand combat and is also adept at using improvised weapons as part of the combat in both the gun-fu and the fist fighting; tables, prison bars, a boat and a barbeque are just some of the accessories which are utilised in combat, homage to the legendary Jackie Chan? anyway we think he would be proud!

Our two heroes down at the beach

Thats one way to catch a tan

The final fight scene, which takes place on a yacht, is very dramatic and features some great fighting which encompasses different types of combat, including some excellent knife fighting. Jessica Alba, herself a practitioner of Krav Maga, chips in with some Krav style fighting, including elbows and a groin shot, whilst guards on the boat are trying to take her hostage. Bishop attempts to clear the boat using some excellent stealth, a silenced pistol and some clever improvisation to work his way through all of the guards, meaning one of them gets put in a shoulder lock and used as a human shield. Eventually he ends up in a dramatic duel with the archenemy Crain, in a brilliant scene in which he hangs from a steel boat on the yacht and uses it as cover in the gun battle.

“Mechanic: Resurrection” is a fun action film with a good balance of action styles all the way through. The plot is not over complicated and so never hopes detract from the action! A mix of high concept action stunts, scenic locations and innovative action set pieces give the film a well-rounded, dynamic and satisfying feel, with the performances for the most part allowing for enough emotional absorption to draw in the audience’s attention. A little less high drama than Bond and a little more light-hearted than Bourne but with all the fun and buoyancy retained!

The family barbecue was going so well until..

Crain with his right hand man