If you still haven’t seen the Most Complete Fighter in the World return to the ring in “Boyka: Undisputed 4“, you’re missing out on some of the most incredible martial arts action you’ll ever feast your eyes on. One of the men at the centre of the action is stunt fighter Brahim Achabbakhe, who appears in the role of the villainous Kazmir and struts his stuff in an eye-popping MMA duel with Scott Adkins that will leave you breathless!

Today, Brahim sits down with KFK to share his experience of making the film and some of his other upcoming projects, including the soon-to-be-seen “Bleeding Steel” alongside the one and only Jackie Chan!

Brahim is ready to battle Boyka in Undisputed 4!

Hi Brahim, thank you so much for the pleasure of this interview! Hope you’re doing well?

Hi Brad, I’m doing great, thanks for having me here today on KFK!

Awesome! Well, let’s kick off with how you first became involved with “Boyka: Undisputed 4”?

I got involved in “Undisputed 4” after fight coordinator Tim Man suggested me for the part of Igor Kazmir. Producer Isaac Florentine knew of my abilities and Tim Man pushed for me cause I could just come in shape ready and ready to do whatever fight choreography he would design. After Scott and Isaac agreed, the producers contacted me with a deal and I was on a flight for Sofia, Bulgaria two weeks later.

They definitely chose wisely getting you onboard for the role of Kazmir! So, what interesting stories can you share about the making of “Undisputed 4”?

I remember after I finished my fight scene with Scott, Isaac and Tim thought it was too short so they were thinking of making it longer, but we didn’t have the time. One day a little accident happened on the set and one of the fighters needed a few stitches, so they had to find something else to film that day. I was basically in my suit wardrobe and got told to change into my fight wardrobe. Tim came up with new choreography on the spot and Scott and I shot additional sections for our fight. It didn’t require very many takes and I had a very good flow with Scott -I think probably because we have a similar build and style, so it was really easy to fight him.

Sounds like the fight between Boyka and Kazmir got upgraded for the better. So, what were a couple of memorable moments in filming your fight scene with Scott Adkins?

As a martial arts actor the whole process of filming that movie was a dream come true. Scott was very helpful to me and gave me great advice when we shot not for the fighting but more for the acting. I told him candidly that if he saw something I did that he felt was bad to please let me know. I remember him telling me good job at the end of the movie and saluted my acting. One of the other memorable moments was getting that 720-Guyver kick to my head, I loved it. It only took three takes. We went really hard on the hits and the went for a lot of contact to the body, but we enjoyed every minute of it because we knew the final result would be memorable.

It most certainly was. Were there injuries or mishaps if any took place in your fight with Scott?

We completed that fight scene without any injuries or mishaps. I am really used to doing fight scenes and condition my body as well so it can take some impact. Scott himself worked many times in Asia so he’s got no problem with taking a bit of contact which is great cause some actors are really demanding for you to not make a single contact with them. Scott is a hard worker and he would never complain if it helps make the take work.

Brahim with the legendary Yuen Woo-ping

Definitely. So, how would you compare the making of “Undisputed 4” with “Ninja 2: Shadow of a Tear”, where you served as Scott’s stunt man?

“Ninja 2” was shot in Thailand which is really humid, and we shot a lot outdoors. I was also younger and much less experienced compared to when I did “Undisputed 4”. “Ninja 2” was a stepping-stone though and it is the reason I got onto “Undisputed 4”. On the other hand on “Undisputed 4”, I was an actor there so had many more amenities, and a personal waiting area which I never used because I just wanted to be around the set and see what was happening. Honestly, I did enjoy the “Undisputed 4” experience better than “Ninja 2” and hope it can bring me many more roles in the soon future.

Nice to hear you got quite the promotion via “Undisputed 4”. Moving onto some other things, you’ve also worked several times with Jackie Chan including his latest movies “The Foreigner” and “Bleeding Steel”. How is it being a part of or working with Jackie Chan’s stunt team?

For “The Foreigner”, one of Jackie’s coordinators flew me to England to do a fight scene against Jackie, but unfortunately some union rules stopped me from doing my job, so I ended up spending one week in England getting paid to be on set. The same year I worked on “Bleeding Steel” though for seven months, being used in a lot of the scenes for the movie and also doubling Callan Mulvey for the opening scene. I think working with Jackie Chan has always been a great experience for me and Jackie is one of the most generous people I’ve ever met. He takes all of us to eat in fancy restaurants, gives us presents, clothing and a lot of good advice. I made a lot of good friends in the team over the last 3 years.

Indeed, Jackie and his stunt team are among the cream of the crop! You’ve also worked with Yuen Woo-ping, what was the most valuable thing you took from that experience?

I think I saw how calm and very humble Master Woo-ping was. It really showed me that you don’t need to be shouting at everybody to be respected.

There are getting to be fewer and fewer that I haven’t worked with, honestly! I can’t believe how many talented legends I worked with over the last ten years. I recently worked with Donnie Yen on one of his new films thanks to Mike Leeder and his coordinator Kenji Tanigaki who brought me over to HK. Now I would love to fight against Iko Uwais in a solid martial art film. 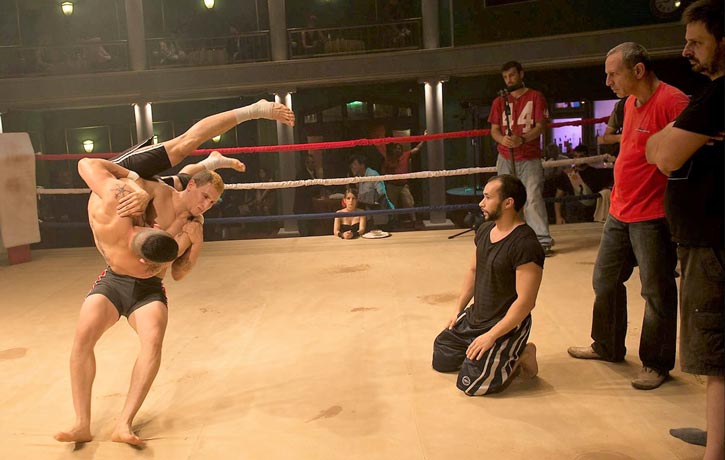 Brahim has some good friends

That’s what we’re waiting for! On that note, what are your Top 5 kung-fu movies that you love to watch and re-watch nowadays?

Brahim savors his victory in Undisputed 4

Solid ones all round! Thanks so much for the privilege of this interview today, Brahim, keep in touch.

Always my pleasure to share stories with Kung Fu Kingdom!