Director Rowdy Herrington’s partnership with reputable screenplay writers has produced some of the 80s’ and 90s’ most pumped-up kick-ass action flicks. With “Roadhouse” he worked with “Out for Justice” writer David Lee Henry on a film that remains a cult favourite, a modern-day western with the late Patrick Swayze saving the day. Here he teamed up with “Karate Kid” writer Robert Mark Kamen to revisit the underdog tale set in the dangerous world of underground boxing.

James Marshall debuts in his first cinematic outing and his only lead role as Tommy Riley, a young kid who finds himself caught up in the merciless world of illegal boxing run by unscrupulous former boxer turned promoter Jimmy Horn, a brilliant turn by Brian Dennehy. Fresh from his breakthrough role in “Boyz N The Hood” is Cuba Gooding Jr as Abraham Lincoln Haines, Horn’s star boxer fighting to provide for his young family

In Tommy’s corner is Jon Seda, school friend and fellow boxer Romano; Ossie Davies plays Noah Tommy’s corner man who becomes a mentor to his young charge. Cara Buono provides the love interest as Dawn. Stacking the odds against Tommy are Pappy Jack, Jimmy Horn’s right-hand man and talent scout played with great aplomb by Robert Loggia, and Lance Slaughter hamming it up as gang leader Shortcut who for no apparent reason has taken a dislike to Tommy.

Tommy Riley finds himself living in a rough part of Chicago after his father’s gambling sees them forced out of their well-to-do life. After being spotted in a street fight with local hoodlum Shortcut, Tommy is recruited by Pappy Jack for his boss Jimmy Horn and his illegal boxing circuit. Seeing an opportunity to pay off his father’s debt, Tommy agrees to one fight but Horn sees potential to earn big money and makes a Tommy an offer to continue fighting, an offer he daren’t refuse.

Boxing films rarely glamorize the sport they portray however “Gladiator” takes a step further adding a tense primal quality echoing Jimmy Horne’s sentiment of why audiences get excited at fights; “it’s the presence of death”. This atmosphere that oozes out of the screen with the film’s message laden narrative knitted into the bloody and brutal fights add gravitas and drama to the action. Every fight scene is packed with technically rich boxing action as well as some moves that would violate the rules of mainstream regulated bouts. The story and action are grittily shot and edited with Brad Fiedel re-imagining his “Terminator” score in the mix raising the dramatic tension.

A new bond begins to form

Romano and Tommy warm up before the big fight

In amongst the double dealing, blackmail, gang fights and high school love interest is fight co-ordinator Jimmy Nickerson and an uncredited Benny “The Jet” Urquidez’s hard-hitting fight action. From the outset, it’s clear this is not a film for the faint-hearted as blood and spit flow as fast and freely as the fighters’ jabs and hooks. The illicit, underground setting allows Nickerson and Urquidez to stage some life or death battles in the ring adding in some low blows, knees and elbows that up the fights’ danger factor making them riveting viewing. All the fight cast handle the fight choreography with aplomb convincingly, conveying natural ability and brutal aggression.

Marshall as Tommy, impresses from the outset in his first fight showing off some technical fisticuffs know-how looking every bit the part of an in-ring athlete-warrior. From the first fight, every punch he throws and takes devastatingly resound. Gooding is equally impressive adding meat to the bones of a likeable street kid whose antics mask a more serious duty. In the ring Gooding is like a young Muhammed Ali, a tough-hitting talented showman.

The storyline’s relationship and conflicts grow and climax in the ring with all the excitement and tragedy of such a steely story. Kamen’s script plays these out at a perfect pace leading us ringside for not just one but two inevitable and emotionally charged finales. Pitting Tommy against Lincoln might have been foreseeable but the chemistry between the two leads lifts this moment above cliché. Both Gooding and Marshall give performances as powerful as their body shots, with tension bubbling and emotions stirring, leading to the film’s high point as Tommy then faces the unscrupulous Jimmy Horn.

A bloodied Horn moves in for the finish

Not all fights happen in the ring

The battle just got bloody

Lincoln moves in for the finish 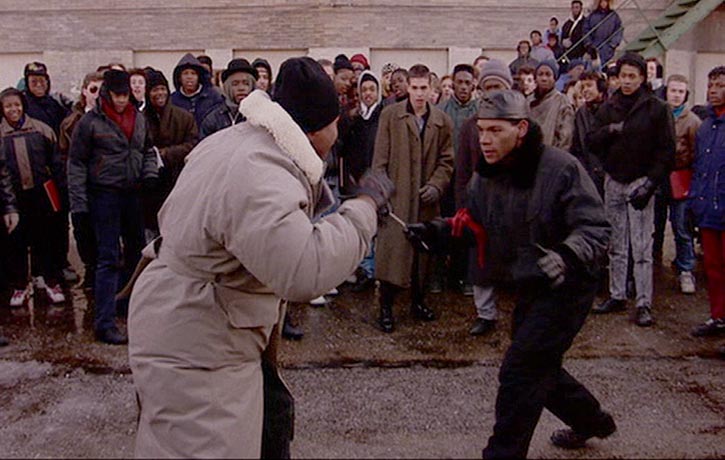 Rivals Shortcut and Lincoln square off 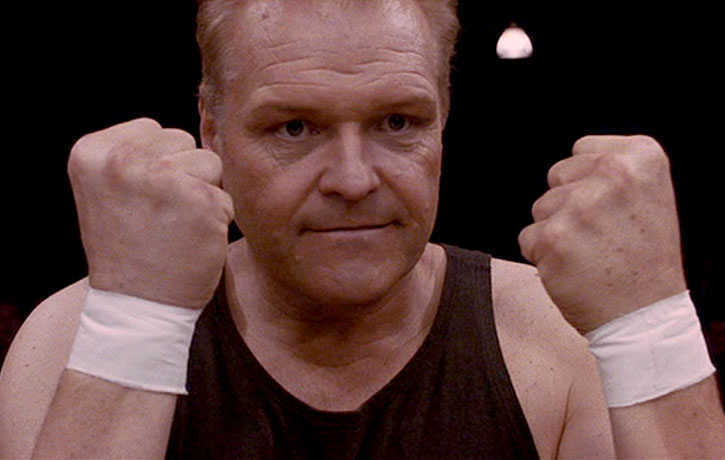 Horn lays down the rules of the game

If “Roadhouse” proved anything it was that Benny Urquidez can take an actor with no fight training and turn them into powerhouse fighters. Here it is evident that veteran actor Brian Dennehy had undergone a lot of physical and skilful training, moving like a hardened old school boxer. All the film’s top-class qualities come together for this blood-soaked main event that turns into a battle of wills and tactics with all the excitement of a real boxing bout.

When settling down to watch “Gladiator” be sure to have your boxing movie checklist and a pencil handy. It’s hard to ignore the swathes of clichés in the film but they are all flawlessly played out. Where “Rocky” and “Raging Bull” set the bar high for gritty drama and brutal boxing action, “Gladiator” fights to the top going the distance with pure all-round entertainment in its corner. It is unashamedly clichéd, saved by a strong story and stellar cast performances. The in-ring action ultimately is gripping, expertly choreographed and packed with plenty of drama, all making “Gladiator” a real contender as a great boxing movie.

Romano gets warmed up

Lincoln always ready for a fight

A victory knockout for Lincoln