We were invited to attend the first Festival Asia, held in the famous Tobacco Dock in Central London. Taking place over three days, this pioneering festival attracted thousands of visitors with it’s mix of Eastern music, dance, food, fashion, martial arts and culture.

There were busy food stalls featuring every kind of Asian cuisine you could think of, and proving extremely popular with visitors were the many workshops that they could take part in for free. These ranged from yoga classes, Mandarin and Chinese calligraphy lessons, and even Japanese Taiko drumming classes!

Of primary interest to our roving reporters though was the diverse range of martial arts demonstrations on display.

Demonstrations included traditional kata and forms, some extremely effective self defence techniques, weapons skills, and various physical feats illustrating just how well-trained some of these performers were.

One of the highlights of the martial arts demos was from a group who had flown in from Indonesia especially for the festival. Pencak Silat Tiga Berantai are the same Silat association that “The Raid” stars Iko Uwais and Yayan Ruhian trained with. They gave excellent performances of their open hand routines, and invited members of the audience to try out some of the techniques that they teach. 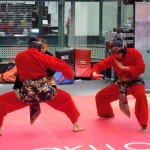 Kung Fu Kingdom were also lucky enough to catch up with Sifu Garry McKenzie, who is a senior student of Ip Man’s son, Grandmaster Ip Ching. His students gave an impressive performance of all aspects of the art of Wing Chun, from its traditional routines and weapons, through to its practical applications.

The festival organisers hope that the success of this event will lead to further Festival Asia weekends in cities all over the UK, such as Birmingham, Belfast and Edinburgh, and even across Europe.

We look forward to visiting the next Festival Asia!