The mood is sombre and the hits are frequent in “Dragon Eyes”, a dark and melancholy urban vigilante thriller with MMA great Cung Le as an ex-convict determined to clean up the streets of his city. While not having quite as predictable an upward trajectory towards its final act as you might expect, “Dragon Eyes” benefits greater from its well-orchestrated fight sequences, Cung Le’s understated screen presence, and Jean-Claude Van Damme‘s performance as our hero’s weathered mentor.

The town of St. Jude Square is a cesspool of warring gangs, ruled over by corrupt police chief, Mr. V. However, things start to change with the arrival of a former convict Ryan Hong. During his time in prison, the formerly despondent Hong was transformed into a fighting machine by his cell mate, Tiano, and given the task of cleaning up the streets of St. Jude after his release from prison. Hong wastes no time in making good on his mission, and Mr. V quickly takes an interest in Hong, recruiting him as an enforcer to keep his cut of each gang’s spoils flowing into his coffers. However, much to his chagrin, Mr. V soon discovers that Hong has other plans.

Hong nails this enemy with a mighty sidekick

“Dragon Eyes” isn’t exactly breaking new ground with its story of the mysterious stranger who rides in to clean up a corrupt town, but what sets it apart is the almost powder keg-like quality that director John Hyams brings to the film’s plot line and action sequences. We first meet Ryan Hong in prison, a man with all traces of happiness drained from his face as he simply tries to stay out of trouble in the yard, only for an aggressive fellow inmate to force him into a fight he does not want. Tiano steps in to help out. We never get the full story about why he’s in prison, but some flashbacks throughout the film hint at a wrongful death he wishes to atone for.

When Ryan arrives in St. Jude, he wants nothing more than to just get the key to his new apartment, but a loitering gang push his buttons beyond his ability to tolerate their aggression. Every action set piece throughout the film plays out with that kind of horror movie tension – Hong’s either about to get the drop on his enemies, or is simply trying to mind his own business. When the fists are about to fly however, Hyams makes sure we know it’s coming far enough in advance to play the audience into a gripping, torturous tension. 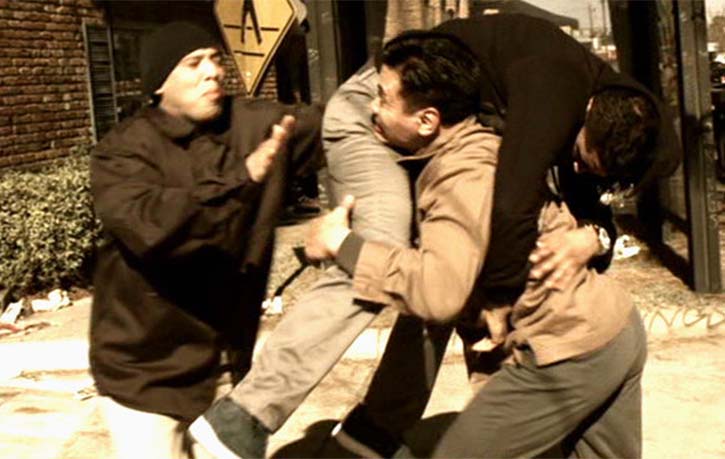 Taking two out for the price of one 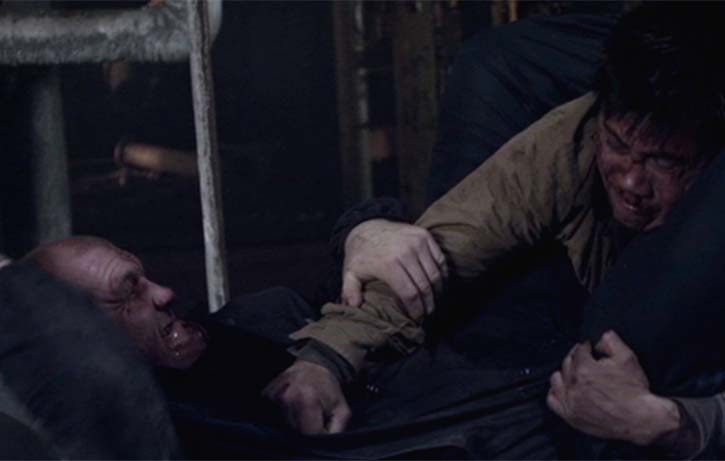 Hong finds himself trapped in a triangle choke

Hong catches this opponent off guard

The film’s sepia-toned, drained-out color scheme, rendered almost black-and-white in the prison flashbacks, further elevates the tension – and the world of St. Jude is bland, foreboding, and unpleasant, with Mr. V seemingly it’s only resident. Under Hyams’ direction, Hong trades one hellhole for another, and while he’s got the skills needed to clean things up, it’s not going to be easy or pleasant.

Virtually every fight sequence in “Dragon Eyes” is preceded by a build-up of tension, including right at the beginning with Hong’s pummelling of the gang outside of his newly rented apartment. This same street corner later serves as the setting for a stand-off between Hong and two gangs, lacking only a bouncing tumbleweed to seal the deal as a clear spaghetti Western homage. 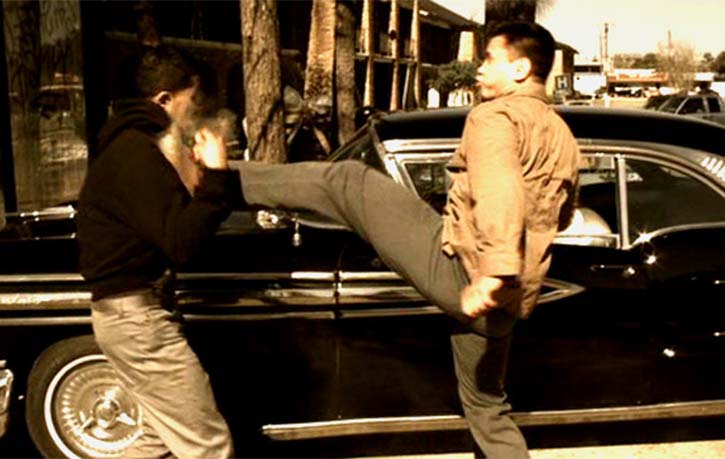 Hong gives this guy the boot

Hong comes in with an axe kick

Nearly every fight sequence in the film has the feel of a bomb being set off, and while Hong dishes out plenty of spinning kicks and takedowns, the way Hyams presents it actually makes the action feel more raw and less flashy than you’d expect for our hero being such a kicking machine. The only place where the film really eases things up is in a sparring match between Hong and Tiano in prison, mostly captured in slow motion and presented with a feeling of peace and serenity not seen anywhere else in the film.

Jean-Claude Van Damme’s role is only slightly more than a cameo, but his presence is still a palpable one in the film’s frequent prison flashbacks. The film doesn’t quite stick the landing, however, when the finale comes around. The atmospheric tension that precedes every fight in the film is still in place, but it doesn’t feel like it’s accumulated the kind of forward momentum you’d expect for a final confrontation like this. The ending also feels a little on the abrupt side by the time the end credits kick in. Nevertheless, the audience is still treated to one last solid exchange of fists and feet with Hong facing Mr. V’s goons in a warehouse, plowing through them all with the tank-like force he’s proven to own since his arrival in St. Jude.

Rosanna isnt sure if she should support Hong

Tiano trains Hong in the art of kicking

Hong dreams of the day when hell have his freedom back

With its blend of a modern-day Western and urban vigilante thriller, “Dragon Eyes” is a tight and confidant action thriller. While the finale isn’t quite as strong as the film preceding it, the fight sequences nail it with an explosive intensity. Cung Le carries the film with an understated performance of few words, while Peter Weller hams it up with his usual villainous zeal, with Van Damme finding a nice groove in the role of a grizzled mentor. With John Hyams’ talent for injecting a build-up of intensity into action sequences, and a different overall ‘tone’ “Dragon Eyes” is definitely worth checking out. 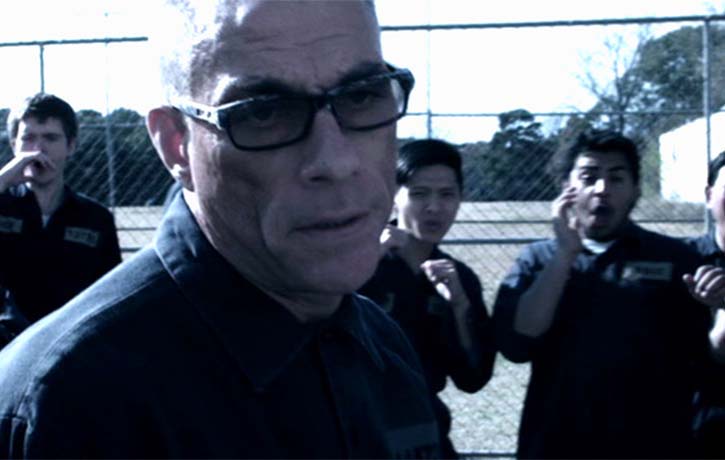 Tiano comes to Ryan Hongs aid in the prison yard

Rosanna and her grandpa are very close

What did you think of “Dragon Eyes”? Which other action stars would you like to see Cung Le team up with; and which other MMA fighters would you like to see in the new breed of martial arts films coming up? Let us know in the comments below; Like, share and join in the conversation on Facebook and follow us on Twitter & Instagram. Click on for more FUflix and if you missed it above, KFK’s in-depth interview with Cung Le himself!)