Home » News » Deleted Scene: The Night Comes For Us!

Deleted Scene: The Night Comes For Us!

Following a half-decade of development hell, Timo Tjahjanto’s “The Night Comes for Us” arrived on Netflix on October 19th, and instantly claimed the title of the year’s undisputed, greatest martial arts film. While it’s a bloodbath that the squeamish certainly need not apply for, “The Night Comes for Us” is THE Silat-FUelled smackdown to beat for action nuts in 2018. However, ICYMI, it seems that Netflix and Tjahjanto have more to share with us with a recently released deleted scene, which you can see below!

The scene in question sheds some background on Julie Estelle’s mysterious female assassin known only as “The Operator”. Estelle famously blew audiences away in the role of “Hammer Girl”, a mute killing machine who either smashes or shreds her foes with a pair of claw hammers in 2014’s “The Raid 2“. Estelle’s next action-heavy role would come in 2017’s “Headshot“, co-directed by Tjahjanto and Kimo Stamboel (collectively known as “The Mo Brothers”), reuniting her with “Raid 2” co-stars, Iko Uwais and Very Tri Yulisman.

While few details are given on The Operator’s origins in “The Night Comes for Us”, Estelle steals the show to some degree, her cold-as-ice persona giving electrifying performances in the action department – that’s nothing to sneeze at given that her martial arts experience only began with her training for “The Raid 2”!

Aside from shedding some light on The Operator’s place in the film’s larger story, what’s especially interesting about the new deleted scene are the circumstances of its release. The scene dropped recently via Netflix Indonesia’s YouTube channel amid a number of cryptic social media posts on Tjahjanto’s part, alluding to a continuation of the story. Arguably Tjahjanto’s most explicit tease came a few days after the film’s release on Netflix which you can see below (and which remains pinned at the top of Tjahjanto’s Twitter feed as of this writing):

By watching The Night Comes for Us thru Netflix instead of illegal means, you’re greatly contributing to the Night Trilogy possibly coming full circle.

Tjahjanto further teased fans of the film with an Instagram post on November 3rd – seemingly more specifically tailored to The Operator:

Most recently, Tjahjanto alluded to a “next time” for The Operator in a post on November 27th tying into the latest deleted scene: 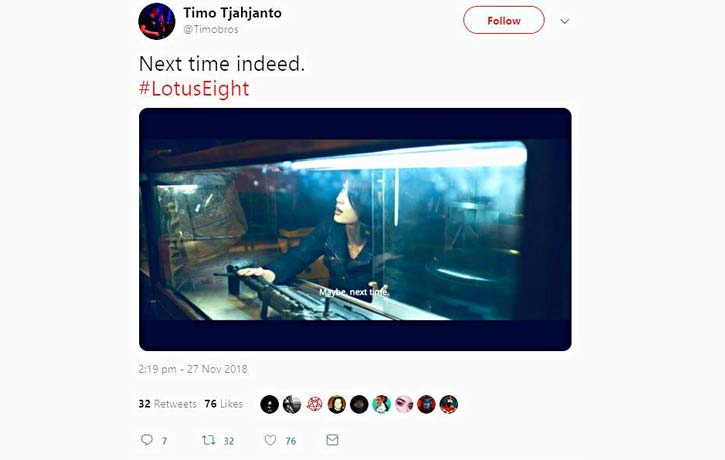 For its part, Netflix Indonesia got in on the teasing themselves with the released blurb, alluding to a larger world and a possible continuation of “The Night Comes For Us”:

“Shortly after her confrontation with Ito, the shadowy Operator, now conflicted, visits her overseer, the Night-Handler. This scene elaborates further the complex world behind the TNCFU universe; Foreshadowing The Operator’s mysterious employer, a yet unknown organization that has a part to play in the hunt for the Six Seas.”

With all these teases centering around The Operator, culminating in the exposure of the deleted scene, it would appear to indicate that a spin-off focused on Estelle’s character is possibly in the works. Given the (SPOILER ALERT) fairly ambiguous nature of the film’s closing scenes, The Operator would certainly seem the most logical character to shoulder a follow-up. Anyone who can snap off her own partially severed ring finger with such ennui is a warrior woman that’ll simply be impossible to ignore in a solo outing. If “The Night Comes for Us” is set to continue with a spin-off focused on The Operator, count KFK in!

Seen “The Night Comes for Us”;  what are your thoughts on the film’s intense, adrenaline-soaked rollercoaster ride of martial arts action?  What did you think of Julie Estelle’s portrayal of ‘The Operator’, and how will this pan out with her return in a spin-off? Let us know in the comments below; Like, share and join in the conversation on Facebook and follow us on Twitter & Instagram. (Click to OPERATE a FUniverse of news, exclusives, and subscribe for videos too!)