With an impactful career spanning over thirty years, Dejdamrong Sor Amnuaysirichoke, aka “Kru Rong” has captivated audiences with incredible endurance and striking prowess.

Born 7th November, 1978, the now 43 year-old Thai native began secretly training in Muay Thai, starting at the young age of 10, and by 17 was recruited by the Lookbanyai camp in Bangkok, a gym that was considered one of the best in the country.

In the prime of his career, Amnuaysirichoke became a three-time Lumpinee Stadium Champion, once at Light Flyweight and twice at Strawweight. 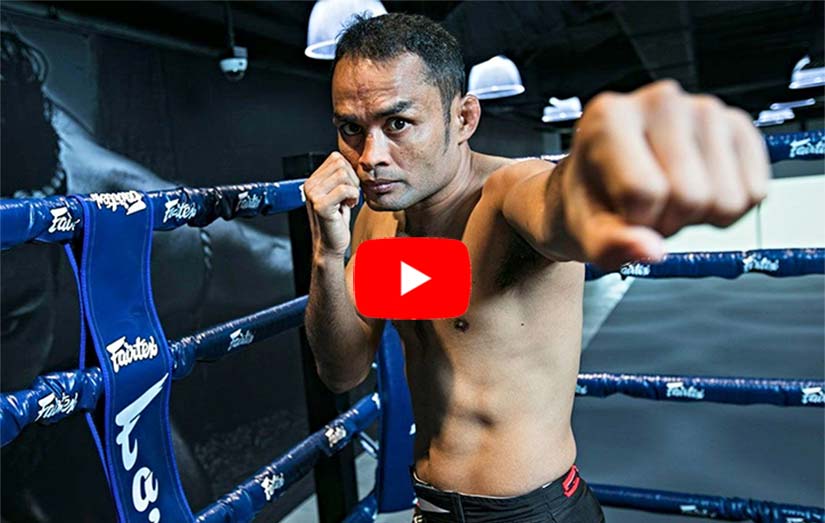 At the end of his career, it seemed like he had nothing else to prove, until he moved to the Evolve MMA gym in Singapore, where he not only became an instructor, but took up BJJ, before making the jump to MMA, becoming the first Thai to win an MMA world title.

He debuted at ONE Championship in 2014, where he claimed the inaugural Strawweight title at the age of 34.

In the eight years of his MMA career, Amnuaysirichoke continued to show incredible resilience into his forties thanks to his technical approach, until hanging up the gloves in February 2022, leaving behind an undisputed legacy.

Now, with all that covered, let’s roll out the highlight reel of Dejdamrong Sor Amnuaysirichoke’s Top 5 MMA Finishes! (in descending order)

For Dejdamrong and his opponent, Jomanz Omanz, this match marked not only the debut of their MMA careers, but also for ONE Championship.

Within 10 seconds of round 1, Dejdamrong landed the first blow with a thunderous leg kick.

Demonstrating incredible reflexes, Dejdamrong evaded an overhand from Omanz, and knocked him down with a right-hand counter.

As Omanz proceeded to get up, Dejdamrong met him with a soccer kick to the head and followed his prey with knees to the body, even striking with a head kick, pressuring Omanz against the cage where he could display some more punishing blows.

Looking to break away from Dejdamrong’s counter strikes, Omanz shot for the leg, scoring the takedown.

As soon as the referee brought the two warriors to their feet, Omanz caught Dejdamrong’s leg kick, countering with his second takedown of the fight.

Resuming their stand-up, Dejdamrong defended Omanz’s takedown with hammer fists and elbows to the head, defending another shoot before transitioning into full guard.

With Omanz’s face against the canvas, Dejdamrong thrust his knees onto his opponent’s head, prompting the referee to step in at 4:33 of round 1, declaring Dejdamrong the winner via TKO.

Nearly a year after getting knocked out by Jeremy “The Jaguar” Miado, Dejdamrong was given another crack at the young Filipino native.

Earlier in round 1, Dejdamrong threw a leg kick, but was caught by Miado who landed his own kick to the leg. Dejdamrong’s second leg kick was once again caught and met with a right hand.

The fight continued with both warriors landing significant blows. “Kru Rong” found success with his leg kicks, but it was Miado leading the dance with his reach advantage, scoring more strikes to the head with Dejdamrong getting rocked by a right cross.

When the two strikers returned to stand-up, Dejdamrong concluded round 1 landing more kicks to the leg and body. Despite being at a disadvantage, Dejdamrong broke through Miado’s reach, landing a right hand to the head.

After landing a further right hand, Dejdamrong absorbed a knee to the body. Then, soon after, as Miado caught Dejdamrong’s kick for a takedown, “Kru Rong” defended the attempt and unleashed a flurry of knees to the head.

The fight was stopped at 2:38 of round 2, with the former champion being declared the winner via TKO.

A year after losing his title, “Kru Rong” was set to face twenty seven year-old Robin “The Ilonggo” Catalan who was carrying a 6-3 record.

In round 1, Catalan landed the first leg kick, but was unsuccessful with a takedown attempt.

When it seemed like the former champion could defend Catalan’s single leg, “The Ilonggo” proceeded to pick up the Thai legend, bringing him down for a spectacular slam, yet found himself caught in a crucifix position with both arms wrapped up by Dejdamrong.

After breaking the crucifix, Catalan transitioned into side control. Dejdamrong was at the mercy of Catalan as he gained his back for a submission hold. The veteran broke free from the position and greeted Catalan with a knee to the body.

As both warriors scored a body kick, Catalan landed a left hook and caught Dejdamrong’s kick, scoring his second takedown.

As Dejdamrong succeeded in freeing himself from a heel hook, he locked Catalan into the clinch and proceeded to thrust unforgiving knees to his body and head, before the end of round 1.

Beginning his comeback in round 2, Dejdamrong surprised Catalan by leaping in with a knee strike.

With the young Filipino fighter in his clutches, “Kru Rong” proceeded to unload with ferocious knees and elbows.

It wasn’t until a right hand from “Kru Rong” dropped Catalan, that the referee decided that he had seen enough. He ended the contest at 46 seconds of round 2 giving  Dejdamrong the win via TKO (knees).

Starting round 1, Dejdamrong kept Imran in check with his trademark leg kicks while throwing additional kicks to his body and head.

For every attempt at landing a shot, Imran was on the receiving end of Dejdamrong’s retaliation, yet he managed to score a takedown before the end of round 1.

Dejdamrong continued round 2 with roaring leg and body kicks, yet Imran managed to return a leg kick and a left hand.

The former champion absorbed a few jabs from “The Spider”, but launched a round kick, landing on the head.

After landing a knee strike to the body, Dejdamrong defended a takedown attempt, before planting a knee to the head.

Imran scored a second takedown, but Dejdamrong got back to his feet, scoring more strikes to end round 2.

Looking to close the curtain in round 3, Dejdamrong continued the pressure with his kicks and knees, even rocking Imran with a right hand.

The show was over when “Kru Rong” caught “The Spider” in the clinch, ending the contest with knees and elbows. The striking veteran earned the TKO victory at 1:21 of round 3.

In round 1, Dejdamrong brandished his experience by landing a leg kick, evading Banma’s left hand and scoring a left hook to the jaw.

“Kru Rong” aimed for the clinch, but Banma freed himself, coming back with an offensive display of side kicks, whilst Dejdamrong returned the favour, landing a right hand.

Banma displayed a flashy double round kick, yet it was Dejdamrong’s leg kick that caused “Pretty Boy” to lose his balance momentarily.

“Kru Rong” found success with his leg kicks, while “Pretty Boy” threw an accidental low blow, stopping the contest for a few moments.

When the fight resumed, Banma became more aggressive, firing wild strikes to the head as Dejdamrong backed against the cage yet again.

Dejdamrong survived the storm and in spite of his limited reach, managed to land clean shots to his opponent’s leg, body and head before the end of round 1.

Following an accidental low blow this time from “Kru Rong”, round 2 resumed with Banma landing a side kick and Dejdamrong scoring a head kick and a right hand.

Despite being subjected to a takedown, the former champion finally caught the fledgling in the clinch, unleashing deadly elbows to the head and knees to the body.

“Pretty Boy” managed to break free, yet after a failed takedown attempt, Dejdamrong locked the clinch back on, resuming his fury, which prompted the referee to end the contest at 3:31 of round 2, giving Dejdamrong the win via TKO.

So, there you have it folks! 5 of Dejdamrong Sor Amnuaysirichoke’s best MMA finishes!

With a record of 12-7 with 7 KO’s and 3 submissions, which of Dejdamrong’s fights from the list above did you enjoy most? Who would Dejdamrong’s next ideal opponent be; and where would you rank him among the strawweight elites? Which fighter should we KFK next? Let us know in the comments below; Like, share and join in the conversation on Facebook and follow us on Twitter & Instagram!

AMP UP your striking prowess in KFK gear, and subscribe for more ESSENCE of “KRU RONG” FU on YouTube!

James’ passion for martial arts combat originated from his love of action cinema, inspiring him to practise the arts from a young age. He is trained in Muay Thai, Boxing, Wing Chun, Kali and Jiu-Jitsu. Through these practises he has not only reaped the benefits of learning technical skills, but also studied real-world survival techniques, with each discipline enriching his mental stamina and wellbeing. James is a movie buff and an MMA fan, engaging with the tactical skills and strategies of every fight.