Three American children, Ben, Teron, and Zoe are adopted into a Japanese family (Mike Iwanaga and his son Shiro) who are descendants of a samurai who survived the famous Satsuma Rebellion led by one of Japan’s Last Samurai, Saigō Takamori.

Now living in present-day Chicago, they are attacked by a Yakuza gang led by the daughter of a vicious oyabun (leader) Tomoe Yamada looking to collect their heads for collection to be stored as artefacts. Along the way, old conflicts resurface threatening to estrange the family once again, through which they will have to become a fighting unit in order to survive.

The Yakuza poised to fight

If John Woo did graphic novels.. 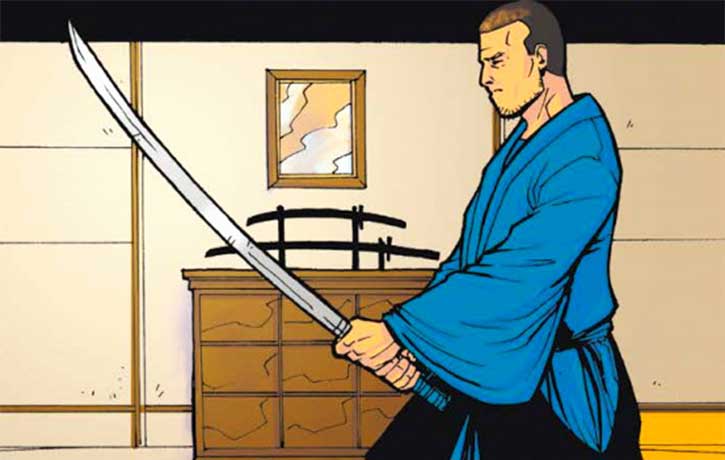 If you flick through this book and sigh at the lack of action in “Children of Saigo” then chances are you flicked too fast; there are plenty of great moments skilfully illustrated such as Ben pinning policeman Solomon to the coffee table in the beginning, taking on a group of Yakuza thugs with some carefully hidden throwing knives, and the fireball finale straight out of John Woo’s “The Killer”.

In between, what you have is a story of family, honour, ancestry and tradition, and an evil villainess who, like the Queen of Hearts in “Alice in Wonderland”, has a decapitation fetish. Tomoe Yamada, though is far from a comical character, but a decidedly deadly narcissist and as the villain of the story, as always, is the most interesting character. This is not to take anything away from the other main characters, principally the Iwanaga clan , but like any other action tale, the villain steals the show, and Tomoe is no exception.

The somewhat estranged and dysfunctional relationship between the Iwanagas binds the story and avoids cliche where possible. The relationships within the family, as well as Ben’s ties to his father’s partner, and his family, the Tedescos, add to the emotional stakes of the plot. Characters like these are the making of this kind of story which elevate it to another level.  Jeffers takes the time develop the characters and gives them stakes not just in terms of life and death but also family honour and love. At one point you become emotionally invested enough in the characters that when some are killed off (no spoilers) it hits like a straight punch or yari (spear) strike to the chest.

Guns are no match for a swift blade

Shiro sweeps through the enemy

As mentioned before there is just the right amount of action for those keen to see this young Samurai in action culminating in a showdown with plenty of gun-fu, sword play, an assortment of other weaponry along with hand-to-hand fist and feet fu. Morales’ captivating artwork really stuns in these moments, so perfectly storyboarded that you end up spontaneously playing out the action in your head as if it were jumping out of the page.

Familiar territory this may be, with similar stories and common themes, however “Children of Saigo” is a fascinatingly entertaining read. The story of the dysfunctional family splits and background add meat to the story’s bones and the relationship between the siblings is a heart-warming one to follow. Writer Jeffers, influences stand out like a Yakuza member’s dismembered pinky – take every film or book where a non-Japanese is influenced by Japanese -Budo in particular- culture and it conjures up (see trivia below) an assortment of tales  including “The Yakuza”, “The Challenge” and of course “Kill Bill”. This not a bad thing, as Jeffers has created some great characters who carry the story to its bloody end.

With likeable characters, doses of bloody Manga-esque samurai-fu, and a solid, familiar storyline as soothing as a comfort blanket, “Children of Saigo” is a  compelling, riveting read, adeptly written with some intricately colourful artwork – worthy of any graphic novel collection.

Ben finds himself up against it

Teron calls the shots in battle

Ben finds himself on the thin edge

Have you read “Children of Saigo”, what did you think of the contemporary story blended with a samurai action theme? What’s your favourite fighting comic ever? Let us know in the comments below; Like, share and join in the conversation on Facebook and follow us on Twitter & Instagram. (Books and t-shirts make great Xmas gifts for the martial arts fan in your life, stay tuned to KFK’s newsfeed, get yourself all FUelled-up and subscribe for videos too!)

Once Upon a Time in China Trilogy — Blu-ray Box Set Competition!