After more than a decade since 2010’s “Icarus”, action legend Dolph Lundgren takes up the director’s mantle in this race-against-time action thriller, starring alongside British action superstar, Scott Adkins.

“Castle Falls” is one of Lundgren’s more grounded roles, the sort of role his partner in crime, Scott Adkins, seems right at home with given his recent works such as “Avengement” and “The Debt Collector” films.

With this dynamic duo of action cinema paired together, the clock is set and expectations are high, but can this duet deliver the action entertainment goods with Dolph in the driving seat? Follow on to find out…!

“Castle Falls” releases in US theaters, as well as via Video On Demand today; December 3rd, 2021 courtesy of Shout! Studios.

Scott Adkins stars as Mike Wade, an MMA fighter – whose shoulder injury effectively ended his career – now finds himself down on his luck. Dolph Lundgren plays prison guard Richard Ericson whose daughter’s cancer threatens to advance but he needs money to afford the extortionate treatment costs.

Stunt veteran, Scott Hunter, plays Deacon Glass who assembles a team of henchmen that includes his girlfriend Kat, played by Kim DeLonghi, to search the derelict ‘Castle Heights’ hospital for his brother’s 3-million dollar stash hidden in the building.

After decades’ of neglect, Castle Heights hospital is ready to be demolished. No one knows that a gang leader, now in prison, hid 3 million dollars in cash he stole from his rivals inside the abandoned building.

Now, three desperate parties want the money – a blue collared ex-fighter, Mike Wade, who finds it while working as part of the demolition crew, prison guard Richard Ericson who’s willing to do anything to pay for his daughter’s cancer treatment, and a ruthless gang led by Deacon Glass, who claim to be the rightful owners. 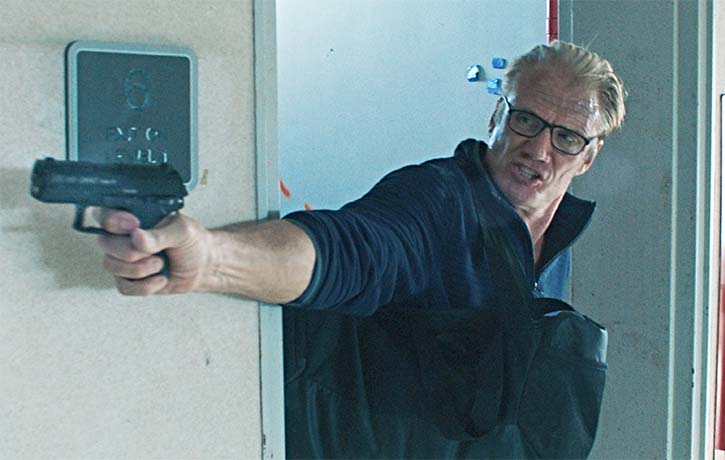 The demolition charges are set, everyone clears out and Castle Heights is set to fall in 90 minutes flat. The clock is ticking…but who will take the cash and get out alive?

Good, on-demand entertainment knows it’s worth dispensing with too much over-reaching to keep things simple, yet effective.

Tim Man Back on the Fight Choreography…

It opens with a tete-a-tete matchup between Adkins and actor/stunt performer Evan Dane Taylor, and whilst we’ve seen this sort of thing before, it does give a little bit of heartbreaking dramatic moment where Adkins’ character comes to the painful realization that maybe he’s too old for the fight game.

Mike Wade fires on all cylinders in Castle Falls 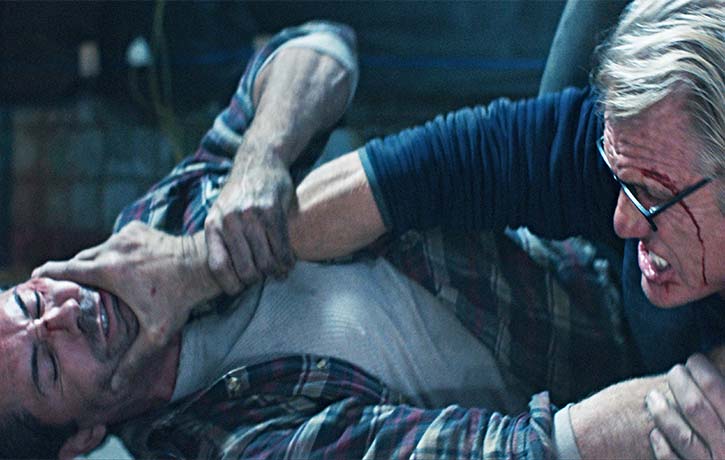 Things get tense between Ericson and Wade

From there, the pace slows somewhat for much scene setting and character establishment which takes up much of the film’s first half.

The emotional component is set up with some subtext of bloating healthcare costs and political opportunism – the crippling cost of Ericson’s daughters’ cancer treatments is another of the film’s heartbreaking moments giving us a potential career best performance from Lundgren as a distraught father.

If you feel the slow set up runs the risk of losing viewer attention, fear not! The build up is cleverly broken up into mini-chapters with title cards, giving us just enough backstory as we learn more about the characters’ motivations and what drives them.

Ericson’s story is compelling, and while Mike’s story sees him as beleaguered and hoping to get lucky, the push behind his character escalates when tragedy strikes at the hands of the gun-wielding henchmen.

With the emotional content established and the three parties gathered at the condemned Castle Heights, it’s all fists, kicks and ballistics from here on in, with Tim Man’s intricate choreography kicking up the action pace into high gear.

We have explosion with Scott Adkins

The ticking clock that appears intermittently reminds us of the impending explosive deadline adding some nail-biting tension.

Wade and Ericson are at first on opposing sides delaying the goals and escape plans. This leads to the inevitable Adkins/Lundgren beatdown we’ve really been waiting for, a mix of no-nonsense, street-style combat and some martial action.

Though at times his age shows, Lundgren moves like a warrior not to be messed with and still has the towering presence we first saw, with jaws dropped, in “Rocky IV”.

Adkins’ more grounded fight choreography, sans his acrobatic tricking, are suited to his character of an aging fighter, but still shows off enough speed and agility, probably indicative of a burned-out fighter who has finally found something worth fighting for. 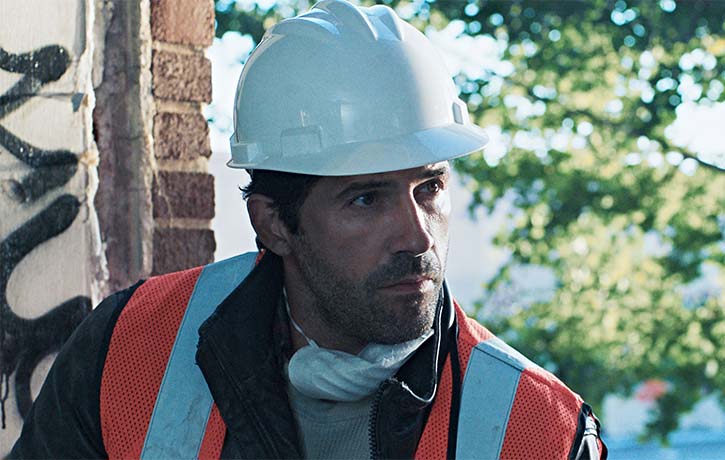 A plan is coming together 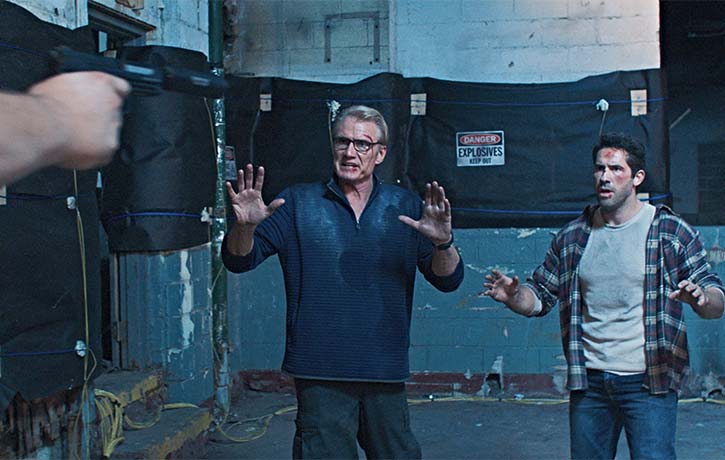 Ericson and Wade find themselves in a disarming situation

More action comes thick and fast as Adkins takes on co-star/stunt performer Jean-Claude Leuyer, who plays one of Deacon’s henchmen in one scene, and later on, in an intense rooftop fight with Deacon Glass.

Scott Hunter is clearly a skilled martial artist and provides Adkins with an equal matchup in a tense fight packed with lots of technically rich MMA.

This is possibly the film’s longest fight and with the two so equally matched – though Glass certainly seems more determined – at one point you’re really not sure who will be victorious. This unpredictable feel adds to the bookended edgy action feel and emotional drama that leads to an ultimately surprising, yet satisfying finish.

“Castle Falls” is a simple, story-driven action thriller that wears its heart on the sleeve of its gritty setting.

Andrew Knauer’s script not only wants you to know who the good guys are but also to follow their journey and effectively be the cheering section in their corner at the finale. This effectively lifts it above your average action flick. It is well-paced and though leaves you aching for the action to kick in sooner during the first half, when it finally does, there is plenty to enjoy.

The film is clearly low budget and offers nothing remarkably new, what it delivers is solid entertainment, thrilling action and with the almost real-time setting against a ticking clock, some nail-biting tension broken up with some comic moments.

The performances from both Adkins and Lundgren are applaudable, packed with emotion, while providing enough bone-crunching beatdowns, and shoot-outs to keep action fans happy.

Ericson out on a ledge

“Castle Falls” releases in US theaters, as well as via Digital On Demand today; December 3rd, 2021 courtesy of Shout! Studio, and is also available on December 28th on DVD and Blu-ray via Amazon!

DON’T GET TRAPPED IN “FALLING CASTLES”! Escape into the KINGDOM of FU, and check out our interview with the action icon himself, Dolph Lundgren discussing his work with Sylvester Stallone on “Rocky IV”, as well as “Castle Falls”!