Into the Badlands: Season Two – Episode 10

It’s been a wild adventure to say the least, but after ten thrilling, action-packed episodes, the second season of AMC’s hit series “Into the Badlands” has finally reached its summit. Fear not, however – the series will return to AMC to set the bar for action on the small screen once more in a sixteen-episode third season, the longest season to date on a show that has only grown more expansive with both seasons thus far. As the world waits to venture into the post-apocalyptic warzone of Clippers and Barons once more, it’s time to look back on season two overall. So, ready yourselves, readers, here’s our review of the second season’s final episode and season two recap!

When we last left our anti-hero Sunny, he was a man on a mission. The only thoughts on his mind are rescuing his girlfriend Veil, played by Madeline Mantock, and their new born son from the bloodthirsty Baron Quinn, played by Marton Csokas, and bringing down his former Baron once and for all. Meanwhile, Sunny’s young Colt M.K., played by Aramis Knight, has finally been captured by the duplicitous Baron, The Widow, played by Emily Beecham, who’s eager to re-awaken his supernatural abilities to bring down her rival Barons. However, The Widow’s daughter and former trusted Clipper, Tilda, played by Ally Ioannides, manages to break free of her entrapment in her mother’s dungeon and sets off with her intimate ally Odessa, played by Maddison Jaizani, while Bajie, played by Nick Frost, comes to the aid of Sunny in his quest for vengeance against Quinn.

Sunny keeps his guard up for the next attack

Sunny and Bajie join forces to bring Quinn down

The finale of season two could almost be perfectly divided into nothing but build-up in its first half, and nothing but action in its second. Sunny’s final confrontation with Quinn along with Tilda’s plot to put a stop to her mother’s machinations give the season’s climax an almost slingshot-like momentum, with the latter half blasting off like a bat out of hell. The finale also lays plenty of groundwork for season three, mainly in the form of The Widow now finally having M.K. in her clutches and her plot to re-awaken her inert metaphysical gift to finally conquer the Badlands. The direction the show will take in season three is also teased in the episode’s final scene, one which ends the season with a rare blend of closure and ambiguity not often seen in episodic storytelling.

The latter half of the season finale is wall-to-wall sword-slicing action and some of the goriest bloodshed seen in the series to date. It bears repeating how much “Into the Badlands” is testimony to AMC’s take-no-prisoners ethos when it comes to making sure that what you see is truly what you get on their original programming, and how much the gloves have come off from the 90’s when finely-tuned action sequences were torn to shreds to meet approved levels of televised acceptability. The makers of “Into the Badlands” have expended far too much blood, sweat and tears in crafting the series’ martial arts battles to perfection and aren’t about to let a single frame of it go unnoticed! 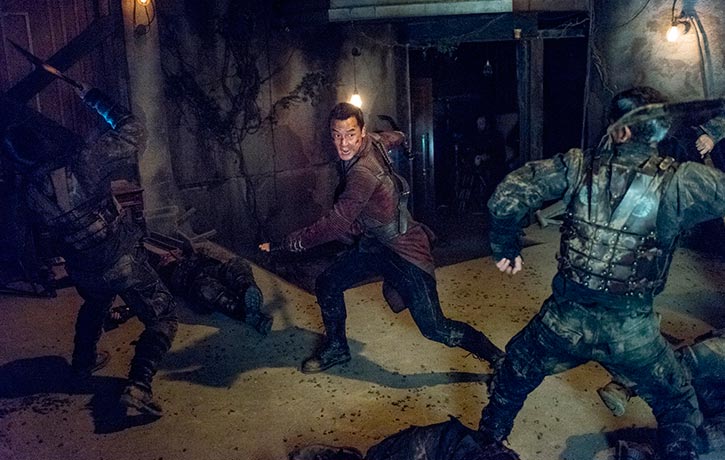 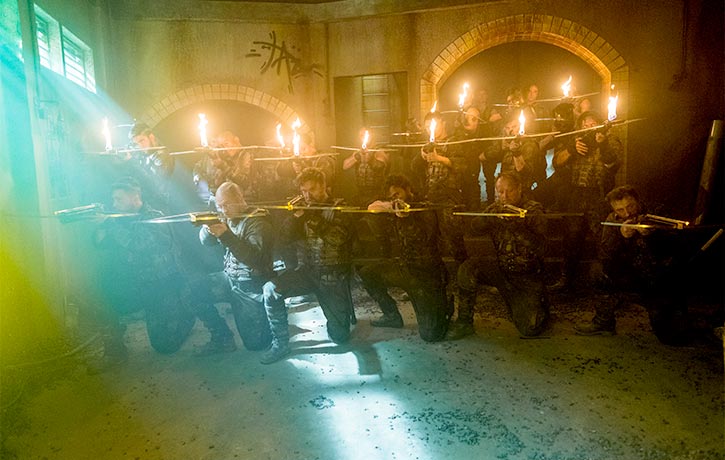 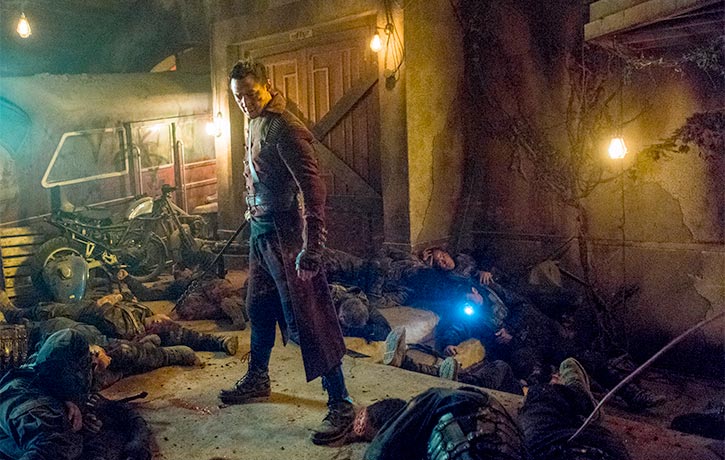 Sunny and Bajie cement their status as brothers-in-arms in a battle with Quinn’s bodyguards that rivals “Logan” for severed limbs and decapitations. This is also the moment where Bajie rises to the level of Sunny and The Widow for the strongest characters on the show. In a different series, Bajie might have been relegated to little more than Homer Simpson with a cocky accent, but he rises beyond simply being the show’s primary source of comic relief to being an indispensible ally to Sunny and a worthy combatant in his own right. He certainly does Bruce Lee proud wielding nunchakus against Quinn’s minions!

Of course, season two couldn’t end without Sunny and Quinn finally going mano-a-mano and the series doesn’t disappoint. Not to bring up another comparison to “The Raid”, but Quinn proves to be a villain akin to “Mad Dog” in the kind of injuries he can absorb and continue fighting unfazed. Like the first season, the final duel and with it the season finale, ends on a darker note than most shows, with enough loose ends left unresolved to pull the audience back in for the next season. However, season two also brings more resolution to its conclusion and is significantly more open-ended in where things can go in season three, even if you’re left with pretty sound expectations of certain elements to come when the series returns. 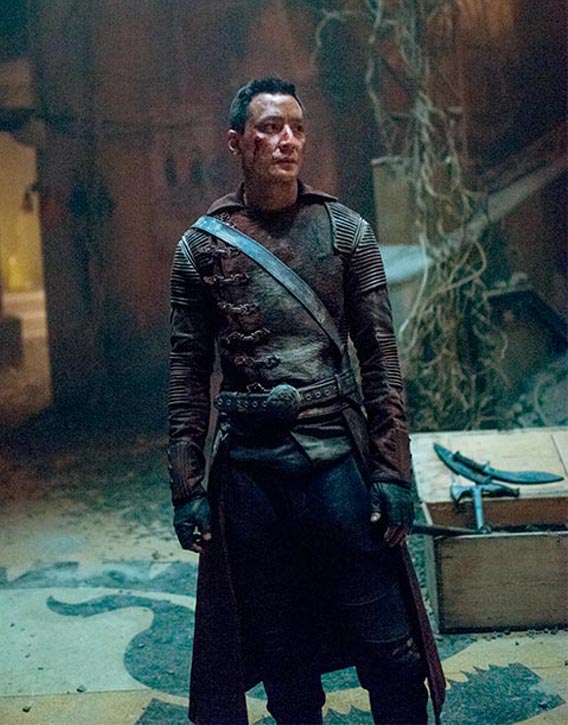 After the fuy of battle, Sunny stands undaunted

With two seasons in the can, “Into the Badlands” remains king of the hill for action and adventure on the tube. While season two is no less hardcore than the first, Nick Frost injects plenty of levity throughout and makes Bajie into a much stronger character than you might expect. By expanding the episode count, the show also expands its scope and scale considerably, and the villainous menace provided by The Abbotts is probably the closest you’ll ever get to seeing Shaolin Monks portrayed as bad guys. With such a stellar cast of martial artists, stunt people and fight choreographers, “Into the Badlands” is the place to be for some of the most meticulous martial arts action ever seen on the small screen – and after two amazing duels against Cung Le, one can only imagine the guest stars AMC plans to pit Sunny against in Season 3!