“Baaghi 3” is an exercise in the pinnacle of action movie insanity. On the ever-charismatic shoulders of Tiger Shroff, the movie is as overflowing with some of the year’s most insanely well-orchestrated action sequences, while also happening to be the most utterly absurd action movie in several years, Bollywood-made or otherwise.

That both of these things are equally true simultaneously only goes to show that, by whatever metric one chooses to measure it by, “Baaghi 3” gets the job done as another notch on India’s action movie belt, albeit in the most cartoonish way imaginable…!

When their father passed away, Ronnie Chaturvedi swore an oath to protect his brother Vikram no matter what. However, Ronnie’s habit of overreacting to any grievance directed at his brother, along with Vikram’s reluctance to ever stick up for himself, leads Ronnie to encourage Vikram to join the local police force like their father.

However, Vikram remains as timid as ever, leading Ronnie to operate as his secret enforcer, doing the heavy lifting whenever his brother gets into violent situations, allowing Vikram to take the credit and rise up in the police ranks.

However, when Vikram’s promotions see him sent on a mission to Syria, he finds himself in way over his head when he’s kidnapped by ISIS forces in the country, leading Ronnie and his girlfriend Siya to head into Syria to rescue Vikram.

There’s no more fitting a way to describe “Baaghi 3” than as a cartoon.

Although the movie gives a brief glimpse of Ronnie defending Vikram from schoolyard bullies as children, the movie really sets the table for what’s to come when Ronnie comes to Vikram’s defense in a movie theater lobby.

In the most over-the-stop, utterly absurd overreaction possible, Ronnie pummels his brother’s aggressors within an inch of their lives when one of them draws the tiniest bit of blood from Vikram after smacking him – and that isn’t even the most outlandish aspect of the opening set piece.

That distinction goes to what precedes it, when Vikram calls out his brother’s name, Ronnie clearly hears him from inside the crowded auditorium, and sprints his brother’s defense, the camera lingering on his jacked biceps as he does so.

This sets the stage for the entire first half of the movie, essentially a rinse-wash-repeat of Vikram getting into trouble, Ronnie running to the rescue and single-handedly saving the day. At one point, Ronnie even feigns genuine terror after seemingly finding himself at the mercy of his opponents in a junkyard, mostly just because he can, followed by Ronnie casually defeating his enemies so thoroughly as to cause stacks of cars to collapse as he casually strolls away caressing his hair.

Add in Ronnie’s at-first antagonistic relationship with Siya and her sister Ruchi, and “Baaghi 3” is the Bollywood equivalent of an episode of “Johnny Bravo” (but don’t take our word for it). 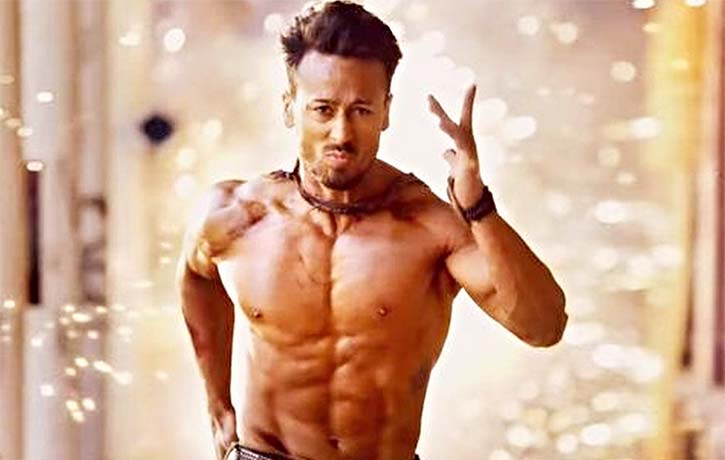 Ronnie and Siya arrive to search for Vikram

The second half following Vikram’s kidnapping in Syria is where “Baaghi 3” starts to level off in its absurdity. While the first movie culminated in a Bollywood version of “The Raid“, “Baaghi 3” hews closer to the “Rambo“-esque one-man army climax of “Baaghi 2“, with Ronnie single-handedly taking out helicopters, tanks, and ground troops in a final battle that’s equal parts “300”, “Captain America”, and “Wolf Warrior II“.

The wacky tonal excess of the first half shifts into an absolutely glorious sizzle reel of explosions, gunplay, and martial arts, and is by itself well worth the ticket price. It also gives Vikram his only real moment of genuine physicality in the whole movie and does it in a way that feels like something the movie has built towards without the audience realizing it.

Considering the preceding two hours consist largely of Ronnie walking all over anyone who dares so much as shortchange his brother at a toll booth, it’s nice to see “Baaghi 3” finally throw Vikram a bone.

In the middle of a warzone sing and dance

“Baaghi 3” is the kind of action movie where you need to know what you’re getting before seeing it. While shorter on the genuinely breathtaking Kalari action of “Baaghi”, it runs closer to the explosion-filled super-soldier premise of “Baaghi 2” with Tiger Shroff once more carrying the movie admirably, while showering the movie with a tone right out of “Looney Tunes”, and making clear that the Ronnie of each movie is an archetype more than a singular hero carried over from each movie.

If you’re coming for the fireworks, know that “Baaghi 3” brings all that and much more home with a very generous helping of cheese along the way.

Vikrams not gonna take it anymore

Ronnie to the rescue

Ronnie arrives with both barrels blazing

Have you seen “Baaghi 3”, what are your thoughts on the film’s amazing action and stunts and even its goofy tone? What are some of your favourite fight scenes from Bollywood (and we haven’t even started talking about ‘Tollywood’!) action epics of late, especially those starring legit, lifelong martial arts’ practitioners? Let us know in the comments below; Like, share and join in the conversation with us on Facebook and follow us on Twitter & Instagram.

TIGERS in TRAINING, whether it’s Hollywood or Bollywood, (or even Tollywood) fight action you want, get it right here; in the FUniverse of movie reviews, Top 10’s, Top 5’s, exclusive interviews, activate beast mode in your own KFK gear, and subscribe on YouTube for more insane fight action from East and West!