This 2003 documentary follows Mixed Martial Arts (MMA) pioneer and former American collegiate wrestling champion Mark Kerr through his fighting journey.  Spanning a 5-year period from 1998, the film paints a fascinating, if grim picture of the early days of professional MMA and charts Kerr’s darkest hours as he battles personal problems outside of the ring.

Mark Kerr is the main subject of the documentary, and makes for an interesting vehicle to introduce MMA to a wider audience.  He is softly spoken, kind-hearted and emotionally fragile.  The juxtaposition between his out-of-ring persona and the brutality and violence which characterizes his MMA fights makes for a fascinating dichotomy and one that is expertly explored throughout “The Smashing Machine”.

Mark Coleman is another former amateur wrestler who has made the transition to MMA and is Kerr’s closest friend.  His story is also told, in part and he acts as the yin to Kerr’s yang.  More emotionally stable, Coleman has a more straightforward approach to fighting and must support his growing middle-class family by performing in the ring.

Those that have followed MMA since the 1990’s will recognize Bas Rutten, an MMA legend and former UFC heavyweight champion.  Bas’s unique personality acts as moral guidance for Kerr who is recovering from his previous descent into drug addiction.  Bas’s training is world class, and he is able to ensure Kerr works on all aspects of his MMA game, whilst ensuring Kerr doesn’t become distracted by personal issues.

Mark Kerr, as a former American Collegiate champion, discovers an outlet for his grappling talent in the form of bare-knuckle, no-rules fighting in the mid-1990’s. In competitions that were an early iteration of what we know today as MMA, Kerr realizes quickly that, by utilizing his wrestling, he can physically dominate more skilled strikers.

However, the documentary introduces Kerr in a doctor’s waiting room, where he is attempting to get a prescription pain medication.  This beautifully sets up the two key and divergent storylines of the film:  Kerr’s personal failings and his wild success in Japan’s own MMA competition, the Pride Fighting Championship. 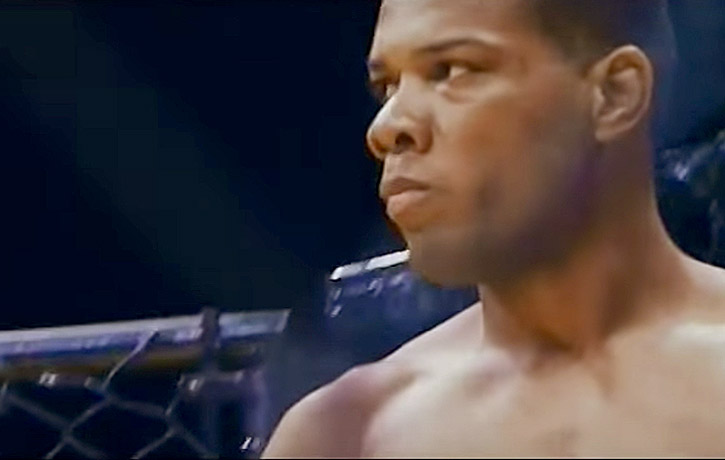 Kerrs lazer focus was impressive and intimidating for many opponents

Kerr’s early success in MMA continues overseas, where he is able to amass an 11-0 record, however his burgeoning addiction to pain medication and tumultuous relationship with his long-term partner lead to a lackluster training camp, and a subsequent poor performance.  This acts as the trigger point whence his world comes crashing down, all of which is skillfully captured by director John Hyams

Being an MMA documentary, “The Smashing Machine” is not short on brutal and at times, difficult to watch full-contact fighting.  This film provides an excellent insight into how harsh MMA was prior to the implementation of the so-called “Unified Rules.” The Pride Fighting Championship was famous for now outlawed techniques and included knees to downed opponents and soccer kicks, all of which are featured in “The Smashing Machine”. 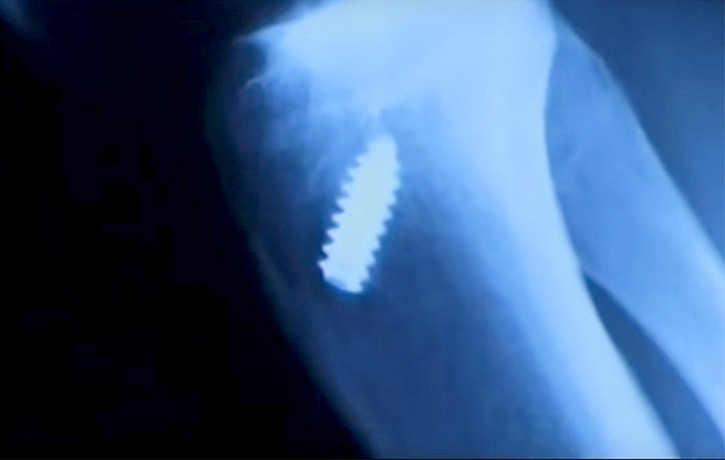 Kerr spent time on the treatment table after fights

Kerr’s early bouts in Brazil are also featured. Kerr, whilst possessing only rudimentary striking skills, is a wrestler par excellence.  Most of his early fights show him taking his opponents down with ease and utilizing floor strikes to force a referee stoppage.  Kerr was famous in these bouts for his expert use of the head butt whilst on top of an adversary, however this move was later outlawed.

As Kerr progresses to Japan and the Pride Fighting Championship, his game improves, and he is able to utilize more effective striking techniques.  This is particularly evident in the fight against Enson Inoue, where he was able to pull off a career defining win. Also featured are Kerr’s famous training sessions with MMA legend Bas Rutten.  Here, we gain insight into the basics of martial arts training and the difficulties faced during camp.  Bas’s outgoing personality and commentary is a highlight and will be enjoyed by any long-term MMA fan.

Injuries are common and risks high in MMA

The Smashing Machine highlights the brutality of MMA 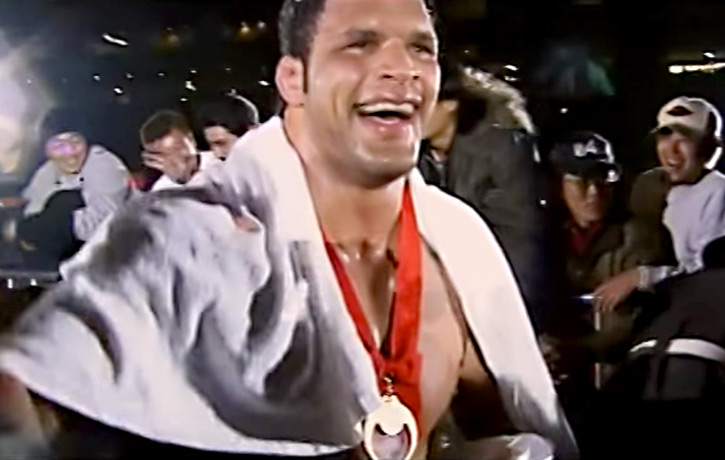 Kerr was a favourite in Japans Pride Fighting Championships

Kerr’s personal problems are also well documented in an open, straightforward manner, which may be confronting to the viewer.  Kerr is exceedingly candid about his drug addiction, particularly to pain medication and allows Hyams to film him injecting opiate based analgesics.  To see an elite sports star and the man who, at the time, was considered the best MMA fighter in the world, injecting drugs in between fights elicits a surreal feeling, and served to show just how far Kerr’s addiction had progressed.  His relationship with his partner is also a source of angst, which adds to the complex dynamic of Kerr’s situation.

“The Smashing Machine” is more complex than any other MMA documentary made before or after.  With plenty of fight action and brilliant behind the scenes footage, the film is a must for the MMA purest looking for a refreshingly revealing insight into the frontier days of this now mainstream sport.  However, as a biopic, “The Smashing Machine” has plenty to offer the casual viewer and John Hyams masterfully and matter-of-factly records the descent and subsequent recovery of an elite athlete from the thorny, bitter trappings of drug addiction.

Matt Ho is a physiotherapist and martial arts enthusiast, originally drawing inspirations from Jackie Chan’s "Police Story". Himself Asian he spent time in South-East Asia and possesses a deep appreciation for the culture. He trained in Karate briefly as a child and took up boxing six years ago training for fights in late 2015. He's had one amateur bout and several “smoker’” events. Matt now lives and trains in London, where he has also taken up Brazilian Jiu Jitsu with a goal of competing in MMA in the future. Matt also has a keen interest in the politics, matchmaking and economics behind professional MMA.