“Commando” from 1985, is a film with the I.Q. of a doorknob, and it also happens to be one of the most enjoyably exhilarating action movies of the Reagan-Thatcher era of unstoppable muscle men single-handedly obliterating literal armies of enemies. I bring this up, because “Commando” finds a curious kindred spirit in WWE Studios’ 2006 play for big screen glory, “The Marine”. Like “Commando”, “The Marine” is a movie that doesn’t have two brain cells to rub together…and like, “Commando”, that doesn’t matter in the slightest, given that the end result is a near-overdose of testosterone-fuelled, pro-wrestling-powered kick-ass entertainment!

WWE star John Cena makes his big screen debut in the role of former Marine John Triton, who finds himself caught in the middle of a jewellery heist orchestrated by crime boss Rome, played by Robert Patrick (you may remember him as the advanced version Terminator ‘T1000’ in “Terminator 2: Judgment Day”). Kelly Carlson steps into the role of John’s wife, Kate, while Rome’s equally vicious girlfriend Angela, is portrayed by Abigail Bianca. Rome’s cohorts in crime include Morgan, played by Anthony Ray Parker, Vescera, played by Damon Gibson, and Bennett, played by future “Arrow” star Manu Bennett. The gang of evildoers are able to stay ahead of local law enforcement, but Jerome Ehlers still gets into the thick of things in the role of Detective Van Buren.

John is having trouble adapting to civilian life

Bet you didnt see it comin

During an invasion of an Al-Qaeda stronghold in Iraq, U.S. Marine John Triton violates orders to wait for reinforcements to take out the terrorist encampment. Despite his heroic actions having lead to the successful rescue of a group of hostages being held captive by the terrorists, John’s disregard of protocol leads to his honorable discharge from the Marine Corps.

Following John’s difficulty in adjusting to civilian life, his lovely wife Kate decides that a vacation is in order for the couple. However, as they embark on their getaway, they unfortunately stop at the same gas station as the gang of criminal mastermind, Rome, on the run after committing a diamond heist. In the ensuing chaos with law enforcement in hot pursuit, Kate is kidnapped by Rome’s gang, forcing John to switch to Marine-mode in order to catch up to Rome and rescue Kate.

Stunned by sudden discharge from the Marines 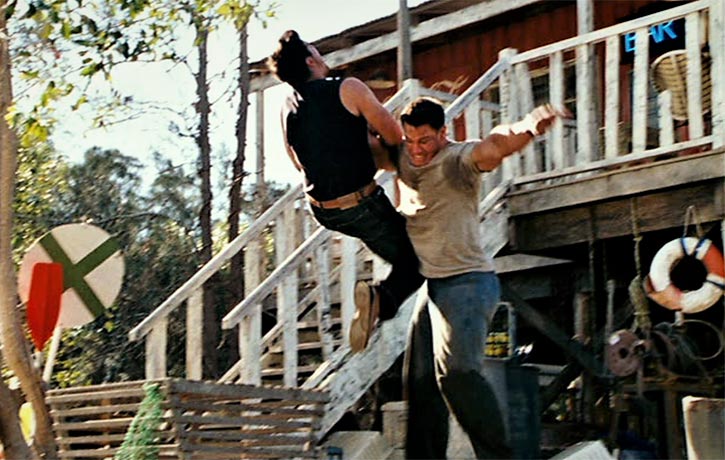 John chokeslams his enemy with authority

WWE Studios arguably doesn’t get enough credit for just how prolific a producer of action films its proven to be since its inception. Whether kickstarting The Rock’s rise to the mantle of the modern Schwarzenegger with “The Scorpion King” and “The Rundown”, or pitting Scott Adkins against Wade Barrett in “Eliminators“, WWE Studios really knows how to bring the razzle-dazzle action of its namesake to the big screen (2013’s underrated Halle Berry thriller “The Call” also shows that they can bring the magic to less testosterone-fuelled material, as well).

With “The Marine”, one can only assume that the film was crafted off of one of the most onomotopeaic movie scripts ever written, since there’s enough explosions in this movie to make the “Rambo” franchise look like a series of romantic comedies. “The Marine” wastes not a moment to deliver what it has to offer with the opening sequence of John blasting through the Al-Qaeda hideout with such ease that you almost feel sorry for the poor guys.

With his mountainous frame and the facial structure of an NFL quarterback, Cena is well-cast in the role, but his discharge after the film’s opening set piece also proves to be its biggest downside, as this is the only time we get to see John cammoed up as an active duty Marine, which is a bit of a shame – you’d swear from the opening action sequence that John Triton probably killed Osama bin Laden with a paperclip and the government’s just been covering it up ever since!

Epic dive from yet another explosion BOOM

John does a fire escape

“The Marine” doesn’t let up from the moment it gets rolling, and it doesn’t have a single concern on its mind other than hitting the viewer with one car chase, explosion, and pro-wrestling-inspired smackdown after another. While the editing of the fight sequences can be a little on the fast side, it has an appropriately WWE level of flashy roughness to it. (Side note from the heavy metal aficionado in me – Limp Bizkit’s “Break Stuff” would’ve made an absurdly appropriate soundtrack selection for John’s brawl with a group of unruly patrons while working a security job.)

From the second Kate is taken hostage in a car chase that must have consumed a third of the budget, the film is a virtual cavalcade of non-stop action. John’s skirmish with a duo of Rome’s associates really brings the pro-wrestling elements into the forefront with the combatants suplexing each other like crazy, with John even working in a helicopter kick before resuming his pursuit of Rome.

The warehouse finale also proves to be one of the better action sequences of Robert Patrick’s post-“Terminator 2” career, and it’s cognizant that Rome has an opportunity to pose a valid threat to the more physically imposing hero amid the extensive pyrotechnical mayhem around them (did I mention that this movie has a TON of explosions?).

With his supportive wife Kate

Dealing with an annoying obstacle while pursuing Rome

Nailing the enemy with a helicopter kick

Like “Commando” before it, “The Marine” knows what its audience has come for, and wants nothing more than to make dead certain that they’ve gotten their money’s worth. Its a big, dumb, body-slamming, fist-smashing, spontaneously combustible smackdown of Wrestlemania action heroics executed with the whole world gloriously bursting into flames around it. “The Marine” may not be a good movie, and it’s certainly not a smart one, but it’s damn sure an entertaining one!

Which movie starring a wrestler have you enjoyed the most so far, and which other wrestlers would you root for to feature in film? Let us know in the comments below, join in the conversation on Facebook and follow us on Twitter. (Be sure to check out our interview with wrestling champ Rob Van Dam, and if you like your music larger than life, our Top 10 wrestling entry themes!