The lighting is terrible. The sound mixing is garbage. The acting is atrocious. The fight sequences look like what someone with a cell phone and two weeks in a karate dojo would throw together in an hour. The editing is under the mistaken delusion that a three-time instant replay is needed for even the most marginally impressive morsel of action. In everything from directing to writing to simply making the events taking place on screen clearly visible to the viewer, 2003’s “The Black Ninja” is an utterly incompetent, barely intelligible, sloppily thrown together excuse for a motion picture, but does that mean it’s lacking in entertainment value? No siree Bob! In the annals of “So Bad, It’s Good” cinema, “The Black Ninja” is pure gold!

The role of the heroic Malik Ali aka ‘The Black Ninja’ is played by writer-director Clayton Prince, with Carla Brothers portraying Malik’s love interest, Dr. Tracey Allen, while Yuki Matsuzaki steps into the role of his arch rival Shinji Hagiwara aka ‘The Red Ninja’. Nicky DeMatteo plays the local Italian mob boss, Tony Fanelli, while David Gosnell serves more or less as the comic relief of the film in the form of cocky, dim-witted rapist Pooky Jenkins.

By day, Malik Ali is the most feared lawyer in Philadelphia, able to acquit even the most obviously guilty of defendants with remarkable ease. By night, he dons the mask and cape of the mysterious crime fighter known only as ‘The Black Ninja’. Years earlier, Malik had a moment of avarice and billed the bloodthirsty ninja assassin, Shinji Hagiwara $100,000 for his services. Hagiwara subsequently murdered Malik’s wife and children in response, leading Malik to don the garb of The Black Ninja to put a stop to the evildoers who fall through the cracks of the legal system. Malik soon finds himself with a shot at both revenge and redemption in protecting psychologist Dr. Tracey Allen, who witnesses a murder carried out by local mob boss Tony Fanelli, and whose entourage includes none other than Hagiwara himself. 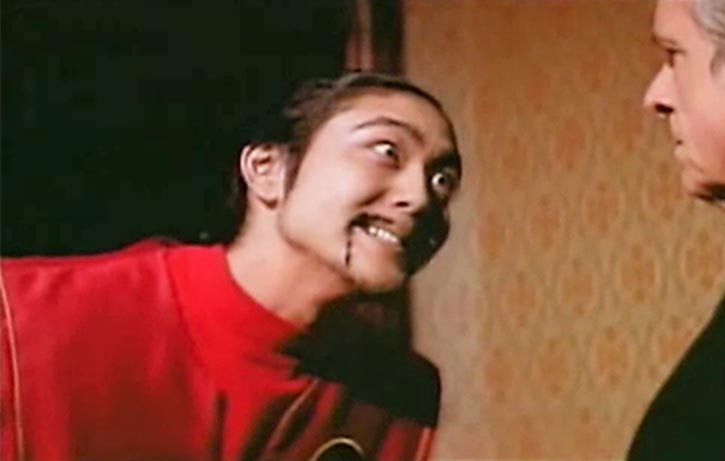 Hagiwara will not be spoken down to by Fanelli

The Black Ninja leaves Fanelli with a stern warning

When judging independent films, it goes without saying that you have to be willing to cut them a little slack when things like budgetary constraints become apparent. Not everything can boast the kind of bountiful resources thrown at the next “Star Wars” movie, but judging just from the film’s cinematography, if you want to call it that, you could probably get one “Blair Witch Project” for the price tag of about twelve “Black Ninjas”.

It’d be easier to commend Prince and co. for at least doing what they could with their evidently very limited resources, but the terrible camerawork is further hampered by lighting that can best be described as sporadic thus making the action on-screen much more difficult to see if it takes place outdoors and at night, which it frequently does. Furthermore, the equally crummy sound mixing, and ADR frequently makes the dialogue hard to decipher, an issue that ends up being further compounded in the case of Hagiwara due to Yuki Matsuzaki’s heavy Japanese accent. So yeah, on a technical level, “The Black Ninja” is an abysmal failure, but then, no one ever said a movie had to be good in order to be entertaining! 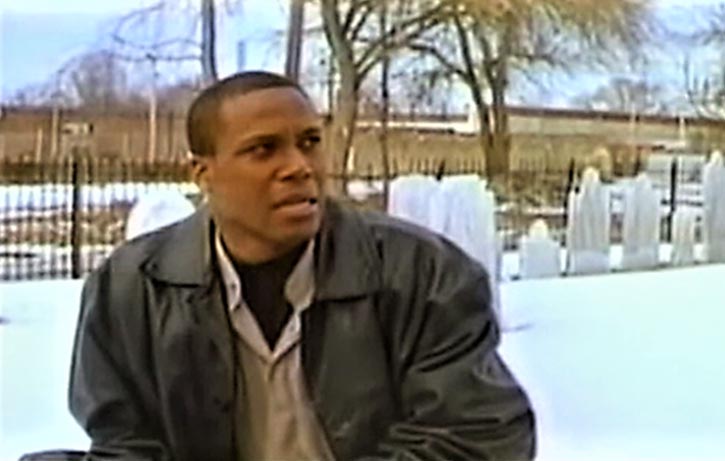 Malik feels guilty about the loss of his family 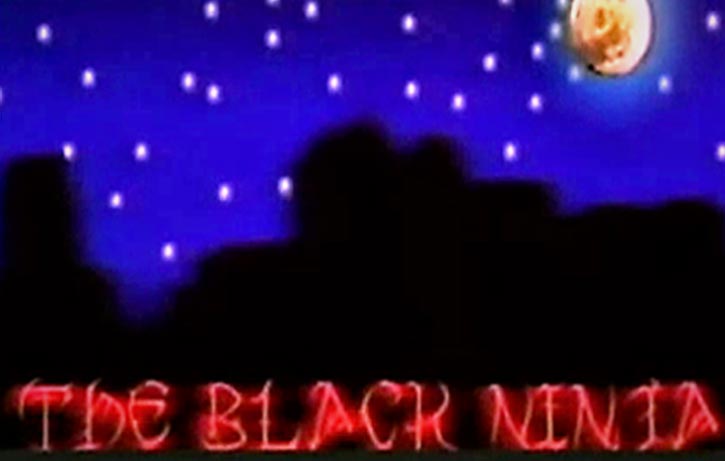 The Black Ninja captivates you right from the opening credits

The Black Ninja lands a kick on his enemy

Fanelli and his hechmen prepare their attack

Writer-director-star Clayton Prince is a veteran character actor and martial artist had previously made noteworthy appearances in 1988’s “Hairspray” the TV series “Dark Justice” and “The Cosby Show” (perhaps not an ideal credit to have on one’s IMDB page, in hindsight). To his credit, he at least turns in a solid performance of a grieving family man turned urban vigilante, but he’s acting in a completely different movie than his co-stars. Gosnell and Matsuzaki in particular clearly recognize the film for the home movie that it is and ham it up appropriately, while Nicky DeMatteo’s performance suggests he skimmed through clips of “The Godfather” before every take.

As a vigilante action film, “The Black Ninja” absolutely falls flat on its face. To call the entire premise derivative would be an understatement (a lawyer who becomes an urban ninja vigilante by night after experiencing a family tragedy? Shucks, what does THAT remind you of?!), and there are plot holes galore (Fanelli apparently wasn’t terribly concerned with committing his murder in a crowded video store, nor does he seem worried about any witness except Tracy) but worse still, every fight sequence in the film is laughably amateurish.

The Black Ninja knows just how to approach this situation

Hagiwara returns from Mailks past 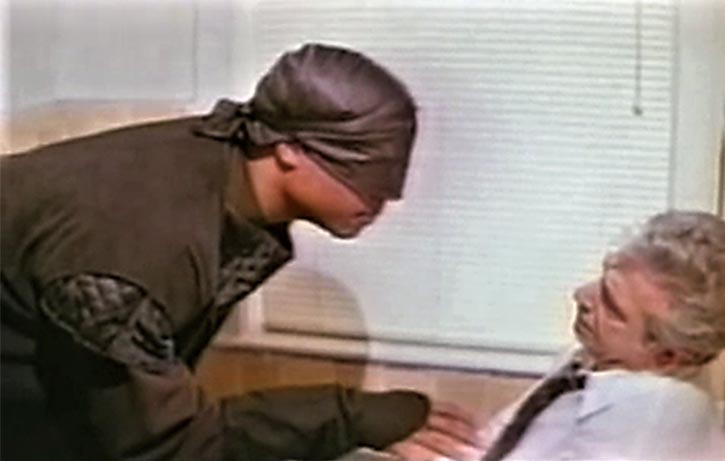 The Black Ninja has Fanelli cornered 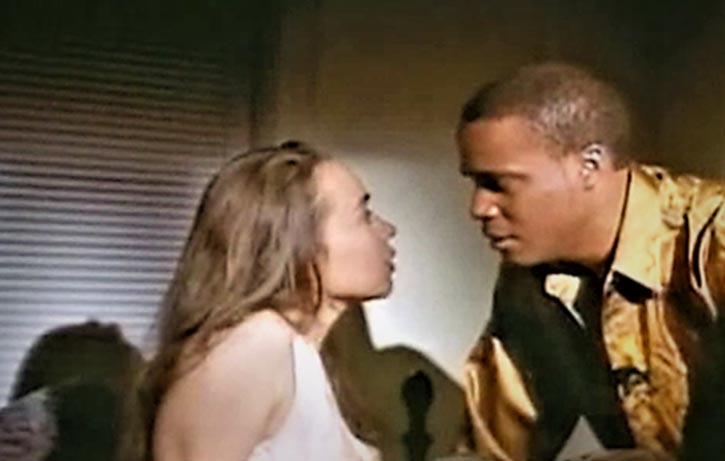 The film also seems to think that even the simplest fight moves like head butts and basic front kicks are impressive enough to warrant a thrice-repeated instant replay (2009’s “High Kick Girl” similarly overused this editing technique, but forgivably so simply for being in the service of FAR better fight sequences). If there’s an action highlight to be found in the film, it would probably be Malik fighting off a group of Fanelli’s hitmen in his home, throwing each of them out a second-story window one by one accompanied by the same yelling sound effect, while the sequence is capped off with Tracy’s SHOCKING realization that Malik is The Black Ninja due to the hero’s very sudden appearance in Malik’s home, hmm.

One brief skirmish with Malik and a Ninjutsu-trained henchman also works in some of the only solid action in the film, only for it to be cut far too short. Literally every other fight sequence in the film, and there are a lot of them, milk that instant-replay check dry to the point of unintentional hilarity. A sequence where Malik is forced to commit a jewelry heist by Hagiwara decides that the act of delivering a simple right cross to one security guard and a knee to the gut of another has enough of a “Wow!” factor to warrant a three-time action replay and in this day and age of meme-ing everything under the sun, it’s incredible that Malik head-butting Fanelli in the face three times in a row has yet to receive the GIF treatment.

The final showdown, such as it was, between Malik and Hagiwara is a flat and uninspired affair made thoroughly entertaining by that instant replay technique being employed for things from Malik taking a backfist to the face to a side kick from Hagiwara, as well as the arrival of a cop on the scene who, stunned to learn The Black Ninja’s true identity, gives a dubbed line reading worthy of “The Room” for the sheer enormity of terrible acting on display – seriously, this moment belongs in the same Hall of Fame as Johnny’s unforgettable moment on the roof!

The Black Ninja looks over his city

The Black Ninja is forced to commit a diamond heist

“The Black Ninja” is the kind of movie that “Mystery Science Theater” was made for. From the terrible acting to the trashy production values to the bumbling, three-peating martial arts sequences, not a single thing about the film works, yet by that very token, it’s a hellaciously entertaining unintentional comedy that belongs in the collection of any lover of “So Bad, It’s Good” cinema. Hey “Rifftrax” crew, let’s have a Live show for “The Black Ninja” in the immediate future please!

Seen “The Black Ninja”, what did you think? Let us know in the comments below, join in the conversation on Facebook and follow us on Twitter (and don’t forget to check out our previous movie reviews!)