After co-scripting the classic epics “Hero” and “House of Flying Daggers” with the renowned Zhang Yimou, Bin Wang goes solo with first time director Linshan Zhao for his take on this well-known controversial figure from China’s history.

Chow Yun Fat gives a career best performance as Cao Cao the imperial Chancellor and self-proclaimed Lord of Wei, a brutal yet fair leader burdened by the cost of his past actions, ambitious yet loyal to his puppet Emperor, Xian of Han played by Alec Su.

Lurking in the shadows waiting for the opportunity to kill Cao Cao are his concubine Lingju (Diao Chan) played by Yifei Liu, and court eunuch Mu Shun played by Japanese actor and model Hiroshi Tamaki.

Set in 198 BC during the time of China’s Three Kingdoms in the final years of the Han Dynasty, Chancellor Cao Cao has defeated one the country’s greatest warriors, put fear into all of the warlords and declared himself Lord of the state of Wei. Over the next twenty years, certain astrological signs predict a change that could bring about the end of the reigning dynasty. 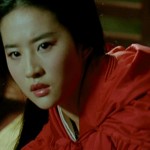 A coup is in effect

Whilst imperial advisors feel the Chancellor should obey the will of the heavens and unseat Emperor Xian, Cao refuses to betray his monarch even though he himself wields the power. Facing assassination attempts from within his own court and that of the emperor, Cao is unaware of two secret operatives in his court, his concubine Lingju, and eunuch Mu Shan both trained from a young age to kill him. The clandestine assassins wait in the wings as Cao struggles with the turmoil power plays within his kingdom.

For his debut, director Linshan Zhao generally steers away from stylised high flying action with only a handful of fights and battle scenes featured. The two main battle scenes, the assassination attempt on Cao at his mansion and the final showdown are lavish and action-packed featuring a veritable mix of blood and steel without being overly gore-laden. Writer Bin Wang’s nicely crafted character drama keeps the focus on the political machinations and treacherous plots.

The battle scenes and fight action have an epic feel with some brilliantly staged sword and spear fights as well as some breath-taking wire fu, the hallmarks of quality wuxia. The attack on Cao’s mansion is particularly thrilling with black clad killers scuttling up walls like insects, firing rope from grappling guns creating a net which they gracefully sprint across. However as exciting and action packed as this is coupled with the intriguing plot, one is left wanting more and having to wait until the finale. As all the sides come together clashing steel against steel with tension-packed sword fights, there’s one particular dramatic moment when Cao appears from an opening staircase. Whilst it doesn’t quite have the action grace displayed earlier, the interweaving and resolution of the film’s plot threads steeped in tragedy carry over into the fighting adding dramatic gravitas to an exhilarating battle.

Cao takes care of a traitor

Lingju moves in for the kill

Mu Shan moves in for the kill

Energetic battles, lavish sets, costumes and a plot with more twists than a corkscrew, this is very much Chow Yun Fat’s film with the actor dominating pretty much every scene -even when he’s not on screen. He attacks the role of Cao Cao with great relish and solid commitment and delivers a career-best performance, portraying a magnetic-yet-flawed man ruthless yet burdened with incredible weight on his shoulders. Although Fat dominates the story, his co-players do turn in emotionally-packed performances of their own; Alec Su is convincing as the weak and easily manipulated Emperor Xian, and both Yifie Liu and Hiroshi Tamaki pull off the tragic romance of Lingju and Mu Shun.

Aside from the underdeveloped romance and the need for a bit more action, “The Assassins” is a worthy addition to the long line of Chinese historic epics. Linshan Zhao’s directorial debut is impressive; a film maker who has an eye for style and setting. He draws from his star Chow Yun Fat a stellar and charismatic performance who brilliantly conveys the complex mix of a hard-nosed power player and weary warlord with noble intentions.

The traitors make themselves known

Blood and steel mix in the final fight

Cao fends off another attack

Fending off yet another attack

The film’s Machiavellian plot threads stitched together by Bin Wang’s sharp script and steeped in historical intrigue is fascinating and filled with drama. The action is authentically staged, brutal at times, packed with tense stand offs and battle scenes that are both gripping and stylish.

Transforming the body of an Avenger!

Accessories
Login area
About Us