“Sword of the Assassin” features an all-Vietnamese cast.

Set in ancient Vietnam, Young Nguyen Vu is left at the home of a monk after his entire family is executed at the order of the Queen, Thai Hau. She suspects the Nguyen family of assassinating her husband when he died in their home.

The monk trains young Nguyen Vu in martial arts and when he is old enough, tells him who he really is. This sets Nguyen Vu on the road to avenge his family’s name; along the way, he meets Hoa Xuan and her older sister Hoa Ha, who have their own very similar reasons for wanting to end the reign of Thai Hau.

They have many opponents along the way who are all searching for a letter written in blood by a dying eunuch. This “blood letter” reveals the secrets of the royal household at the time of the Nguyen family’s fall and the Queen’s rise, and could clear the Nguyen family name.

Opening with some beautiful location shots we find a young monk sweeping a temple courtyard. A stone statue of a lion begins to come to life, and like something out of “The Last Airbender“, in a swirl of cheap-looking CGI, the monk collars the statue and returns it to its stone state. 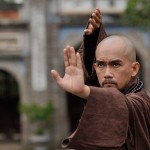 Twelve years on, the monk is sparring with Nguyen Vu on the shoreline. Traditional kung fu techniques are employed, such as longfist strikes and blocks, and southern-style footwork. This is interspersed with the sort of effects work that you might expect to see in a Stephen Chow movie such as “Kung Fu Hustle”.

Nguyen Vu heads to the city and encounters a group of flying archers who attack some imperial guards. Once on the ground the fighting negates the use of wires and we are treated to some stylish bo staff versus sword action. The camera follows the fighters in a wide angle and seamlessly blends in slow motion at key moments.

In the courtyard of the Royal Palace, Hoa Xuan armed with her straight sword and Nguyen Vu with his cudgel, fight off dozens of guards and archers. There is lots of flying about on wires for this scene that reminded me a little of the “Burly Brawl” from “The Matrix Reloaded”.

In a flashback we see Hoa Ha’s lover attempt to assassinate the Empress. It’s a short, but thrilling scene as he scythes his way through the guards with his broadsword.

Khuong Ngoc as the wicked and menacing Tran Tuong Quan and his squad of assassins attack our hero and the two sisters. The sisters are very adept with their Jianshu-style of sword fighting, as Nguyen Vu takes on Tran Toung Quan, who uses deadly swords that spear out of each of his sleeves like long switchblades.

The big final fight is between Nguyen Vu and Tran Tuong Quan in an atmospherically torch lit chamber. Initially nearly all the weapons-based duelling is airborne, before progressing to slightly more grounded hand-to-hand combat. Both actors acquit themselves well using their feet and fists amidst all the twirling in the air, before the ghost of “The Last Airbender” reappears in a blaze of CGI.

This is an admirable attempt to create a Vietnamese version of something similar to “Crouching Tiger, Hidden Dragon“. The film is beautifully shot and lit throughout with some very picturesque locations used, complimented by a musical score that gives the visuals and action an epic feel. The acting is a little melodramatic, and the occasional attempts at humour aren’t always successful. The pacing is also a little off with way too much superfluous exposition.

The Royal Palace is protected by dozens of archers

Hoa Ha has her own reasons for wanting revenge

SWORD OF THE ASSASSIN

Apart from the gorgeous cinematography, where this film mostly excels is in Johnny Nguyen’s fight choreography. He is obviously well-versed in the tropes of wuxia-style action and comfortable with the use of fists, feet and various weapons. For the majority of sequences he crafts scenes with a good balance of genuine physical skills and the fantastical wirework we have seen in the likes of “Hero” or “House of Flying Daggers“. Throughout the film there is a great deal of running up walls and bounding across rooftops a la “Crouching Tiger”.

On the whole, this film looks and feels like a Chinese wuxia epic, complete with thrilling, flying wire fights. On closer inspection, it often suffers from a lack of originality and looks somewhat the copycat. However, if you have enjoyed watching the films that “Sword of the Assassin” attempts to emulate, this movie is worth checking out.