When the Street Fighter series wants to move into genuinely dark territory, it pulls no punches. “Street Fighter Alpha – The Animation” is some of the best evidence of that you’re ever going to find. Treating Ryu as more of an anti-hero than the stoic warrior on an epic journey of self-discovery in “Street Fighter II”, the film is also comprised of some of the most captivating animation ever seen in a Japanese anime, and like all great anime, transcends the parameters of live-action while simultaneously feeling like it almost could be real.

(full movie at the end of this review)

Reprising the voice of Ryu from “Street Fighter II: The Animated Movie” is Skip Stellrecht for the film’s English dub, while Kane Kosugi voices the character in the Japanese version. Both actors communicate Ryu’s stoicism and discipline well, but Kosugi is ultimately the more impactful of the two (a scene where Ryu’s cry of desperation for his supposed younger brother echoes throughout all of Tokyo is double the emotional knockout punch in the Japanese dub.) Steve Blum voices Ryu’s close friend and training partner Ken Masters in the English dub, with Kazuya Ichijo providing the voice for the Japanese version, while the First Lady of Fighting Games Chun Li is voiced by Lia Sargent and Yumi Toma in the respective English and Japanese dubs. An entirely new character arrives in the film in the form of Shun, voiced by Mona Marshall in English and Reiko Kuichi the Japanese dub, and provides a pivotal new challenge for Ryu to face in quest to perfect himself into the ideal warrior.

Zangief has Shun in his powerful grip

This is gonna hurt

Something evil wants to overpower Ryu…

Shun is totally devoted to his training

Some time after the death of his wise mentor Gouken, dedicated student of the art of Ansatsuken, Ryu finds himself struggling with the infamous Satsui No Hado, or “Dark Hado”. The darkest element of the art, the alluring power of Satsui No Hado eventually overtook Gouken’s brother Gouki, transforming him into the demonic entity Akuma and leading him to murder the duo’s master Gotetsu. While visiting Gouken’s grave and reconnecting his good friend and fellow Ansatsuken practitioner Ken Masters, Ryu is met by Shun, a young boy claiming to be his long lost brother. Shun tells Ryu that he’d been raised in Brazil by their mother who sent him to find Ryu prior to her recent death, and although Ryu and Ken view the boy’s story with skepticism, they take him under their wing and allow him to train alongside them. As Shun and Ken prepare to enter an upcoming Street Fighter tournament in Tokyo, Ryu continues to struggle to keep from being overtaken by the Satsui No Hado. After returning to normal after a particularly violent episode late one night, Ryu instructs Ken to kill him if he is fully overpowered by the Satsui No Hado and unable to free himself in order to prevent him from succumbing to the same fate as Akuma. Although reluctant to agree to kill is best friend, Ken eventually agrees.

While the animation in “Street Fighter II” strove to give the viewer a somewhat less over-the-top depiction of its characters’ abilities, “Street Fighter: Alpha” ditches any such aspirations from the moment Ryu steps on screen. The animation is absolutely insane in how powerful it makes Ryu look when he is, for all intents and purposes, drunk with the might that the Satsui No Hado grants him. After seeing this film, the 1994 “Street Fighter” movie will probably feel even further removed from the games. When summoning the power of the Satsui No Hado, Ryu’s face undergoes a physical transformation akin to Reagan in “The Exorcist”, and he blasts off Hadoukens capable of disintegrating opponents and reducing entire walls of a skyscraper to rubble. Like Akuma’s metamorphosis, Ryu’s uneasy embrace of the Satsui No Hado is both amazing and terrifying in equal measure.

Shun battles with the power of Satsui No Hado

Sakura is safe in Kens hands

Ryu I am your brother

Ryu wont let the power of Satsui No Hado consume him

Among the film’s action scenes, two in particular stand out for their splendid animation and their incorporation of Satsui No Hado as an antagonistic element in the action. The first comes in Ryu and Shun’s entry into the Street Fighter tournament, which sees the two take turns battling Zangief, and effectively the Satsui No Hado itself, which almost completely overtakes each. This is where the viewer really starts to see the dark side of Shun, but also where they begin to care more about him now that Ryu is becoming more and more convinced that they are indeed brothers. The finishing blow of the sequence, as it were, should have been included on the film’s box art! More resembling a nuclear blast than a Hadouken, this is the image that every gamer conjured in their own mind the first time they ever played “Street Fighter”.

The finale of the film is equally thrilling in its animation style and thematic elements, in which Ryu’s opponent (who shall remain nameless for the uninitiated) attempts to goad him into embracing the Satsui No Hado as it is Ryu’s only clear means of victory, which comes right on the heels of Ken launching the mother of all Shoryukens. This is exactly what “Street Fighter” should look like in anime form – dazzling animation, colossal chi (qi or ki) power, and impossibly muscular warriors who can easily hold their own against the likes of Godzilla!

While lacking some of the amiable charm of its animated predecessor, “Street Fighter: Alpha” is a decidedly deeper, considerably darker, and more emotional film as well. Like its predecessor, it’s a terrific starting point for anyone interested in investigating Japanese anime, both in how it stands on its own, and the sheer hyperbole of the animation. That, and Kane Kosugi voicing Ryu isn’t bad either!

Ryu struggles to fight off Satsui No Hado

Ken is ready for a powerful retaliation 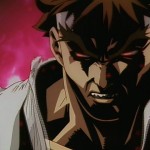 Dont make Ryu angry. You wouldnt like him when hes angry