The tone is just as goofy and the plot is just as negligible as its predecessor, 2000’s “Tokyo Raiders” but “Seoul Raiders” is also every bit as enjoyable a comedic kung fu spy romp as the original. Indeed, the film arguably improves on its previous incarnation in several respects, such as sharper direction from returning auteur Jingle Ma, plenty of martial arts action with a noticeable upgrade in both quality and quantity, whilst Tony Leung is his usual charismatic self.

Tony Leung returns to the role of Chinese super spy Lin, this time aided by a trio of lovely Korean assistants, including Sun-Ah, Yun-Mi, and Ji-hee, played by Choi Yeo-jin, Hanna Cho, and Jo Su-Hyun. Richie Jen steps into the role of American-born undercover agent Owen, while Shu Qi portrays the avaricious thief J.J., with James Kim assuming the role of the mysterious underworld operative known only as “Black Bear”.

In the heat of his latest mission, Chinese spy extraordinaire Lin makes off with a pair of bronze plates used for making counterfeit American currency, narrowly running afoul of a gang of mobsters and a young thief named J.J. also in pursuit of the plates. However, no sooner than Lin arrives at the U.S. Embassy to turn in the plates and cash in the hefty reward, one of the Embassy’s staff named Owen moves in to steal the plates and hightail it to Seoul. Lin quickly rounds up his trio of hopelessly love-lorn Korean assistants to steal the plates back, but soon he also finds J.J. back in the game, offering him a truce to track Owen down, retrieve the plates and split the reward.

J.J. sticks it out

Both Lin and his enemy refuse to budge 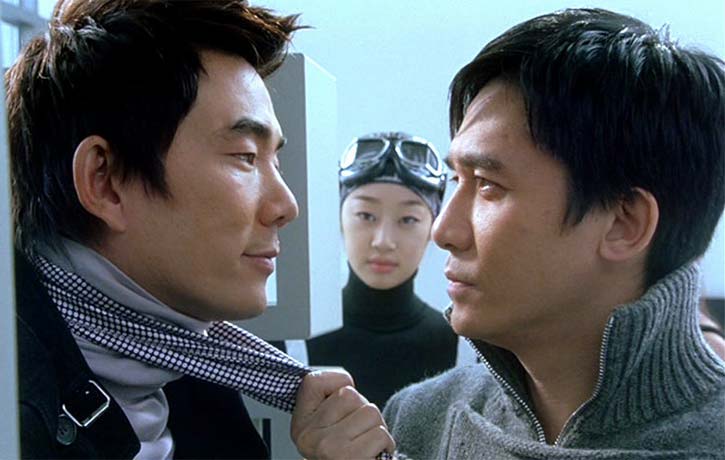 Lin has Owen right where he wants him

Not so fast son

“Seoul Raiders” is every bit the action-comedy fluff that “Tokyo Raiders” was, but it also manages to improve upon it in a number of ways, most notably with its harder-hitting action scenes. The hits carry a lot more impact and the overall power and energy of the fight sequences is just that much more obvious this go around.

The film also has a better grasp at how to interweave the comic relief into the action. This is something first displayed in the opening fight sequence with Lin and J.J. tossing a brief case with the plates back forth and directing their pursuers to the one holding it in order to catch a quick breath. Later in the film, Lin squares off in an alleyway with a bouncer in a Seoul night club, and after trading blows for a bit, the two simply stand face to face for literally (what seems like) hours waiting for the other to make his move.

Lin has some fun at Owens expense

“Seoul Raiders” trades just as heavily in Jackie Chan-style comedy as the original, but the film clearly has a much sharper understanding of how to integrate laughter into its action sequences without lessening one for the sake of the other.

There’s also a fresher understanding of how to utilize its female cast members. Lin’s trio of Japanese assistants threw their share of punches, but his crew in Seoul are almost on the level of bodyguards (Sun-Ah’s introduction, in particular, shows how much of an improvement the film’s made in its action sequences). With the leading man and the women of “Seoul Raiders” getting all the glory, poor Owen spends probably half the film on the run from some combination of Lin, his three assistants, J.J., or Black Bear’s henchmen.

Lins trio of assistants on guard

Lin leaps in to take down Owen

One of the film’s most hilarious set pieces sees Owen, thinking he’s fought off Lin and his crew, dangling for dear life outside the door of a speeding subway train, with Lin mockingly drawing a face over Owen’s on the window and throwing punches at it. After a subsequent butt-kicking from J.J., Owen then finds himself subject to the ultimate in culinary torture with Lin stuffing a fistful of wasabi in his mouth, before revealing it to be a harmless prank as the third act twist is finally unveiled.

As with the first film, the Achilles Heel of “Seoul Raiders” is that its finale isn’t entirely commensurate with the rest of the film preceding it, but the overall strengthened tone of the film’s action combined with its heightened skill of incorporating comedy into it nevertheless leads to an ending that, like the film as a whole, is a refreshing and welcome improvement on the original.

J.J. with an air strike

Life is sweet with the candy in hand

It may still be a screwball farce with a plot whose details no viewer would be that bothered to remember, but “Seoul Raiders” is still an enjoyable romp with refreshing improvements over the previous ‘Tokyo excursion’. There’s a wittier approach to its comedy, tougher, snappier fight sequences, and a better understanding of how to blend the two. Tony Leung leads the way with his signature charisma, and the film overall simply feels more finely-tuned and well-orchestrated. You’d have thought Bangkok would’ve been the next most likely destination for Lin’s next adventure, but with “Europe Raiders” in theaters across Asia, that’ll work, too!

J.J. fresh from another heist

Lin rounds up his Seoul crew

Lins in a tight spot

Seen “Seoul Raiders”; what did you think of it? Keen to see Tony Leung return to the role of Lin in the newly released third film in the series, “Europe Raiders”? Let us know in the comments below; Like, share and join in the conversation on Facebook and follow us on Twitter & Instagram. (Make a SEOUL connection; come and Raid KFK’s FUniverse of exclusives, subscribe for videos and more!)