He is best known internationally as everyone’s favourite handyman and the world’s most-beloved karate sensei, ‘Mr. Miyagi’ from The Karate Kid saga, as well as ‘Arnold Takahashi’ from the world-famous, 70’s and 80’s sitcom, “Happy Days”.

Writer and director Kevin Derek presents us with an informative and compelling documentary telling Morita’s story combining his own words from archived footage together with exclusive testimonials from those who knew and loved him most.

Pat Morita features not only through clips from his shows and films, but also chat show interviews, and exclusive interviews with Morita’s family, friends and co-stars including his wife Evelyn Guerrero Morita; from the show “Happy Days”: Henry Winkler, Marion Ross, Anson Willams, and Don Most.

Writer and director Kevin Derek, skillfully peels back the layers to help us understand the man behind the mask of everyone’s favourite comedian and stoic karate sensei.

What we find, through stories relayed by family, friends, and colleagues throughout his fascinating career, is a genuinely funny individual who fought some really tough battles in his life yet somehow kept smiling.

Using Morita’s own words, Kevin Derek reveals the conflicts he endured that started with his illness as a child having been struck down with debilitating spinal tuberculosis.

By the time he recovered, America was at war with Japan and Morita, like many Japanese Americans, was sent to an internment camp which, as he put it, were really concentration camps.

The film also features Morita’s battle against post-war systemic racism that mirrors Shihan (Grandmaster) Fumio Demura’s experience, which featured in “The Real Miyagi“. Whereas Fumio won over America with his martial arts skills, Morita used his penchant for comed

The film captures some of the most colorful aspects of Morita’s early-career, stand-up routines which were little known to international audiences, pre-internet.

Pat Morita in The Karate Kid

The way in which he twisted stereotypes inside-out in order to score laughs and shine light on his talents revealed more about Morita as a trendsetter and groundbreaker paving the way for Asian-American entertainers.

From “Happy Days” to “The Karate Kid”

The focus inevitably turns to his most famous and globally-recognised work, firstly the 1950’s set sitcom “Happy Days”, and of course the role that truly put him on the world map – that of ‘Mr. Miyagi’ in The Karate Kid saga.

To give a more rounded picture, Derek adds extensive interviews with many of his co-stars including ‘The Fonz’ (‘Fonzie’) himself Henry Winkler. Their stories add a few surprising elements such as the impact he made and his legacy long after he left it, and how one episode marked a comical foray into martial arts that predates “The Karate Kid”.

It seems that Morita’s personal battles were never-ending and Derek brings to light just how challenging the intervening years were for Morita, despite landing some roles that continued to pave the way for Asian-American entertainers. Yet, there’s also a real sense that his comedy success almost barred him from winning his other iconic role, as Mr. Miyagi in “The Karate Kid”.

With insight provided by writer/creator Robert Mark Kamen, and the cast including Ralph Macchio and William Zabka, we’re treated to plenty of behind-the-scenes detail for the ardent fans of the saga. Yet they also offer a transcendent look at Morita’s personal side, continuing to peel back the public layers of a struggling, private man.

The Darker Side of Morita

The film takes a darker turn, and here Derek pulls no punches tracing Morita’s slow career decline and the stark revelation of his troubled side through insight from Morita’s third wife, Evelyn Guerrero.

Ron Thomas with the crew

The refusal of Morita’s ex-wife and three daughters not to be featured makes a powerful statement. Guerrero gives a frank, dual picture of her late husband with the most glowing praise, and stinging insight, talking about his work ethic, sense of humor and fortitude.

Guerrero then paints a picture of a troubled, tortured soul and how he was in fact, a high-functioning alcoholic who was nearly always inebriatedm even on set. Though he includes tales of how Morita squandered some professional obligations, and opportunities, Derek handles this side of the man with great sensitivity and tact.

These revelations hit like a straight punch to the gut and linger long after the credits roll. Derek however remains conscious of Morita’s legacy and reminds us of the joy he brought through his work and of how he mentored those who he worked with, even as he was struggling to find his own way.

Kevin Derek hails documentary films as ‘love projects’. “You need to truly believe in the subject matter before you take the journey because it takes many years to create one.”

His latest cinematic labour is full of love for Morita. It is one of the most heart-wrenching and heart-warming stories of a man who, from the moment he was born, fought incredible odds, be it with crippling tuberculosis, hateful bigotry, to the inner demons that would overwhelm him later in life.

Be it through his own words or those of people who knew him best, Derek takes the viewer on a visceral journey through Morita’s life that is almost rollercoaster-esque. Once again Kevin Derek wears his heart on his sleeve not shying away from revealing Morita’s highs and lows.

Derek’s stories always end on that all-important legacy that is left, and here is no exception. The film reminds us of how Morita overcame institutional racism, battled personal demons, making an impact with an often-understated legacy as an entertainer, and influential, ground-breaking Asian-American.

For martial artists, Morita’s input into the character and his performance as Mr. Miyagi almost single-handedly rejuvenated passionate interest in karate worldwide, in both youngsters and adults.

Overall, “More Than Miyagi: the Pat Morita Story”, is an epic tale of a man who fought stiff odds and battles through much of his life, and has left an enviable legacy that continues to inspire and influence generations of entertainers and martial artists alike.

Behind the scenes on Karate Kid 2 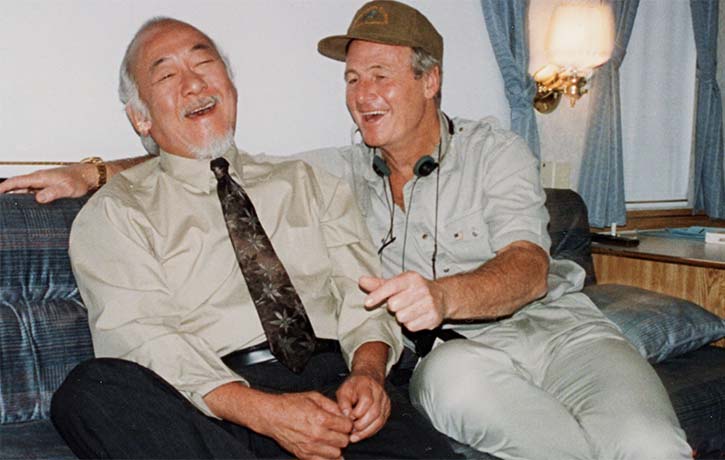 You can see “More Than Miyagi: The Pat Morita Story” on Amazon Prime now!

What are your impressions of this documentary, or have you already seen it? Which other martial-arts masters in cinema impressed you most over the years? Let us know in the comments below, join in the conversation, share this on Facebook, and follow us on Twitter & Instagram!

KARATE KIDS: Find your MIYAGI SENSEI in the KINGDOM OF FU, and check out these Top 10’s, Top 5’s, deep-dive interviews, WAX ON, WAX OFF in KFK wear, and subscribe for more MASTERS of FU on YouTube!