Memories of the Sword

“Memories of the Sword” is a beautifully filmed wuxia drama that strives to be the most extraordinarily artistic film of its kind since Zhang Yimou’s “Hero”. For all of its commendable effort though, in soaring toward the highest of highbrows, an overuse of slow-motion and an unnecessarily slow pace hinder it in this quest.

Kim Go-eun takes the lead in the role of swordswoman Hong-yi, who embarks on a quest of vengeance against the villainous Deok-gi, played by Byung-hun Lee, best known for his portrayal of Storm Shadow in the “G.I. Joe” movies. Jeon Do-yeon and Bae Soo-bin portray Deok-gi’s former allies, Seol-rang and Poong-cheon, with Lee Junho rounding out the cast as Hong-yi’s ally, Yull.

During Korea’s Goryeo era, three master swordsman, Deok-gi, Seol-rang, and Poong-cheon, participate in a rebellion, only for Deok-gi to betray his allies at the last minute and kill Poong-cheon. Seol-rang manages to escape with her life and raise Poong-cheon’s infant daughter, Hong-yi. Eighteen years later, Hong-yi, under the alias of Seol-hee, participates in a sword match that Deok-gi, now a powerful warlord under the name of Yoo-baek, witnesses. Before long, he discovers Hong-yi’s true identity, putting her and Seol-rang on a collision course with the ruthless general and giving them a chance to take vengeance.

Able to leap tall flowers in a single bound

Leaving his student in the dust

Deok gi looks on from his throne

Deok gi has a flashback

If you manage to make it to the end of “Memories of the Sword” without asking “Would you just get to the point already?” out loud, you deserve a standing ovation. Seeing the film in its entirety, it’s hard not to walk away with the distinct impression that it’s been created by filmmakers who have just stumbled upon the concept of slow-motion and consider it the most singularly fascinating thing since the creation of fire.

That’s not just the case with the use of slow-motion as a cinematic technique, although if you took all out all the slow-mo, the film would be at least a half hour shorter. It’s the pacing of this admittedly gorgeously photographed film that is tediously slow and sluggish, like sitting in a Rolls-Royce perpetually kept in neutral.

Shots hold on poker-faced actors for agonizing stretches of time, scenes go on far beyond their ability to serve either the story or the characters and by the half way point, it’s hard not to feel like the film hasn’t simply been going in circles. If you’ve secretly been wanting to indulge in a whiff of the slo-mo drug from “Dredd”, climb aboard the “Memories of the Sword” train, because boy, will you get your money’s worth! 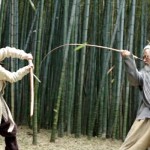 A novel approach to sword sparring

A rare moment of remorse from Deok gi

Hong yi puts her foot down

Not that the film gets any more exhilarating whenever something’s actually happening onscreen. The sword fighting sequences in the film fall into three separate categories of how not to do it. The first comes in Hong-yi’s initial few skirmishes in the first third, each one completely undone by terrible editing and excessive shaky cam. Somehow, someway, the fact that an action sequence is completely worthless if the viewer can’t coherently see what’s happening on screen continues to not be a universally accepted fact among action filmmakers.

The second set mostly takes place in the latter third, beginning with a training sequence where Hong-yi spars with a sword master while both of them use the power of wire-fu to run up bamboo trees – shucks, if only I could remember where we’ve seen THAT before! Comparisons to “Crouching Tiger Hidden Dragon” aside, this is some of the goofiest and most uneven wire-fu that’s been done in a while. In one moment, the combatants look too guided, in another they’ll bound along like they’re jumping on a trampoline and in another, they’ll just morph into CGI cartoons.

Still at least you can make out the action in this portion of the film, but you’d do well to prepare to endure the camera literally zooming in and out every five seconds in the third set, which is how events play out when Hong-yi storms Deok-gi’s fortress at the climax. The same preparation would be advisable for the final duel between Hong-yi and Deok-gi, when the film’s fixation on slow-mo gets so obsessive that probably half of the fight consists of shots of the heroine and villain literally frozen in place.

A final clash of enemies

Hong yi conceals her identity from her foes

“Memories of the Sword” isn’t a bad film, but it’s one that’s far too enraptured and pleased with its own artistry to be a good one. It also feels twice as long as it actually is, and absolutely ruins its action scenes with camera techniques and wire-fu mishandling in a misguided attempt to look stylish. Movies like this are what the word “pretentious” was invented for.