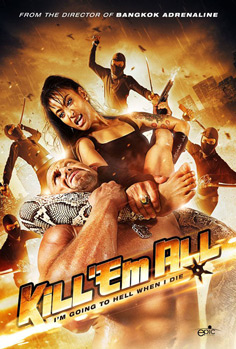 Kill ‘Em All is a propulsive and entertaining beat-’em-up romp that’s essentially a mash-up of Cube and Saw with a dash of Mortal Kombat thrown in for good measure. Directed by Raimund Huber, the man behind the similarly exhilarating Bangkok Adrenaline, Kill ‘Em All concerns a seemingly random assortment of international assassins who have been kidnapped by some secret organisation and made to fight to the death in something called the “Killing Chamber” – which resembles a high-end Eastern Bloc rec room. To escape this prison, our kung-fuelled captives must duel death-hungry ninjas, murder-masked maniacs and confront the deranged and deadly man who put them there…!

In an attempt to fill the flick’s ranks with colourful characters, writer Ken Miller has bestowed upon the world the likes of Black Scorpion, Carpenter (Joe Lewis (RIP)– in his final role), the Kid (Tim Man), and in a disturbing, and somewhat classless depiction of mental illness, there’s Mickey (Rashid Phoenix), the ever-smiling, child-like assassin who doesn’t know right from wrong. Johnny Messner plays Gabriel, a suicidal assassin with a penchant for bombs and prank phone calls who, at one point becomes the only character seemingly without a death wish. Legendary kung-fu master, Gordon Liu – probably known to most as Pai Mei in Quentin Tarantino’s Kill Bill – makes an appearance here as Snakehead, the Machiavellian ringleader behind the abductions. Here, Liu sits alone in a chair and cackles maniacally into a microphone like Inspector Gadget’s arch-nemesis, Dr. Claw – giving the combatants their instructions on who to fight and when.

Kill ‘Em All kicks off with a montage of assassinations across the world being performed by hired guns, fists and demolition experts alike. However, they soon receive a rude awakening, or sedative rather, as they’re drugged and shipped-off to some crazy man’s torture chamber. They are informed by a Big Brother-type figure, Snakehead, that only one of them will walk out of the chamber alive, as they’re expected to fight each other in one-on-one combat until only a singular assassin is left standing. After some testosterone-fuelled displays of bravado and protest from the captives-turned-contestants, Snakehead introduces them to one another; we have Schmidt (an assassin renowned for his short fuse), The Kid (named so because he committed his first murder at 14), Takab (an ex-legionnaire who betrayed his own legion for greed), Som (a killer with a penchant for knives and guns), Black Scorpion (a tattooed native Thai), Carpenter (a legend among assassins), Gabriel (an explosives expert and classical music enthusiast who’s also inexplicably suicidal) and Mickey (a young lad with no concept of morality!).

Schmidt is the first contestant to make the highly irrational, every-man-for-himself decision, as he challenges The Kid to a duel. Disappointed at the premature punches being thrown, Snakehead fills the chamber with gas, rendering its inhabitants unconscious. The captives wake some time later to find Schmidt murdered in his sleep. Som and Mickey are the first couple to dance with death, as determined by the highly elaborate numbers system masterminded by Snakehead. After Som disposes of mental Mickey, she is permitted to enter the “Weapons Chamber”, wherein she is allowed to choose one device to utilize in subsequent fights. The next two combatants to square off are profanity-happy Takab and in-the-depths-of-despair, Gabriel. The suicidal American proves to be keener to live than we’d come to expect, as he emerges victorious after making use of a stray wire to strangle the unsuspecting Frenchman. The next killer to bite the dust is Black Scorpion, whose plan to murder Carpenter in his sleep backfires spectacularly. However, the unsanctioned battle leaves Carpenter mortally wounded and without access to a weapon.

The next match-up, featuring The Kid and Carpenter, is cut short before a death can be consummated due to some hanky-panky going on in the corner between Som and Gabriel, which turns out to be a surprisingly well-thought out scheme to get the prison door open. This ends the tournament-like solo combat portion of the film and from here, the remaining trio of assassins battle the peons of the organisation that kidnapped them, leading to plenty of slaughter as the team tries to find Snakehead: high lord of the cabal. Som and Gabriel team up to fight their way through numerous undefined levels of death and destruction against masked assailants, while The Kid seems to be stuck on the second stage with an entire army to deal with. Snakehead, dissatisfied with how long his detainees are taking to die, sends his two top stooges to sort out the outstanding captives. The trio reunites a while later, only to instantly split up again, and regroup a second time shortly after – precious screen time one feels could have been used, say, for character development or narrative depth.

The Kid takes no prisoners

The fight weve all been waiting for 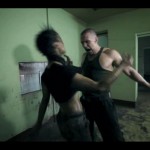 Som bricks the bejesus out of this unfortunate henchman

Anyway, after Gabriel is gunned down by some anonymous orange jumpsuits, The Kid is made to square-off against an incredibly muscular, sweaty woman, while Som is matched against a gigantic skinhead. After both our heroes emerge victorious, Som seeks out Snakehead, who she finds chilling-out in his La Z Boy. She tells Snakehead that he is responsible for the death of her late brother, who was also a top assassin and former inmate of the “Killing Chamber”. Som reveals that it was her purpose to be caught and brought to this desolate location, in order to exact her revenge on the one who killed her sibling. At the conclusion of her explanation, Som engages Snakehead in a battle to the death, in which the latter seems to have the upper hand until The Kid comes to the rescue. Som is then able to finish Snakehead off and the two surviving assassins live to kill another day…

Stunt coordinator/action choreographer Tim Man seems determined to ensure that each fight in Kill ‘Em All accentuates the individual martial arts styles of the concerned combatants. Man’s character clearly prefers swooping aerial kicks, for instance, and seems to perform one at any given opportunity. In fact, Man really steals the show in Kill ‘Em All. He goes to an enormous amount of acrobatic effort to lay waste to any foe that has the misfortune to step into his destructive path – flipping off walls and flying through the air to land crushing kicks on his opponents. Furthermore, he doesn’t mind the odd bit of kitchen-fu if they’re wielding cutlery and utensils in his handsome face. Even before the opening title shot, we are treated to Man slaying femme fatales and kung-fu chefs!

The initial Snakehead-sanctioned duel in the “Killing Chamber” features some of the most finely choreographed moves of the entire film. It’s a shame we aren’t privy to more screen time from Mickey, as his sweeping kicks and fast footwork are a pleasure to watch. He also displays some off-the-radar cool spinning heel kicks, which rival Tim Man’s offerings. Moreover, he possesses the unique ability to absorb an enormous amount of punishment while still managing to maintain a childlike demeanour and creepy smile. The subsequent standoff between Gabriel and the Frenchman is a more subdued affair as the two engage in a series of quick jabs and technical grapples, until Gabriel chokes Takab with a stray wire hanging from the wall…

The real action begins when the captives escape from the “Killing Chamber”, and are forced to battle their way through hundreds of ninjas, masked men and camo-clad army types. Man employs some incredible acrobatic feats against countless aggressors, displaying unbelievable skill as he kicks off one assailant into two, sometimes three more before hitting the ground. The film’s high-note occurs as Gordon Liu participates in a highly entertaining boss battle that’s reminiscent of the two-on-one showstopper in The Raid. Gordon shows that he can still rock-up a good fight scene and certainly does so here! I’m not sure if this was Gordon’s last film prior to his stroke, but he accounted for himself well here despite his age. And it’s interesting to watch Gordon’s Chinese kung-fu work against Muay Thai moves.

Honourable mention goes to the late Joe Lewis, who also showed, for the last time, that he too could go toe to toe with the young guns. All his fights look down to earth and, while he doesn’t pull off any tricks or jumps, it’s clear that he can kick the hell out of anybody stupid enough to challenge him!

Kill ‘Em All is light on plot and character development, but it makes up for it with well-orchestrated martial arts action sequences. The movie is a lot of fun and if you’re a fan of the genre you should check it out. Furthermore, the film gains massive credibility thanks to the inclusion of veteran martial artists, Joe Lewis and Gordon Liu. However, the all-fighting-all-the-time spectacle that is Kill ‘Em All fails to hide the fact that it’s simply a live-action version of a martial arts fighting game – a concept probably best explained by the character of Gabriel when he declares that the Killing Chamber “Sounds like a really, really good video game”.

Its a long way down for Som

It takes three to tango

Carpenter bags himself a ninja

Snakehead: “Hell is empty, and all the devils are here. There are not 50 ways of fighting, there’s only one, and that’s to win”

Mickey: “Hi everybody. Are you my friends?”

Snakehead: “This is where hitmen are taken to die”

Carpenter: “If it comes down to you and me, it ain’t gonna be you walking outta here. Nothing personal”.

Top Henchman 1: “You’re just parasites compared to us. It’s time to do some delousing”
Gabriel: “Delousing, huh. I don’t know what that means, but, delouse this!”

Snakehead: “You’ll never understand what method lies behind my madness”

Joseph is an enthusiastic film lover of all things martial arts!