“Jesus Christ Vampire Hunter” – to paraphrase Apollo Creed, it sounds like a damn monster movie, and….actually it kind of is, albeit one with just enough of a budget to buy a hot dog stand with and production values a step or two above the best Ed Wood movie. “Jesus Christ Vampire Hunter” is pure Z-grade schlock, with terrible action sequences, obvious dubbing on virtually every character, and marginally better cinematography than “The Black Ninja“. In other words, it’s by far the most “So Bad, Its Good” entry to ever pop up on our Lord’s illustrious career on cinema screens!

The role of the film’s titular vampire slayer falls to Phil Caracas, while Maria Moulton portrays his ally and fellow hunter of the undead, Mary Magnum. He finds additional aid in the former of Mexican wrestler El Santo, played by Jeff Moffet, while the role of local priest Father Eustace is tackled by Tim Devries. Ian Driscoll and Murielle Varhelyi round out the cast in the roles of Johnny Golgotha and Maxine Schreck, two local Canadians turned vampires.

In modern day Canada, vampires have descended upon the city of Ottawa, and the only man who can put a stop to the outbreak is none other than Jesus Christ, who after a shave and a haircut, sets to work to banish the vampire plague with the aid of his old ally, Mary Magnum. However, after Mary falls prey to the vampire menace, Jesus acquires a new ally in the form of Mexican wrestler El Santo, and the duo set about to put an end to the vampires’ stranglehold on Ottawa once and for all. 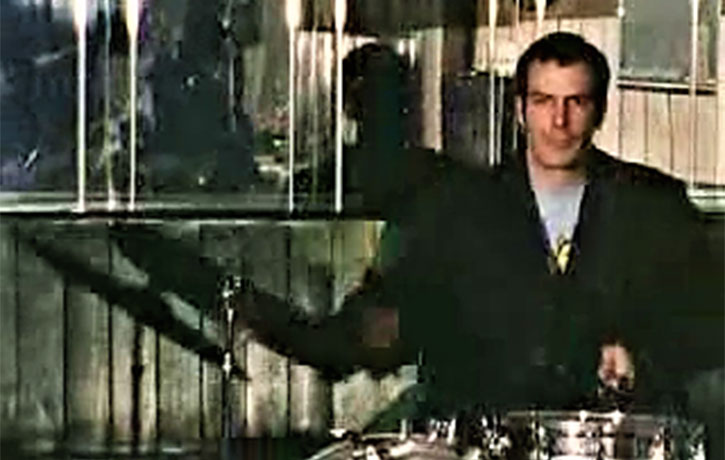 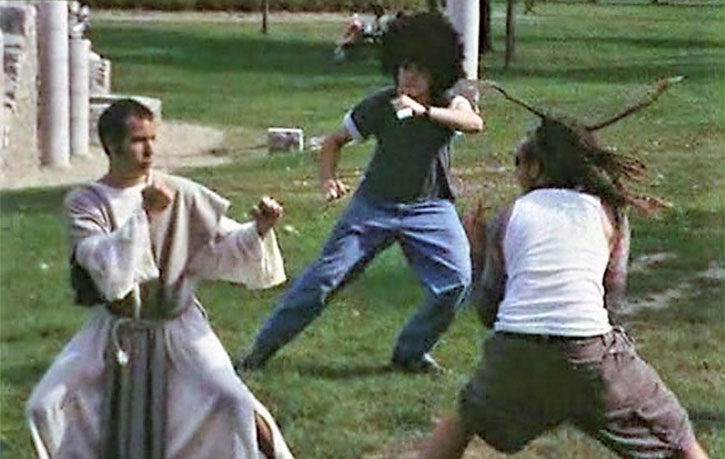 Jesus and El Santo on the new Sermon on the Mount 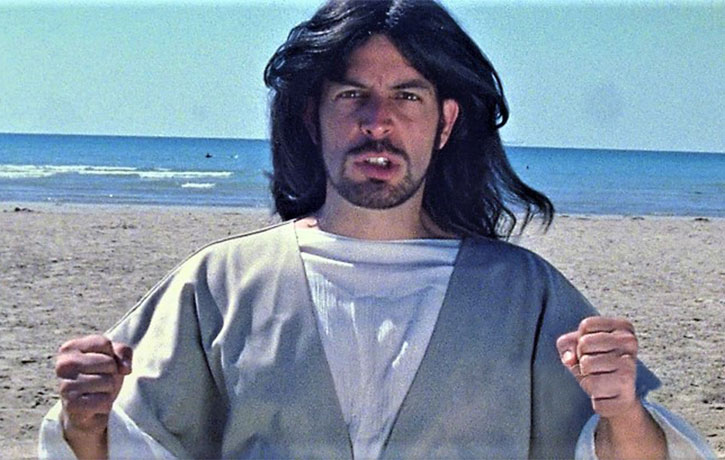 Jesus down at the beach

Jesus fashions some stakes for the vampire hunt

By any reasonable metric, “Jesus Christ Vampire Hunter” is indie film nonsense of the highest order, a Z-grade schlockfest in which such typical concerns as “continuity” are almost moot points.

The film opens with Jesus in a patently obvious wig, the only time in the film in which he embodies the image he’s most widely associated with, after which he gets a quick shave and haircut, only for the length of Phil Caracas’ hairline to constantly grow or shorten throughout the film. The audio of the film is very obviously dubbed and sounds as if someone wrapped a wet blanket around the boom mic. The cinematography, even by the lowest of B-movie standards, is anything but state-of-the-art. And the film segues from one story point to the next with interstitials provided by what looks like that rambling weirdo all of us have run into on a subway at least once in our lives.

Yet the film is consistently watchable precisely because the folks in front of the camera know what kind of movie they’re in, and the ones behind it know exactly the kind of stapled-together home movie they’re making. Our Lord’s first act after trimming his hair for the vampire hunt ahead is to marshal the forces of good in Ottawa through a song and dance number, and its right about here that anyone still somehow expecting a film with any semblance of structure or discipline can feel free to check out immediately!

There’s plenty of dreadfully executed kung fu fighting throughout the film. There’s nothing resembling a decently orchestrated action sequence throughout the entire film, and it lets you know right away the level of no-budget action movie mediocrity it has to offer with Jesus’ first battle on a beach with a trio of vampires that features the money shot of our hero twirling an enemy around by an arm and a leg with all the righteous fury of a middle-school playground scuffle.

There are a number of other set pieces of sub-par, student film-level technical prowess mixed with the ironic hilarity that can only come from a no-budget, bargain bin indie film, such as Jesus staking a group of vampires in a nightclub through their hearts with wooden drumsticks to the final battle in a junkyard with whatever semi-impressive stunts the budget could accommodate. But the unquestionable action highlight comes in the form of the Son of Man battling an army of about thirty atheists who pour out of the backseat of a car (that couldn’t possibly fit all of them). 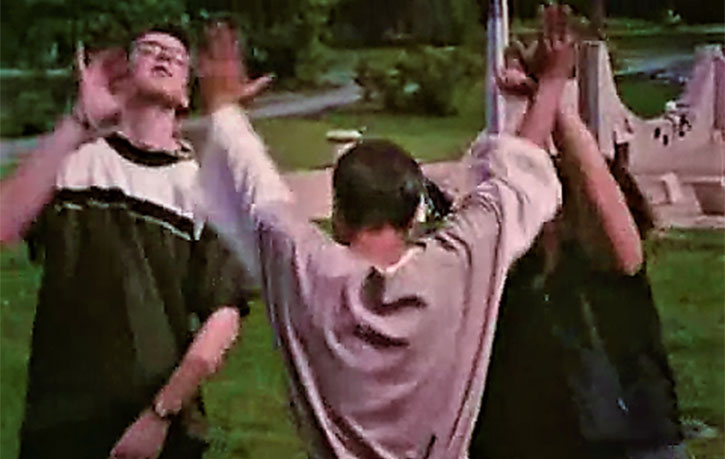 Jesus takes down two enemies at once 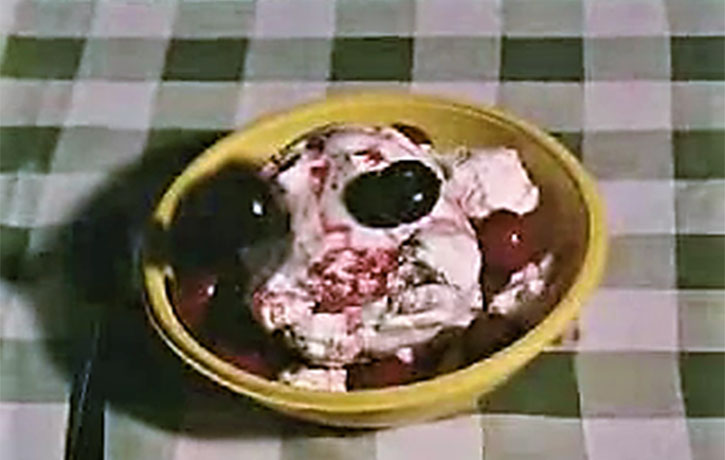 God speaks to Jesus through a bowl of ice cream 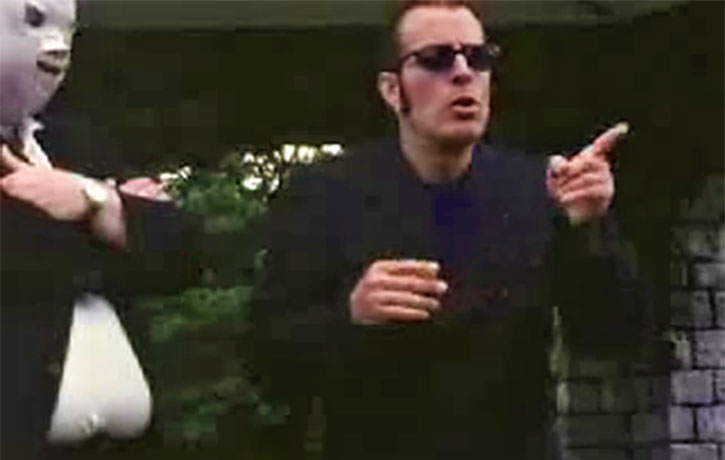 Jesus and El Santo are ready to join forces

Jesus deflects his enemy with a palm strike

Jesus has a new look

Jesus is in a slight predicament

It’s handled with all the skill seen in the rest of the film, and yet it’s impossible not to get a kick out of it for the sheer ridiculousness of what you’re seeing on screen. The sequence includes an especially nice touch in the form of Jesus catching an opponent’s kick, removing her shoe from her foot and clocking her on the head with it, accompanied by a sound effect that it would never actually make. If hilariously silly movies that revel in their own badness are your cup of tea, it doesn’t get any better than this!

If a film bearing the title “Jesus Christ Vampire Hunter” holds even a passing interest for you, you’ll get your “So Bad, It’s Good” money’s worth out of this film. It’s nothing approaching a good movie, and its budgetary restraints are marginally less obvious than “The Black Ninja”, but still plain as day. But for lovers of terrible, undercooked Z-movies that entertain because of their flaws and not despite them, it’s a must-watch, and like “The Black Ninja”, “Jesus Christ Vampire Hunter” needs a good “Rifftrax” live showing in the ‘worst’ way!

Music from the film

Seen the movie, what did you think? Which fights vs vampires or other dark forces come to mind? Let us know in the comments below, join in the conversation on Facebook and follow us on Twitter! (Don’t forget our previous reviews are just a click away and you might be surprised with the hidden gems you find!)

Revisiting The Wrath of Vajra