We’re pleased to bring you an interview with the originator of the movie “Iron Monk”, Jason Ninh Cao!

Jason began work in film and TV in 1995 where he discovered his love of acting, from that moment, his dramatic career has been on the rise! To date, his credits include the movie “Once Upon A Time In Vietnam” (working with Dustin Nguyen), “Balas & Bolinhos – O Ultimo Capitulo”, (as action director as well as playing the lead villain), the movie “Blitz” (on stunts working with Jason Statham), “Snatch” (working with Guy Ritchie), the “Shaolin Wheel Of Life” stage show (working with the Shaolin monks), London-based spoof Kung Fu movie “Draining Lizards” and the long running UK television series “The Bill”.

Jason homes in behind the camera

Let’s learn more about him and his passion project -a praiseworthy effort to keep real ‘old school’ kung fu action on our screens!

Hi Jason, nice to meet you!

Let’s get into this right away…for the benefit of our readers can you tell us when you were born and where you come from originally?

What are your vital stats, height and weight?

Have you practiced martial arts yourself?

Yes, I used to. For a few years I did Wing Chun, but I have stop doing it. Now I just work out in the gym.

Who would you credit as having most influenced you in the martial arts?

Who are your top 5 favourite martial artists? 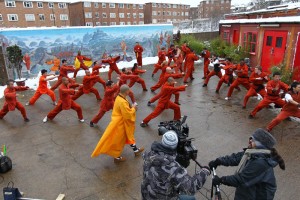 At the Shaolin Temple in London

Can you tell us what got you started in action movie making?

I saw “Enter The Dragon” when I was ten and fell in love with that movie and the action genre ever since. I also watch lots of Jackie Chan movies and all the old style Kung Fu movies.

How did you first get started as an action filmmaker?

I started by doing background work, then doing a bit of stunt, acting and it just slowly progressed into producing.

You’ve worked with famous Vietnamese actor, Dustin Nguyen who played Master Dao in “Once Upon a Time in Vietnam”, what was it like working with him?

I really enjoyed my time working with Dustin. He was the director, producer, writer and star of the film, it was very inspiring to be with someone like that. And in a way, it made me want to accomplish my own project even more.

Let’s move onto the main project you’re focussed on right now: IRON MONK: So, tell us, how did Iron Monk and the original trailer/short film for it come about, what’s been your involvement, what was it like making that?

In 2010 I had the idea for Iron Monk, I spoke to Yanzi and he eventually agreed to be Iron Monk. I put a team together and produced the trailer. We had lot’s of help from the Shaolin Temple UK and the Shaolin students.

What has the response been so far for “Iron Monk”?

The response has been amazing! Many people wanting to see the movie. The trailer has more than 730,000 views on YouTube.

Can you tell us in a nutshell what the story’s about?

It’s about an ex Shaolin Monk lives quietly in London Chinatown, but is reluctantly drawn into conflict with a vicious Triad gang that rapidly spirals out of control leaving him with a stark choice: face his past and fight… Or die.

You’ve mentioned that you want to go back to basics, and create something special here, can you explain?

I want to make an old style Kung Fu movie with no Wires or CGI. The main focus is on the story. The fights are part of the story, and they are real!

How did you first meet Master Shifu Yanzi, the head of the UK Shaolin Temple and get him on board?

I did a theatre show called “Shaolin Wheel Of Life” with the Shaolin monks. I met Yanzi through the monks.

Accomplished stuntman Vincent Wang will serve as the film’s fight choreographer. How did he first become involved with Iron Monk?   What kind of martial arts action could viewers expect to see?

Vincent and I have been friends for years. When I had the idea for Iron Monk he was the first person I turn to. He is a Wu Shu master and accomplished stuntman, so he understand Kung Fu from the root up, at the same time he knows to make a fight look good on camera.

You’ve also got martial arts champions Silvio Simac, Zara Phythian and people like Alex Reid and Mark Strange attached to the film: how did they get involved and what roles would they play?

They came on board after I told them my vision for the film. For example, Zara played a character called Miss Thunderleg.

Can you tell us a bit about the role you would play yourself?

I will play a triad boss called Bulldog, a reference to a great villain from John Woo’s “Hard Boiled” called Mad Dog.

You’re looking to raise funds to make the film, how did the “Iron Monk” Indiegogo campaign originate?

We initially looked to work with the private investors, but eventually we realised that Indiegogo would be our best chance to make the movie that I envisioned. On the Indiegogo campaign we ask for £500,000, this would allow us to produce the movie without compromise, however we can still do the movie even IF we don’t reach our goal. We have a plan in place to allow us to go ahead with production next year, it would mean that we will have to do it on a Micro-Budget as I will have to pay for it myself.

When would you ideally hope to release “Iron Monk” following its completion?

Which other martial artists/actors would you be interested to work with?

What’s one geeky thing that people don’t really know about you?

I like to visit DVD shops to look at film covers.

If you could fulfil any one dream, and money was no object, what would it be?

Make Iron Monk and give the supporters of the trailer something worth waiting for.

What do you like doing to relax, any hobbies?

Gym, I find being in the gym helps my mind to relax.

What in life do you really:

What are you really keen to accomplish in the next 5 years?

What advice would you give to a novice filmmaker?

Make sure to have a good story and just keep trying.

What special message would you like to share with Kung-fu Kingdom readers and your growing base of followers?

I would like to thank them in advance for liking and supporting my project, I hope with their help I can finally make Iron Monk and sharing my vision with them!

What’s one wisdom warrior quote that keeps you motivated?

I don’t have one. I just tried to do my best each and every day.

If people would like to find out more about you and “Iron Monk” where’s the best place to go?

Indiegogo would be the best place to start, here are a few more links. You are most welcome to follow us and check in on our progress!

Thank you Jason. We wish you every success with the getting this exciting movie into production – we look forward to hear more soon, good luck!

Thank you guys for taking the time to interview me!

NOTE: The Iron Monk team; producer Jason Ninh Cao, director Mat Sunderland, actor Dave Wong and the hero of the movie himself, Shifu Yanzi, will be attending the East Winds film festival http://www.eastwindsfilmfest.com/ this Saturday 1st of November, for both the “Z Storm” and “The Swimmers” screenings, so don’t miss it!