It’s pretty incredible to look back in time and remember there was a sixteen-year period wherein the “Rocky” franchise had apparently come to an end. That realization is even clearer given how much the series has roared back to life in a relatively short time-span, becoming stronger, with three new chapters in the past twelve years – each building on the films’ legacy in its own distinct way. And make no mistake, like its 2015 predecessor, “legacy” is the operative word for “Creed II”, which brings characters new and old face-to-face to settle the unfinished business of the series’ definitive turning point.

Michael B. Jordan leads the way once again in the role of Adonis “Donnie” Creed, with Sylvester Stallone returning as our hero’s mentor, the Italian Stallion, Rocky Balboa. Tessa Thompson is also back in her role as Donnie’s girlfriend, Bianca, while Wood Harris reprises his role of Tony “Lil’ Duke” Evers, and Phylicia Rashad returns as his mother and widow of his namesake, Mary Anne Creed.

Andre Ward is also assumes the role of Donnie’s old rival, Danny “Stuntman” Wheeler, while famed cutman Jacob “Stitch” Duran appears as himself, as well. Tying the film back to its roots in “Rocky IV” is the return of The Italian Stallion’s greatest opponent, the fearsome Russian boxing beast known as Ivan Drago, with Dolph Lundgren reprising his iconic role. This time, however, he’s joined by his equally cold-blooded son, Viktor, played by Florian “Big Nasty” Munteanu, along with a brief but pivotal appearance by his ex-wife Ludmilla, played again by Brigitte Nielsen.

Focused on being the next heavyweight champ

The Creed family pay their respects to Apollo

Adonis “Donnie” Creed has come a long way since he first stepped into the world of professional boxing. After many hard fought battles in the ring, he’s finally claimed the title of Heavyweight champion of the world, and in so doing, settled an old score with the former champ, Danny “Stuntman” Wheeler. He’s also finally worked up the courage to propose to his long-time girlfriend, Bianca, whose career as a musician is on a similar upward trajectory, and the couple also learn that their first child is on the way.

However, just when life couldn’t seem more perfect for Donnie, he receives the first challenge to his new title from rising Russian boxer Viktor Drago, the son of Ivan Drago, whom the world remembers as the man who killed Donnie’s father, Apollo Creed, in the ring some thirty-three years earlier. 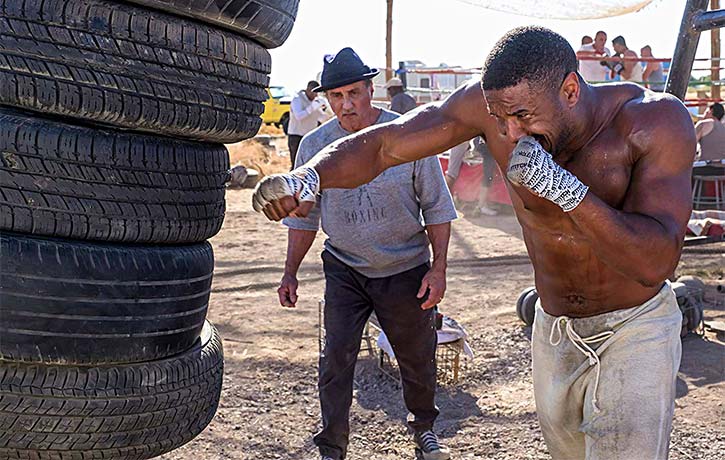 Ivan’s defeat at the fists of Donnie’s good friend and trainer, Rocky Balboa, forced him and his son into a Ukrainian exile, and he now sees a chance to reclaim his former glory vicariously with his son winning the heavyweight belt from its new owner. Ivan and Viktor’s constant taunting in the media and jabs over Apollo’s death leads Donnie to quickly agree to the fight, but Rocky recognizes the rashness of Donnie’s decision and refuses to support it. Soon, however, Donnie learns the hard way that he’s rushed into the fight without thinking, and a more careful strategy will be needed to defeat Viktor and restore his father’s honor.

While “Creed II” doesn’t deviate massively from the basic formula of the “Rocky” franchise, it continues with the same set of winning ingredients that have helped make the latter day “Rocky” movies among the best of the bunch. The chemistry between Michael B. Jordan and Sylvester Stallone is of such superb caliber, that it’s arguably among the best mentor-student relationships the world will witness in the 21st century.

To see Sly step back into the role that made him a star is never less than a pleasure, but the Rocky we see in the “Creed” movies is practically a new character altogether. A man who was driven to become a fighter partially for being “not much of a brain”, Rocky has matured into perhaps the most sage character the series has ever seen. Donnie, meanwhile, is still on a learning curve, and Michael B. Jordan dives head-on into the young Creed’s hot-headedness that was more sporadically glimpsed the last time around. Jordan’s infectiously charismatic portrayal of Donnie is more layered here in the sequel, with our hero going through a trial by fire to learn the folly of jumping into a fight with his fists doing all the thinking. There’s even a little more comedy than is usual for the franchise, with Jordan, Sly, and Tessa Thompson never missing the chance to bring out a little levity.

Training with his trusted mentor Rocky

The battle rages on

For Dolph Lundgren’s return as Ivan Drago, the emotionless Russian powerhouse is more sympathetic than you might expect for a man so apparently unaffected by Apollo’s death (although he and Viktor are hardly above using that to push Donnie’s hot buttons). What he and Viktor are fighting to reclaim is terrifically personified in Brigitte Nielsen’s brief but memorable return as Ludmilla. The audience sees just how badly Ivan, and by extension Viktor, have fallen from grace, and how much it’s affected them, in some surprisingly emotional scenes between father and son. Donnie and Viktor’s final smackdown, especially, will edge more viewers to the side of Team Drago than ever probably expected.

While the first “Creed” boasted some of the most finessed fights of the franchise, “Creed II” retains that sharpness while doubling down on the series’ most brutal moments in the ring. The film cuts right to the chase with Donnie battling Danny “Stuntman” Wheeler for the heavyweight title, with Donnie even winning his Mustang back in a nice recall to their first encounter. With a premise that would’ve read like some kind of “Rocky” fan fiction until now, the film wastes no time in getting the next generation of Creeds and Dragos into the ring.

Unfortunately however, Donnie lets his opponents get inside his head with their taunts, and to say it gets his ‘bell rung’ would be an understatement. Put it this way – you’re in for a visual aid of what happens when you have a ruptured kidney. Donnie gets a taste of fatherhood during his recovery, before the film jumps into that most beloved staple of the “Rocky” franchise – a heart-pounding, hero-rousing and obstacle-busting training montage. And let it truly be said that, like its predecessor, “Creed II” is every bit the equal of the “Rocky” movies in terms of its training sequences, right down to the accompanying soundtrack. However, the main event is Creed vs Drago redux, and from Donnie’s entrance into the ring alone, it’s clear that “Creed II” is abundantly aware of the boxing shoes its stepping in to fill, and boy, does it deliver. 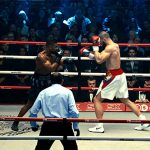 Baby boxer on the way

Ivan Drago arrives with a score to settle 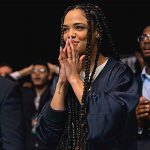 Bianca cheers for Donnie as he fights for his title

While the fights of the first “Creed” stood out for their finely-tuned sharpness, there’s an amazing marriage between that crispness and the shocking brutality of the original Creed vs Drago matchup. Donnie’s punch combos are almost laser-guided in their precision, while Viktor leaves both his opponent and the audience wincing in pain with his predilection for punishing rib shots. And while it’s hardly a new phenomena in the “Rocky” franchise for the finale to cascade with fever pitch emotional power, the direction that it comes from this time certainly is.

Three movies into its modern day revival, and thanks to the “Creed” movies, the “Rocky” series hasn’t felt this vitalized since its glory days. Michael B. Jordan solidifies himself as every bit the breakout star that Stallone was, while Sly once again captivates as ‘The Italian Stallion’ without having to throw a single punch, and jointly, their chemistry is never less than flawless. Dolph Lundgren also makes a welcome return in a more humanized take on Ivan Drago, while Florian Munteanu makes for an imposing successor to the Drago mantle in his own right. And to top it all off, Holy Macaroni, Adrian, haven’t the “Creed” movies got captivating boxing fights down to an art and science – whenever the big screen chiefs are ready to greenlight “Creed III”, count me in for a ringside seat!

What are your impressions of “Creed II” – and if you’ve already seen it, what did you think? What “Rocky” moments bring out your inner victor and fighting best? Let us know in the comments below, Like, share and join in the conversation on Facebook and follow us on Twitter & Instagram. Meantime, float like a butterfly, sting with your Creed and read KFK’s FUniverse of knockout content. (ICYMI: check out this interview with “Creed” fight choreographer extraordinaire Clayton Barber and you can subscribe for videos too!)