Colby Covington: Inside the Mind of MMA’s Biggest Supervillain

There’s nothing quite like the fight game. Watching two individuals face off in a competitive arena has always been a spectacle since long before ancient times, and it remains as much a business as it does a sport.

Two things evidently work in getting you quite far in MMA, or any combat sport. Firstly, you obviously need to be a highly skilled fighter, or an elite level one if you plan on ever touching championship gold. Secondly, you need to understand that your image and persona can become powerful tools in pushing your profile, marketability, and in some cases, notoriety. Colby ‘Chaos’ Covington is one of the best to run with both of these qualities.

Raised primarily in Oregon, Covington wrestled in the NCAA (National Collegiate Athletic Association) before starting his training in MMA with Dan Lambert and American Top Team. It’s clear from his fights how skilled of a wrestler he’s become, showing a his ability to bring pressure and a high level clinch and ground game.

However what is perhaps more notable about Covington is something that was kick started on October 28, 2017 in Sao Paulo, when his public image changed forever…

We’re going to take a closer look at perhaps the most controversial figure to ever compete in MMA, and how he’s used the power of notoriety in a business where it can work such incredible advantages, especially with a high-level fighting IQ. We’ll investigate what goes on, not only in his mind, but in his opponents’ too, that is after enduring a mountain load of ahem, ‘hyperbolic banter’ and pressure in the fight promotion amp-up stage!

So keep reading further to explore Colby Covington: Inside the Mind of MMA’s Biggest Supervillain

Does Colby Covington ‘Entertain’ You?

Covington stated in a 2019 interview that heading into his Sao Paulo Fight Night main event with Demian Maia, the UFC had no intention of re-signing him.

“Before this fight, they told me no matter what happens, I was ranked No.6 in the world, we’re not re-signing you, we don’t like your character, we don’t like your fighting style” said Covington, referring to his bout with Maia. “This is before I really started to become an entertainer and really understand the entertainment aspect of the business” , he continued.

Though the truth to the UFC really having that intention is unknown, Covington definitely went into that fight with the solid focus of making a statement. He dominated Maia in front of his own country and won a unanimous decision. But to ‘Chaos’, this wasn’t enough.

One of the Most Notorious in UFC History

He cut one of the most notorious promos in UFC history, dawning a new era for the welterweight contender’s persona, and an eternal rivalry between him and the entire nation of Brazil.

Just like that, the spotlight was on Covington. Whether you loved or hated what he did, you were dialled in. 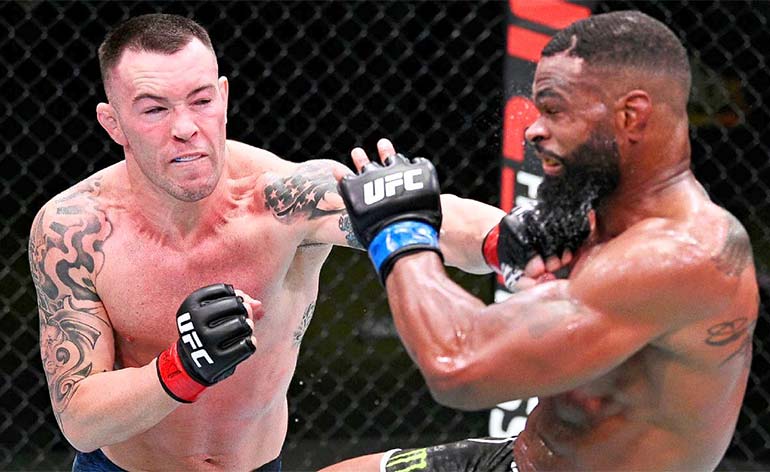 So where did this fire come from? Well, Covington is a self-professed pro wrestling fan, who grew up idolising the likes of Ric Flair, “Rowdy” Roddy Piper, Randy Savage, and other well-known heels.

Now we all know this kind of wrestling is scripted entertainment, and a “heel” or “bad guy” would typically sell a big event by drawing disdain from the audience, who would tune in to look forward to the “face” or “good guy” give him/her a good beat down at their match.

The character of Covington is built completely off this concept, wearing bright suits and MAGA hats at press conferences, trash talking to the extreme, and creating a distinct divide between him and his opponent.

Covington’s eccentric character is in many ways a genius tactic in throwing off his opponents’ game plans. The bright orange suits, cheesy smiles and potty-mouthing often aren’t expected to develop into the monster he unleashes once inside the octagon.

Legit Skills behind the Gimmick

Even an elite-level wrestler like Kamaru Usman chose to keep his fight with Covington standing, in a desperate thirst to knock him out after a colossal build-up of bad blood. He didn’t attempt a single takedown.

The ‘gimmick’ makes many forget that “Chaos” is his given nickname for a reason, and the typical outcome is sheer domination on his part.

Covington often ‘trumps’ his fights winning most rounds handily, but it’s not something you may necessarily expect from the persona he projects in his pre-fight build ups.

Making the UFC Great or is this WWE-ism Run Amuck?

When it comes to powerful friends, they don’t get much bigger than the president of the United States. Donald Trump, along with his family, are all fans of Covington.

The former interim welterweight champion has attended numerous rallies, been invited to the White House, and has even received a personal phone call from the man himself live on air during his post-fight interview after beating Tyron Woodley.

Their bond has certainly boosted the patriotic Covington’s profile, as well as leveraged his confidence in the cage.

Love or Loathe Him, We all See How Good He is…

Even before altering his approach to media and fight promotion, there wasn’t much of anything “Chaos” had to really adjust about his fight game. Besides getting caught in a guillotine choke by Warlley Alves, he has shown that he has a constantly-improving, well-rounded MMA skillset.

Since the likes of Conor McGregor and Chael Sonnen, the importance of persona and fight promotion has never been more apparent. It’s ultimately responsible for drawing big numbers and a lifetime’s worth of attention for all kinds of audiences. Colby Covington recognises that mere “2D”-fight personalities just don’t cut it, which probably explains why he’s running with the torch faster than ever.

Colby Covington is in his prime, at 32 years-old, (with 16 wins out of 18 matches) and there’s certainly no doubt he’ll produce many more ‘entertaining’ and controversial moments in his promotional game, along with some stellar fights and performances. What do you think of the entertainment aspect playing a big part in combat sports? Could it go too far into WWE-ism? Which other MMA fighter’s mind do you want to see get KFK’d next?

GET CHAOTIC in the FUniverse with these Top 10’s, deep-dive interviews, unleash your MMA moves in KFK Official gear and subscribe for more frenetic-chaotic fight action on YouTube!

From an early age, Ollie developed a deep love for Asian action cinema and subsequently the more traditional martial arts. He trained and competed in judo up to his university years and now enjoys nothing more than covering combat sports as a journalist!