Most everyone in the martial arts world from the greenest students to the most senior teachers know of and were influenced by Bruce Lee in some way. Such was the profound sense of loss at his death that his influence and adulation continues onward and upward to this day.

This year marked the 45th anniversary of Lee Jun-fan aka Bruce Lee’s untimely death at the age of 32, followed by the Hong Kong release of his seminal epic “Enter the Dragon” still regarded as the greatest martial arts film ever made. It’s an anniversary that has attracted much reflection and re-examination of the man we thought we knew starting with the release of Matthew Polly’s epic biography “Bruce Lee, A Life”.

Continuing this reflection, Cardiff University’s Martial Arts Studies Network, helmed by Professor Paul Bowman, dedicated their recent 4th annual conference, on 11th and 12th July, to examining “Bruce Lee’s Cultural Legacies”. Although a smaller gathering than usual, the conference brought together scholars and academics from all over the world to the Bute Building of the University’s School of Journalism, Media and Culture, including Matthew Polly who presented his keynote speech, to examine what they considered to be his legacy. Here are a few highlights of some of the enlightening discussions about the transcendent Bruce Lee. 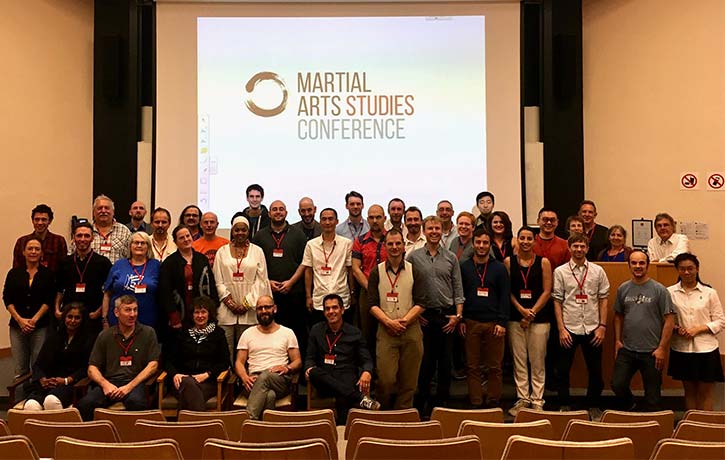 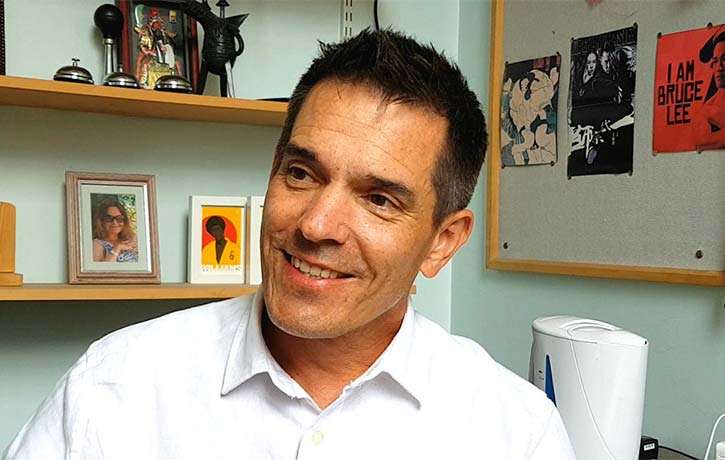 The conference kicked off with Glen Mimura, Associate Professor of the University of California looking at how “Way of the Dragon” (WOTD) – which Glen considered to be the only true Bruce Lee film since he was its star, writer, director etc – illustrated the historical forces of a rapidly changing Asian culture and way of life. Glen discussed in detail both the cosmopolitan humour, and European influences of the film drawn more from Sergio Leone’s early films and less from Hollywood. Glen also observed how Bruce Lee created a version of movie masculinity championing the underdog who overpowers the west in the shape of its champion ‘Colt’ played by Chuck Norris. How ironic that this legacy drifted to a more conservative image of western macho-ism embodied by Chuck Norris in his own films who has since become a right wing icon. Assistant Professor, Eric Pellerin from Medgar Evers College City University of New York – where he is the Serials Management/Reference Librarian – also talked about WOTD but more as an illustration of Bruce Lee’s battles to protect his image on film.

The theme of masculinity was further examined by senior lecturers Dr Luke White (Middlesex University) and Dr Lindsay Steenberg (Oxford Brookes University) but with very contrasting approaches. Lindsay placed Bruce Lee’s heroic icon in a similar vein of the muscle bound heroes of the sword and sandal epics of the day – usually featuring the chiseled form of bodybuilder Steve Reeves. Lindsay saw a shift away from these traditional notions, of a very “sculptured” stiff character to Bruce Lee’s more dynamic and even intellectual one. Luke took a more modern perspective examining the changing notions of masculinity following the explosion of the “Kung-Fu craze” and our seemingly increasing fascination with the Ninja in particular illustrated in the Marvel/Netflix show “Daredevil”. Luke argued Marvel’s very own “Dark Knight” was an example of this fascination and that a hero like Daredevil illustrated a complicated relationship the west has with east – a mix of cultural appropriation and “asia-phobia” – a very yin yang perspective.

Offering a fascinating and musical insight into Bruce Lee’s work are lecturers Colin McGuire and Caterina McEvoy. Colin looked at Lee’s writing and terminologies of rhythm, tempo, and cadence. He argued that practicing martial arts with a musical understanding put the form into its cultural context. Caterina took a very literal interpretation of Lee’s writings and in a fun and fascinating presentation used musical notes on a page to not only demonstrate how Lee used pace, rhythm and tempo in developing his ‘non-style’, but how changing the note in a line up results in a “broken rhythm” that changes flow, pace and direction. 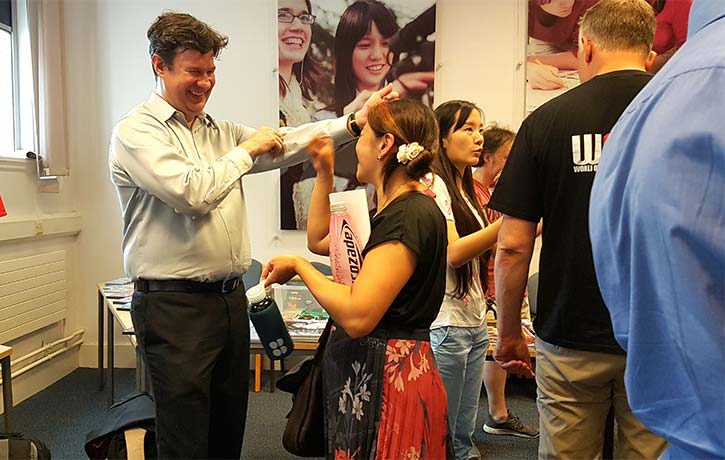 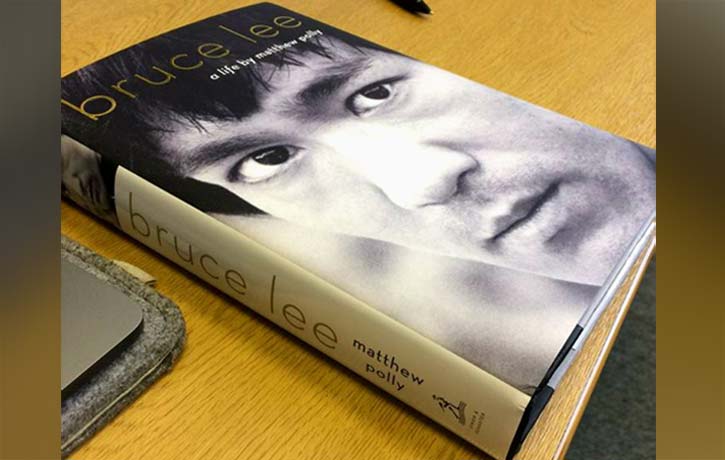 Get your copy of this

As the conference progressed things took a more, perhaps controversial turn. Lecturer Lyn Jehu from the University of South Wales looked at Lee’s essay “Free Yourself From Classical Karate” and its potential legacy as he interviewed martial artists who identified their practice in “traditional” and “modern” camps. Dr Kyle Barrowman, whose paper “Dragon Seeks Path: Bruce Lee and the Way of Perfectionism” secured him his PhD, promised to push the conversation into uncharted territory. Kyle made good on his promise using WOTD as an illustration of Bruce Lee’s spiritual journey. In his analysis Kyle likened Lee’s philosophy to traditional “American Individualism; “If you read Emerson’s “Self-Reliance” and Bruce Lee’s “Free Yourself from Classical Karate”, you could be reading the same essay.”

Everyone however was most intrigued to hear the keynote speech from scholar and author Matthew Polly, whose book “Bruce Lee, A Life” was recently released, was cited by many of the speakers, and has everyone re-examining the life and work of the great man.

The book was a culmination of seven years of painstaking research and interviews with those who knew Bruce best. The audience listened with interest as Matthew talked about Bruce’s family history and his life’s challenges, and Matthew’s own battles to tell Bruce’s story without “orientalising” him. The Q&A that followed had delegates eager to know more about the superstar of the hour from the author who got to know him best and included some revelations that we can’t mention here at this time. What came across from the speech is Matthew’s own personal affection for Bruce and a re-appreciation of him, shared by all in the auditorium, as a man just as much as a legend. 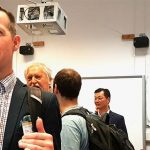 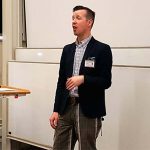 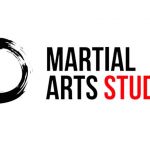 As it says on the tin 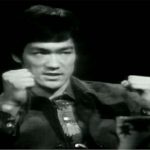 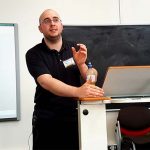 In talking to the delegates I learned the conference was celebrated as a unifying force of interdisciplinary academics and martial artists with one thing in common – Bruce Lee. Given Matthew’s belief in Bruce as a “bridge builder” this was no surprise. Over the two days we asked delegates what they felt was Lee’s lasting legacy and each gave a very different answer; from him bringing martial arts to the west to his power of unifying two very diverse and diametrically opposite cultures. These different approaches epitomised Bruce Lee’s complex, multi-dimensional character. This year the conference outdid itself in presenting a colourful collection of fascinating ideas that will have martial artists, educators, thinkers and enthusiasts talking for many years to come.