First released in Hong Kong under the name of ”Ji Zhan”, Unbeatable combines action and drama to turn MMA into more than a sport. The director and screenplay writer Dante Lam balances the viewers need for action with an engaging story line. It incorporates the two main aspects of a successful martial arts film, gripping the viewer from the very beginning.

Nick Cheung takes on the lead role, playing retired boxing champion Ching Fai. Cheung has starred in many popular films such as; ”The Stool Pigeon” (2010) and ”Beast Stalker” (2008) which he won best actor award for.

Eddie Peng stars alongside Cheung as Lin Si-qi, a young fighter who seeks out the help of Ching Fai to teach him MMA. Peng has acted in films since 2006, his most recent starring role was in ”Rise of the Legend” (2014), it is clear he is quickly making a name for himself in the film industry.

Crystal Lee and Mei Ting also play very important roles in the film, for the most part keeping the story alive with drama and a softness which contrasts to the brutal fighting scenes. Mei Ting plays Gwen Wong, a troubled single mother. Crystal Lee takes on the role of her daughter Dani and forms a strong bond with Ching Fai.

Working out at work

Talking things over at dinner with a friend

The story follows a retired boxing champion Ching Fai after he is forced to flee to Macau from gangsters. In his past he was involved with the Triads, served jail time and has gotten himself in debt with dangerous people.

From here the story alters between Ching Fai’s relationship with a mother and daughter, (Gwen and Dani) and a relationship he forms with Lin Si-qi, an aspiring young man in the sport of MMA.

Throughout the film we see Ching Fai evolve into a father figure towards Dani as they help each other through their troubles. He also takes on the role similar to that of Mr Miyagi in ”Karate Kid’ (1984), training Lin Si-qi to become an expert in MMA.

Unbeatable delves below the surface of fighting with fists and shows each character face different challenges in their lives. The tone of the film constantly changes between the fast paced action montages while the two men are preparing to fight; the humour and compassion shared between Dani and Ching; the troubling story of a single mother and back to the action and brutality in the cage.

Never to soon to learn self defence

MMA fighter gets all riled up

Lins nose broke and coach stepped in to straighten

Its a green sweep

Falling asleep on the training dummy

Expression after first taste of MMA

There aren’t as many fight scenes in this film as I thought there would be but where there is a fight scene it is expertly choreographed and gives a very realistic view into the sport.

The fight scenes which take place in the cage are brutal and fast paced from the onset, as soon as the sound signals the start of the match, the action begins. Chokeholds and arm bars along with spinning kicks and no shortage of hard hitting punches can be seen in the cage with no inch of detail being left out.

Both Lin Si-qi and Ching Fai both have a chance to show their skills against opponents; these adrenaline-filled scenes keep you in suspense. The back story helps you to build a bond with the characters and a sense of real fear fills you when they are fighting.

There is also a fight scene out of the cage where gangsters try to attack Ching Fai in his home along with Gwen and Dani. This scene resembles more traditional martial arts films, expertly arranged and fast-paced; Ching takes on all of his opponents fleeing from any holds they try on him.

The whole film has a realistic feel to it including the fight scenes which helps the viewer feel genuine apprehension as well as compassion for the characters.

Unbeatable isn’t just an action film with lots of blood and stunts; it is a well constructed film which highlights issues such as relationships and belief in yourself.

Humour, action and drama are all seen throughout the film. The acting isn’t compromised for the fighting scenes, both aspects are excellently delivered which balances the film and making it a good watch for anyone: young, old, combat fan or not! 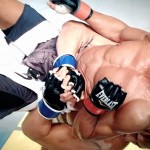 Cinching in the choke hold 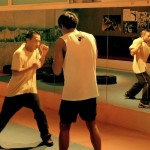 Ching Fai on the run

The Man with the Iron Fists 2 trailer arrives!

Since the age of 8 Holly has trained in Shotokan karate, inspired by her dad's commitment towards martial arts. Since starting karate Holly's interest in martial arts has continued to grow alongside a passion for film which led her to gain an interest in the action and martial arts film genre. Holly continues to train in Shotokan karate as well as having trained in kick-boxing previously but wishes to pursue a career in journalism. Her love of writing combined with her dedication and passion towards martial arts is what compelled Holly to share her admiration and views about martial arts films with others.