Releasing in cinemas this Wednesday is director David Yates’ rendition of the Tarzan story, “The Legend of Tarzan”, is a high concept, emotional and action-packed whirlwind. The film manages a blend of visually stunning CG landscapes, harnessing the natural beauty of Africa and its wildlife with an intense dramatic love story between Tarzan and his wife. Colonial discourse, an old vengeance and a confliction of nature and technology make the film dense in action, subject matter and emotion.

The love between Tarzan and Jane is the story’s centrepoint and the drive behind the narrative. This version first sees Tarzan as John Clayton, 5th Earl of Greystoke, a member of the British aristocracy who has since surrendered his primal roots. After a clever ploy by a Belgian Emissary in the Congo, Tarzan’s homeland, Tarzan and Jane find themselves back in Africa. Embroiled in a scheme to enslave the natives, they become separated, now Tarzan must pull out all the stops to save his wife and protect his people and homeland. 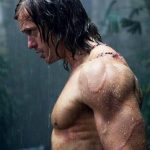 Tarzan in his element 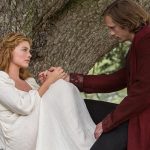 Tribal Fu mode is ON

Alexander Skarsgard in fantastic shape for the role

Our first taste of action is a scene in the beginning of the film, where Joseph Rom and his soldiers go looking for legendary precious diamonds from the Congo. The local tribe protect the diamonds and attack the procession on entry. The scene is tense and visually stunning, based in a foggy waterfall with a black stone valley. The tribe spring like ghosts from the surroundings, covered in white paint, they launch a surprise attack with spears with some brilliant slow motion combat. Joseph Rom uses some Aikido style deflection and utilizes his seemingly innocent prayer beads as a deadly weapon, foreshadowing key moments later in the film.

The signature Tarzan rope-swinging is taken, like most things in the film to epic proportions. We see Tarzan and others swing at blistering pace and great heights and distances. The rope swing is used impressively as a combat tool and sees Tarzan surprise attack several opponents, including both a leopard and a gorilla at different stages. One memorable moment sees Tarzan, with George W. Williams comedically clinging to his back. Along with other local tribesman, they all descend a huge mountain using vines to swing themselves through the jungle onto a train moving at 40mph -triumphantly blasting through the onboard soldiers with their momentum.

The actors’ movements in the film are impressive, including the combat scenes, with unorthodox manoeuvres and martial arts’ techniques clearly observed. When Tarzan has to withstand a brutal battle with a gorilla, he uses agility and evasion with some capoeira style floor movements. The film’s choreography shines here, with the work of prestigious Royal Ballet/dance choreographer and movement coach Wayne McGregor a clear influence. 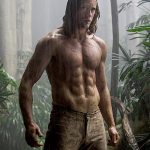 Tarzan literally figuratively caught the middle of a storm 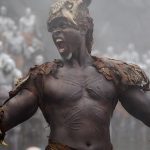 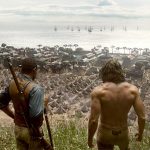 We need a plan 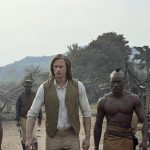 The hand-to-hand combat comes into play mostly when Tarzan meets his nemesis, tribal chief Mbonga (played by DjimonHounsou) to settle an old dispute. The combat in this scene is where the most recognisable martial arts fighting is displayed. Most of the techniques seen are power-based striking and grappling techniques, not unlike very basic boxing and wrestling, but also includes some evasion and blocking. An attempted wrestling takedown from chief Mbonga is met by several Muay Thai style downward elbows from Tarzan, Tony Jaa style! Tarzan also delivers a Karate style thrust kick to Mbonga’s midsection, which still manages to fit Tarzan’s character nonetheless.

The finale is a truly impressive spectacle, Tarzan cleverly shepherds and unleashes the full force of nature using his famed junglesque roll call at will on a humongous scale. The long sweeping camera shots create a vast horizon with an epic sense of perspective, contrasting the sheer wonder and power of nature to the sterilized settlements of the colonialists.

The scene then adopts a frantic nature which makes the scene at once claustrophobic and immersive making for a finale to remember.

The inevitable duel between Tarzan and Rom is highly tense and dramatic, where the prayer beads of Rom are again used in a creative way during combat.Tarzan uses everything he has left in his modern ‘loincloth’, employing his power, grit and a little help from a Brazilian Jiu-Jitsu (or MMA) technique. 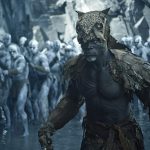 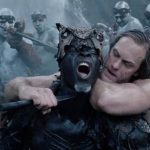 Tarzan gets a little help from his friends

Tarzan takes full advantage of the modern medium of film and its ability to entertain by storytelling. It’s a film based on primal emotions and can easily captivate the senses of an audience in its immersive cinematic experience. “The Legend of Tarzan” is an updated retelling of a classic tale, which sees intellectually revised characters, (such as a more independent Jane) as well as latest technologies used to make it relevant to today’s generation of cinemagoers. Whilst not a political exploration, it manages to raise several key points about contemporary life such as race and gender equality, as well as a lost connection to nature which seems to create a disenfranchised being of a human. Overall this is an exciting, sumptuous jungle romp with some truly fantastic action, definitely worth a watch!

Tarzan opens in UK cinemas on Wednesday 6th July, feel free to find out more here and on Facebook.
Want to train like Tarzan and get yourself in shape in for summer perhaps? Then click here to find out how!