The Once Upon a Time in China series returned with, well, if not a bang then at least a pop, as it launched into its third instalment. Fans of the series will in no way be disappointed by the staple of brilliantly choreographed fight scenes relying on the skill of Jet Li and the choreographic skill of Yuen Woo-Ping, who both bring together the skilful and stunning lion dance that forms the movie’s opening scene.

Jet Li returns in this third and final instalment of the Once Upon a Time in China series, another epic tale of the great hero Wong Fei Hung brought to life by Jet Li. It’s one that couldn’t be told without the equally important return of Rosamund Kwan as Fei Hung’s almost uncharacteristically bashful, inspiring romantic interest Aunt Yee, the introduction of Fei Hung’s Father Wong Kei-Ying strongly played by Shun Lau and the greatly underrated addition of Club Foot whose tortured performance played by Xin Xin Xiong oft times steals the show. Club Foot certainly appeals more as an antagonist than the rather weak villain of the piece while the notorious, wealthy and privileged martial artist Chiu Tin-Bai played by Jin Chiu acts superbly and really outshines the character he plays.

Fearing the growing control of China and its territories by foreign powers, the empress of China calls for a martial arts tournament to strengthen interest in the art and to show the foreign powers the strength of China. During this time of unrest, Kung Fu Master and healer Wong Fei-Hung travels with his betrothed Aunt Yee to see his father in Beijing, arriving just after the elder Master Wong has been attacked by a rival school looking to win the Lion Championship by any means. A man of peace, Sifu Wong finds himself caught between vicious triads, apathetic politicians and foreign agents bent on weakening China just as she tries to reclaim some of her former strength.

The hero who humbled all of China

A true hero takes all in his stride

From seeing the first fight scene, you’d be forgiven for thinking the action sequences in “Once Upon a Time in China 3” were becoming a little clunky. The first fight between Wong Fei Hung and the rickshaw drivers is full of Jet’s effortless skill and grace. And yet the scene itself just sort of…sits there, as though added just (because the creative team decided they needed some action) to keep the viewers entertained and not because it serves any real value or adds direction to the plot.

Happily the fight scene at Fei-Hung’s father’s workshop suffers from none of these weaknesses and is worthy of the series’ name. This is not just due to the ease with which it introduces Jin Chiu’s antagonist Chiu Tin-Bai but also because this is the first time we are introduced to the focused skill and quiet menace that Club Foot has in spades. He easily defeats Fei-Hung’s father and his disciples in a scene that possesses all the hallmarks we have come to know and love about the series as flashy martial arts moves tread a fine line between reality and the suspension of disbelief.

The first time Fei-Hung actually engages Iron Foot comes after Club Foot is tasked to take him out at Tin-Bai’s orders and we get the first real glimpse of his skill. Unlike others Fei-Hung has fought, you cannot but help see him as a real threat simply by the way he dances around the experienced master, forcing Fei-Hung on the defensive against his powerful kicks. 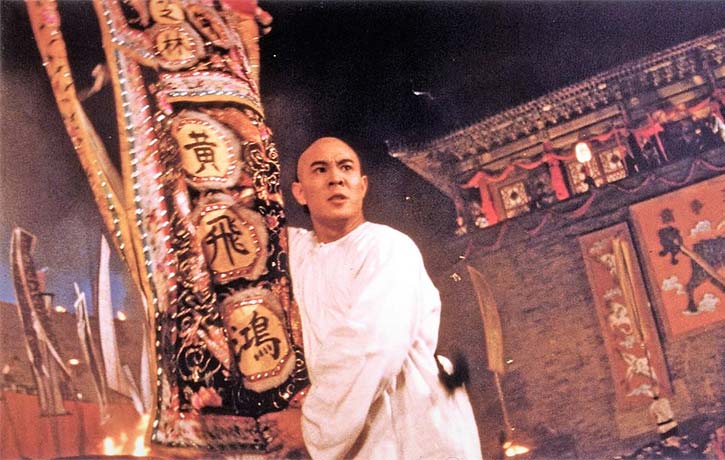 Bit of a dilema

The rest of the fight scenes while not exactly standing out as anything particularly ground-breaking do still play to Jet’s strength with plenty of room for him to show off the skills and moves he’s famous for and are no less glorious to watch. The scene where Fei-Hung engages three rival Kung Fu schools, brawling in the streets is worthy of extra special attention. No one can make a fight scene against dozens of people look so effortless, which isn’t to say there aren’t stand out scenes that make a lasting impression.

Take the fight scene between Shifu Wong’s apprentice Foon and Club Foot which is nothing short of artistry with the aggressive style of Club Foot quickly having the younger student on the ropes and on the run, (which in my opinion ends too soon) in what just might be the most moving moment of the film.

Things do take on a more varied approach when for example, Fei-Hung is lured into a trap; the composed master easily rises to the challenge. Jet Li’s screen presence and control of the situation keep the viewer following vicariously along with every kick, jump and step. Perhaps absent is a sense of jeopardy but that’s not necessarily a bad thing, to my mind; it just allows you to enjoy the action without being on the extreme edge (and falling off) of your seat!

I don’t think the last fight scene trumps the short-but-sweet first battle between Club Foot and Fei-Hung, I personally felt it had more real potential. It’s always refreshing to see a scene which takes a different tack than just two fighters trying to take each other down. While again, there’s not an excess of tension, it is certainly pleasing to watch especially with the addition of the now reformed Club Foot aiding his new master as they fight to prevent the assassination of an important Chinese government figure.

While Jet helps in no small way to carry the show, again it is Club Foot who shines with his focused fighting style that almost allows him to move blow by blow with Fei Hung as they battle through the dozens of lion teams all trying to claim the glory for themselves. While this scene might not be as traditionally epic as you might expect of the final fight in a movie, the way that the kung fu doesn’t get lost in what could have easily become a confusing melee speaks volumes to the skill of the creative team.

“Once Upon a Time in China 3” might fall slightly short of the heights reached by its predecessors (1 & 2); okay the story wanders a bit in places, dropping the main thread on occasion but the main story of a martial arts contest to prove Chinese superiority to the foreign powers occupying China will still grip new and old fans alike. Throw in the foreign schemes that are introduced almost two-thirds of the way into the film and you have a plot which certainly keeps the audience guessing.

If you’re looking for an easy-to-digest martial arts flick for some casual viewing with a memorable selection of moments that can’t help but draw you in (most notably the scenes with Club Foot) then this would serve you perfectly. If you want something a little deeper, then it works just fine for that as well. Not too heavy and not too light, it really makes for perfect easy viewing.

The one man you never put in a trap

Once again being the voice of reason

Words and wisdom together can end a fight

26 years on…What are your fave fights and moments from “Once Upon a Time in China 3”, and what do you remember best from the first two parts of the trilogy? Let us know in the comments below; Like, share and join in the conversation on Facebook and follow us on Twitter & Instagram. (Why not browse our FUniverse of other movie reviews too!)

Peter Jennings is a martial artist and aspiring writer. He has spent four years studying Wing Chun Kung Fu with one of the UK’s most talented instructors as well as taking private Shaolin Kung Fu lessons. He’s equally passionate about martial arts and writing. Having cut his teeth in the world of short story publishing and online commissions, he’s taking on more ambitious challenges, breaking into the world of the ‘martial article’.