From the producer of “Bloodsport” and “Kickboxer”, strap in for director Aaron Leong’s action-packed, feel-good biopic about the real-life, one-armed MMA fighter “Notorious” Nick Newell!

Nick was born with a congenital amputation of his left arm, which extends to just below his elbow. Possessing a short, muscular stump of a forearm he learned to grip and use objects with it from a young age.

Newell grew up playing soccer, then baseball, before switching to wrestling at Jonathan Law High School in Milford, Connecticut, USA.

This fighter’s underdog, true story is sure to tug on your heartstrings with its powerful drama, solid cinematography, and true-to-life mixed martial arts action!

With his most iconic acting roles being Theo Raeken in “Teen Wolf” and Mike Montgomery in “Pretty Little Liars”, his casting as “Notorious” Nick Newell presented a new challenge – playing a real person.

Cody Christian embodies the determined, never-say-die attitude of his character on-screen as well as off-screen in his relentless preparation for the role.

Elisabeth Röhm plays Stacey Newell, Nick’s ever-supportive mother. Financially strapped for cash and with her own dreams of going to nursing school, she is Nick’s rock who spurs him on to achieve his dreams. Elisabeth Röhm and Cody Christian have share great on-screen chemistry and delivering a convincing mother-son relationship.

The legendary Kevin Pollak plays Alex, the fight promoter who gives Nick Newell his first chance as an MMA fighter. From “The Usual Suspects” and “The Whole Ten Yards”, Pollak is in his element in this role, carrying it onto the screen with confidence, wit, and some hilarious facial acting to boot!

And finally, Barry Livingston plays Jeremy Libiszewski, who puts in a fantastic performance as Nick’s high school wrestling coach who becomes his MMA coach. Utilising the full extent of his character’s dry, unapologetic humour, Livingston endears us to the adoptive father-son relationship that develops between his character and Nick.

Nick Newell is born with a congenital amputation of his left arm, rendering life an uphill battle from the start. As a child, he is bullied and socially isolated until he bonds with Abi over a mutual love of pro wrestling.

One for the road

Fast forward to their high school years and the duo join the wrestling team. The only problem…Nick is terrible at it…but his mother Stacey and his wrestling coach Jeremy see potential. Inevitably though, his disability would hinder him in the cold, hard world of competition.

A few years later, when Abi is involved in a fatal motorcycle accident, Nick takes his place in an MMA fight but loses.

Finally, after seeing Nick’s grit in the fight, Jeremy agrees to coach him in MMA and the two set off on a treacherous learning curve to succeed in the sport and transform the supposedly disadvantaged Nick Newell into an MMA world champion.

The relationship between martial arts and human emotion is laid bare for us in several scenes, especially as Nick grieves the loss of his best friend, Abi. Nick resorts to releasing his agony through MMA training in a poignant scene – he pounds a heavy bag, screaming at the top of his lungs before collapsing in tears.

Cody Christian warned director Aaron Leong that he was going to give everything to the scene, so he may only have a couple of takes in him. Thankfully they were satisfied after two takes and the end product captures raw grief entwined with martial arts very nicely.

The innate challenge of starring in a biopic is the accuracy in recreating that person as authentically as possible. Everything from learning how to fight southpaw in Nick’s unique style, to brushing his teeth with the use of only one hand is accounted for in the film as Cody Christian faithfully reproduces it.

The fight promoter looks on

Writing a biopic presents its own set of challenges too; how true to the real life events do you stay? Would the plot benefit from embellishing or omitting certain story beats?

A huge source of strife in the film is the disrespect that Nick is subjected to because of his disability. The waterfall of obstacles that the character must overcome creates fantastic drama.

In real life however, Nick Newell mostly encountered supportive and respectful opponents. Fidelity to Nick’s real life here would have weakened his biopic’s character arc, so a series of malicious rivals made for more of an engaging journey.

Notorious Nick gets the belt

Cody Christian trained like a fighter for the role and it shows. The film makes us privy to every aspect of MMA – from the locker room banter, and drilling techniques to wrapping hands, and braving the cage.

Again, the proof was in the preparation. In Nick’s first attempt at MMA with Abi, he chokes his opponent unconscious.

This would be dramatic enough, but the film goes one further to show the opponent twitching before regaining consciousness. It’s the finer details of the action in “Notorious Nick” that separate it from a good few other combat sports films before it. 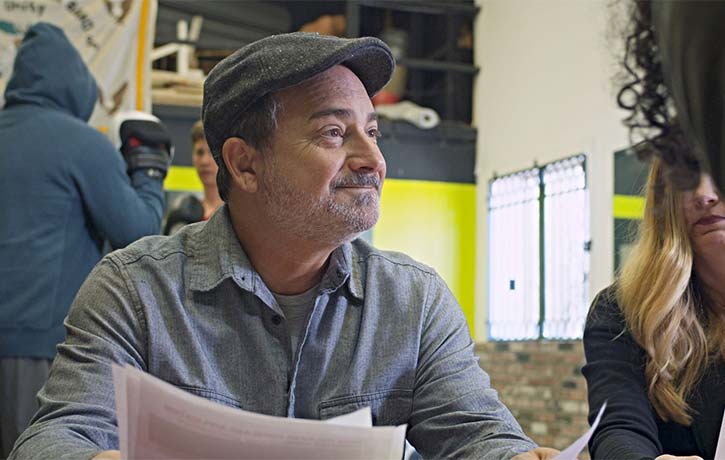 All this outstanding detail would not matter without equally deft cinematography though. The film’s colour grading is perhaps its most striking visual feature. Swaying from warm, softly lit scenes of celebratory ecstasy to the sharp, grey-blue hue of Nick’s lowest moments, we are really treated to an emotionally-charged, technicolour rollercoaster!

A small detail that didn’t go unnoticed is camera placement. When Nick fights with Abi watching, we see some of the action from outside the cage peering through the mesh. However, when Abi is no longer there to watch Nick’s fights, we spend most of the fight scenes placed in the cage with Nick.

Placing the camera in amongst the action gives the impression that that’s where Abi now watches from – in there with Nick, if not in body, then in spirit.

“Notorious Nick” is cut from the same underdog cloth as a “Rocky” – our protagonist outworks his adversaries to achieve what should never have been possible.

This story arc leaves you both teary-eyed and grinning by the end of its inspiring tale.

If you enjoyed “Warrior” or “Born a Champion”, then “Notorious Nick” should be next on your watch list. True to real life MMA action, stunning visuals, and a story that highlights how raw determination, and heart can overcome virtually any adversity.

The film adopts an economical, plot-focused pace that risks detracting from character development. However even with a script that doesn’t linger for a second longer than it needs to on any one moment, its selection of acting talent collectively took the story to another level, injecting its characters with extra complexity and personality.

“Notorious Nick” is out now, watch it on streaming platforms or order your copy from Amazon!

What are your impressions on this unique film based on the true-life story of the one-armed professional MMA fighter, Nick Newell? Let us know in the comments below, join in the conversation, share this on Facebook, and follow us on Twitter & Instagram!

TIME TO DIG DEEP: IF A ONE-ARMED FIGHTER CAN RISE TO PROMINENCE, WHAT COULD YOU DO? FIND OUT IN THE FU-niversity with these Top 10’s, Top 5’s, deep-dive interviews, TAKEDOWN YOUR CHALLENGES in KFK gear, and subscribe for more SPECIAL APPLICATIONS of FU on YouTube!