If you like fantasy adventures, and unlikely superheroes, Lu Yang’s “A Writer’s Odyssey” is right up your alley. Released just in time for Chinese Lunar New Year, “A Writer’s Odyssey” blends mythical elements like dragons and superhuman action into a truly eye-catching combo. For Lu Yang though, it’s just another day at the office.

The director of the wuxia epic “Brotherhood of Blades” and its sequel, “Brotherhood of Blades 2: The Infernal Battlefield”, Lu Yang is right at home behind the director’s chair for large scale epics. With “A Warrior’s Odyssey”, he steps into a new arena with a mammoth special effects budget and action scenes akin to a superhero version of “Crouching Tiger Hidden Dragon”. For fans of Asian cinema, “A Writer’s Odyssey” is most certainly something explosive to mark the early days of the New Year.

Here’s a quick synopsis: “A Writer’s Odyssey”, tells the story of Kongwen Lu (DONG Zijian), the author of a fantasy novel series following a heroic teenager, on a quest to end the tyrannical rule of Lord Redmane, under the guidance of Black Armour (GUO Jingfei). But in a strange twist of fate, the fantasy world of the novels begins to impact real-world life, leading Guan Ning (LEI Jiayin) to accept a mission from Tu Ling (YANG Mi) to kill the author.

Today, Lu Yang sits down with KFK (with special thanks to the Mandarin interpreter for this interview, Julia Zhu) to discuss the origins of “A Writer’s Odyssey” and the process of bringing the film to life!

Greetings Lu, how are you doing? Welcome to Kung Fu Kingdom! It’s great to connect with you.

So, let’s dive right in, tell us, is your film “A Writer’s Odyssey” as much for martial arts fans as it is for  those of Chinese culture? 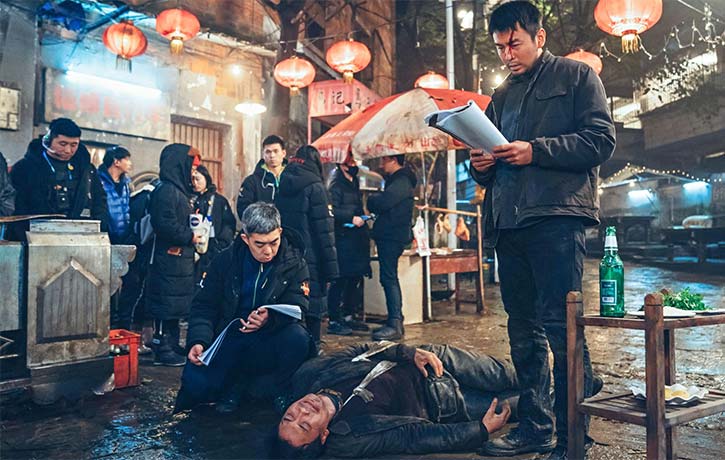 A Writers Odyssey blends the ancient with the current day

The pen is mightier than the sword

Indeed! This film is not purely based around martial arts, but we put a lot of martial arts elements in it, and we wanted to use this as a way to communicate with the international audience who are interested in Chinese culture as well as martial arts.

Sounds great. How did the film come about, and how did the making of “A Writer’s Odyssey” compare to other movies you’ve made, like the Brotherhood of Blades movies?

Well, it’s an adaptation of the novel of the same name. I read the novel in 2016 and wanted to make it into a film, and the preparation took a long time. We spent two years on the script and five years altogether in making it, but the process wasn’t easy, I had to devote a lot to making “A Writer’s Odyssey”.

It’s actually a little similar to “Brotherhood of Blades”, because it’s all about how the individual and their fate are related. We wanted to present that and express how an individual can stick to their fate and hope, and also how they can challenge their own fate. This is the expression that I want to present in future movies, as well.

“Brotherhood of Blades” has a historical background, as it’s set in the Ming Dynasty. “A Writer’s Odyssey” happens in a world similar to the real world, but it’s not a mirror of reality but a fantasy adventure story which I’ve always wanted to make. This story has given us a lot of freedom, but at the same time, a lot of difficulties (in the process).

Lu Yang orchestrates the next scene

Lu Yang ponders how to manifest his vision

So, what can you share about the process of designing the action for “A Writer’s Odyssey”?

Well, after the script was completed, every division of the film, from art design to visual effects were communicating with each other, because for this film, we all have to be on the same page.

We had a lot of meetings just about what is the best way to present everything, and when it came to the action scenes, we didn’t want to present it like “Brotherhood of Blades”, and we didn’t want to present it ‘Hollywood-style’, either. We wanted to invent a new action style to portray this story with an interesting, new, and fresh perspective. So, during shooting, it was actually new, and fresh to me too, and I had to talk and learn from different talent to make the best of this story.

One thing in particular with the flying dragon, is that it’s made of lanterns, and after the art department presented us with the design, we had to pause because we didn’t know how best to design it for actual shooting. We used a lot of things to simulate it like pipe from washing machines, and that was probably one of the most memorable things about shooting the film!

Well, on that note, “A Writer’s Odyssey” features some stunning visual effects. As special effects technology becomes more accessible, would you like to make a Chinese “Lord of the Rings” or “Star Wars” that compares with the biggest Hollywood blockbusters?

Well, we blended some comic elements in the making and art design of the film, but this was actually my intention to add a new and younger perspective to traditional Chinese culture. We integrated things like different kinds of armor based upon different historical eras like the Tang Dynasty. So with all of these elements together, we aimed to present the story with new and different elements to the audience.

Well, you’ve really done something spectacular with “A Writer’s Odyssey.” Thank you Lu Yang, it’s been a real pleasure to interview you and we wish you all the best of success with A Writer’s Odyssey and your other upcoming action projects in 2021 too!

Thank you, glad to speak to Kung Fu Kingdom today.

Film poster for A Writers Odyssey 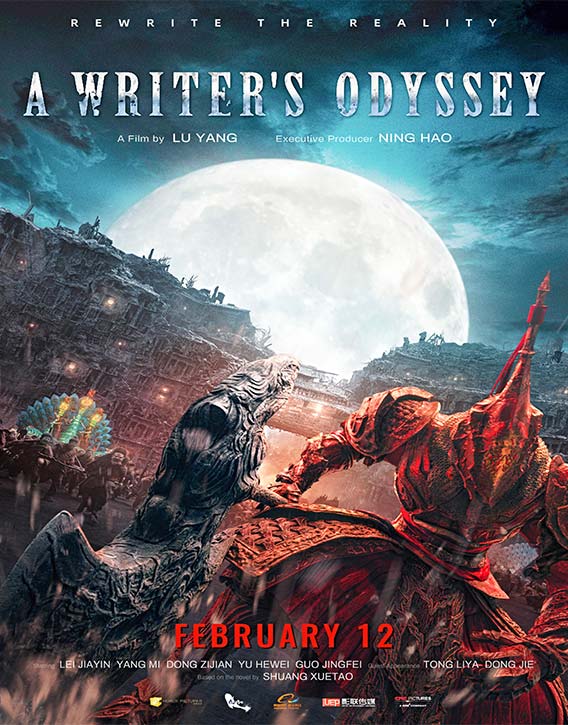 “A Writer’s Odyssey” is out now! Have you seen it? What are some of your favourite epic, fantasy, action-adventure films? What are your thoughts on Lu Yang’s “Brotherhood of Blades” movies? Let us know in the comments below; like, share and join in the conversation on Facebook and follow us on Twitter & Instagram.

GIVEN THE CHANCE…HOW WOULD YOU REWRITE THE SCRIPT OF YOUR LIFE ODYSSEY? Grab some ideas from the vault of the FUniverse with these movie reviews, exclusive interviews, Top 10’s, Top 5’s, RESCRIPT for NEXT-LEVEL RESPECT in Official KFK wear and subscribe for all kinds of UNLIKELY FU-PERHEROES on YouTube!