The 80’s action formula is a tried and tested mix, with their muscled-out main characters, big guns, explosions and excessive violence galore; you know the drill. But there’s always more than one way to write an equation, always something more you can add to that mix. To this end, “Extraction” takes the 80’s action palooza and bolsters it up with the wondrous technology of 2020 (something that seems to be en vogue these days) – but did it work? Read on and find out…

Based on the comic book “Ciudad” by Ande Parks, “Extraction” is Sam Hargrave’s directorial debut, with Anthony and Joe Russo of Marvel fame producing. Sam Hargrave has had an illustrious career coordinating for blockbuster franchises such as “The Hunger Games” and most notably being Chris Evans’ stunt double as Captain America from “Captain America: The Winter Soldier” onwards and being the stunt coordinator for a good number of other Marvel films, so he is no stranger to action.

Tyler Rake (Chris Hemsworth) is a former SASR (Special Air Service Regiment) operator turned black ops mercenary with a death wish due to losing his six year-old son. It is something that haunts him every waking moment.

He is hired to rescue the son of India’s biggest crime lord, who’s been kidnapped by a rival gang and held in Dhaka, Bangladesh.

You call that a knife THIS is a knife

Ive got you kid dont worry

Getting to him is relatively simple, but getting him out is the hard part; corrupt military and police at every turn and other gangsters acting out of their own self-interest ratchet up the stakes as they head towards…extraction! (That’s the idea.)

Sam Hargrave’s background as a stuntman is evident with the dynamic camerawork during the action set pieces. The choreography is front and center and does not cut with every hit – something many directors are guilty of. Every movement of every fight is clear, displaying focused intent.

The fights themselves are not the usual martial arts fare found in Asian cinema, but instead lean more towards the practical, grounded stuff that special ops units are taught to do, as per Tyler’s background.

To get away go underground

No time for selfies

Tyler tries to keep a gun up in most situations, as in any real-world scenario, it is more about survival and eliminating enemies efficiently than engaging in fisticuffs at every turn. The film never shies away from the visceral, gritty reality of such conflict thus very much earning its ‘R’ rating.

When all Else Fails, Revert Back to Gritty Fist Fights

When all else fails and Tyler has to engage in a fist fight, it’s nothing too flashy with, again, an emphasis on straight-line getting-the-job-done combat and being pragmatic. No high or jumping kicks here! He also makes good use of his environment, which is the smart thing to do. For instance, why hit someone with your fists when you can hit them with a coffee mug?

Getting the Point Across with Asian Persuasion

An interesting detail that martial arts aficionados will appreciate is that Tyler’s knife of choice is a kerambit; an Indonesian knife and one of the main weapons used in the martial art of Silat which can also be found in the Filipino martial arts (they spell it karambit). A kerambit is relatively rare to see in modern action movies, having chiefly become more familiar to moviegoers in recent times due to their extensive use in “The Raid” films.

With such proven talent behind the action and fight scenes, “Extraction” thrills audiences at every turn as you watch a man and a boy fight their way through a city that does not want to let them out.

Chris Hemsworth is believable as a tough-as-nails badass mercenary, but the film never makes him seem like Captain superman. He is dragged through hell and back as he fights against such overwhelming odds, having to always take the hard way out. 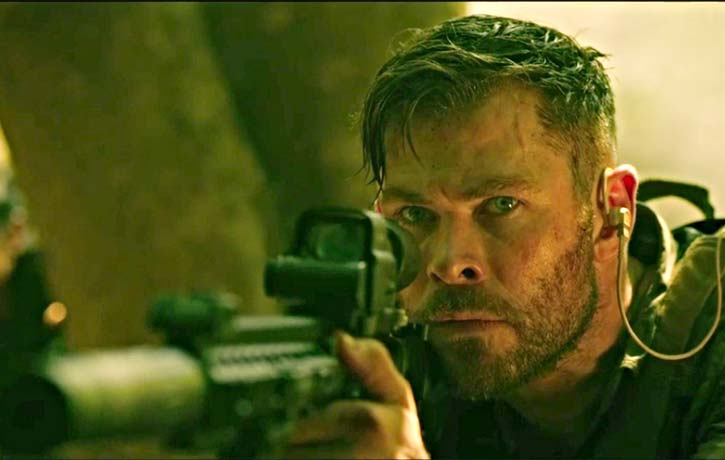 You can watch “Extraction” on Netflix right now! Are you a superhero or Chris Hemsworth fan? Do you think this gritty, visceral, more realistic fight style suits Chris better, especially now that part 2 has been greenlit? Let us know below and like, share and join in the conversation on Facebook and follow us on Twitter & Instagram.

EXTRACT MORE ACTION OF THE BLISTERING KIND FROM THE FUNIVERSE of news, Top 5’s, Top 10’s, deep-dive interview exclusives, extract a piece of KFK Official training GEAR FROM THE STORE and subscribe ON YouTube for more globe-trotting, international fight action!