A classic character from Japanese cinema reimagined and brought to life by one of Hollywood’s most enigmatic stars.

Ninja superstar Sho Kosugi makes an appearance as an un-named assassin hired to do battle with Rutger Hauer for the film’s finale.

Blinded by an explosion and left for dead in war torn Vietnam, Nick Parker is rescued by an indigenous tribe, healed and taught their secret sword fighting techniques. Parker returns to the United States, in search of old army buddy, Frank Devereaux, but discovers that he and his wife are divorced, and Frank is working as a chemist in Reno. When thugs working for casino boss McCready to whom Devereaux owes money try to kidnap his son as ransom and murder his ex-wife, Parker intervenes and becomes responsible for Billy who he is determined to reunite with his father.

Uncle Nick to the rescue 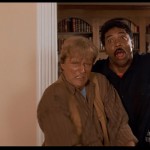 This bad guy gets the point literally

These thugs see through the blindmans disguise

The legend that is Sho Kosugi

The assassin has a different workout in mind

The film works well due to its script’s stead and seamless pacing covering Parker’s blindness, rescue, swordsmanship lessons and return to the US in just ten minutes. The scene is set with some comedy moments such as Parker dealing with thugs in a diner which are interwoven with action scenes that are elaborately choreographed and believable.

A saving grace is the script and actor’s portrayal of the titular blind swordsman in a more realistic fashion as opposed to the almost god-like Zatoichi. Parker is armed with his trusty blade disguised as a walking cane and yes he does formidable things like slicing a hornet in two. Yet at times he stumbles his way along, walking into gun barrels and mistaking roadside alligators for dogs.

However, when Parker fights he does so in a way you’d expect a blind man not to; always hitting the mark and using multiple moves to get his target. The realism is further demonstrated in the way he uses an opponent’s body as a map. In one scene Parker chops a gunman’s hand off at the wrist, by first running into him, feeling the arm, and then using those two actions as a guide to slice away.

Slag realises hes bitten off more than he can chew 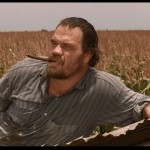 Slag lies in wait for his prey

Parker does his best work in the dark

Parker brings the house down

There are of course some crowd pleasing moments such as Parker slicing a baddie’s eyebrows clean off then declaring “I also do circumcision”, and the chase through the cornfield in which Parker takes out the pursuing redneck goons. It is Hauer’s stoic persona and impressive physicality that sell these scenes, giving a deadly zen-like quality to the sword play.

There is however a lack of charismatic bad guys, made up mostly of stereotypical rednecks complete with greasy mullets, with the exception of Randall “Tex” Cobb as Slag, a clever tactician who doesn’t underestimate Parker’s skill and of course the appearance of ninja movie legend, Sho Kosugi. There is still much fun to be had with plenty of shoot outs, a car chase with Parker behind the wheel and the much anticipated showdown between Kosugi and Parker which could have been longer in running time but is yet thrilling nonetheless.

“Blind Fury” is a predictable yet highly entertaining ride, with a refreshing balance of comedy and sword play splashed with a dash of fortune cookie-style philosophy. It does leave you wanting to see more especially of Rutger Hauer’s perfectly performed sword skills which the never-to-emerge sequel would have provided. Yet in its own right the film offers much for Zatoichi fans as producer Matheson, writer Carner and director Noyce do their utmost to embody the best of Japanese cinema’s favourite swordsman. Ultimately “Blind Fury” pleases the crowd and tickles the funny bone with a touching story held together by the ever charismatic Hauer.

Nick gets a lesson in swordplay

He also does circumcision

Driver Nick thinking about getting his license again

Armed and ready to fight